why don’t they condemn? 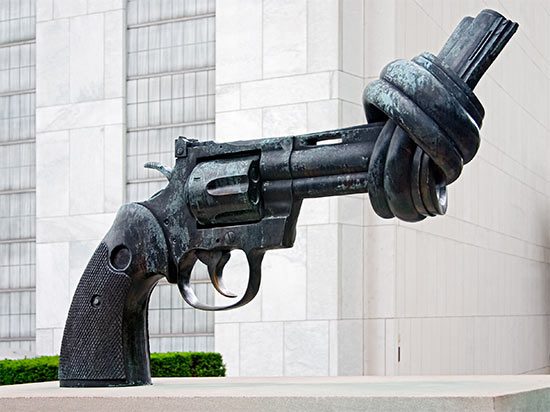 Ever since 9-11, and well before it, this is the litany of accusation that ordinary Muslim Americans have had to endure:

The very people who claim to be defenders of liberty are almost eager for an attack on a soft target like a school by Al Qaeda/Itranian/Shabab/ISIS/threat du jour to justify taking away the rights of religious freedom and due process from their fellow citizens. They pose as Islamsplainers, experts on a religion they despise, whose ijtihad is in curious sync with that of radical Islamists, which allows them to dismiss the living Islam of their neighbors.

This is why the gun ownership debate is so ironic. Let’s shift mindsets for a moment. There is a non-negligible overlap between Islamophobic authoritarians and gun ownership radicals: right-wing, conservative Republicans who profess unfettered freedom for themselves – primarily but not exclusively white, male, Christian – and claim victimhood by everyone else who dares assert a desire for those same freedoms.

Certain questions are worth asking:

I personally find the parallels to be striking. And I don’t think the answers to all of the above questions is necessarily yes.

The difference however is that ordinary Muslims have stepped up to the plate. Muslims *do* condemn – loudly, and often. Muslims are indispensable partners in the fight against preventing domestic terrorism. Muslims endure restrictions on their rights of freedom of religion that no other religious community must bear – for example, the Park 51 project in New York is dead. Compromises are made by Muslim communities in every state as they seek to build their own places of worship – usually in response to “concerns about traffic“. Christian and Jewish holidays are recognized by schools without complaint, but when NYC give kids a day off for Eid, or the Empire State Building glows green, it’s seen as “creeping shari’a”.

To date, responsible gun owners have not followed the example set by Muslims. They are silent in the face of mass shootings – and allow gun ownership radicals to speak for them, turning every somber tragedy into another excuse to push the obscene political talking point that “more guns would have prevented the tragedy”. Unlike Muslims, who understand that there is a problem, gun owners pretend there isn’t one – even though 10,000 Americans die every year from gun violence, whereas if you include 9-11, the average is 300. If you treat 9-11 like the obvious outlier it was, then the average deaths from terrorism is actually 30 per year (Keep in mind this definition of “terrorism” is only limited to radical Muslim violence – rightwing supremacist terrorists have killed twice as many people as radical Muslims since 9-11). Unlike Muslims, gun owners do not accept even the slightest infringement of their 2nd Amendment right in principle. Unlike Muslims, gun owners have not played any role in working with law enforcement and local police to prevent gun violence, even with respect to simple common sense policies like closing gun show loopholes.

After House hearing, countering #extremism must focus on all forms of #HVE, not just #Muslim #extremism #CVE2015 http://t.co/jrU0Q9lJDg

When gun owners begin to take the problem of gun violence as seriously as Muslim Americans do the threat of radical jihadism, then they will literally save thousands of lives.

Muslims are often lectured by Islamophobic authoritarians that the patience of the American people is finite. Just one more large-scale attack by radical jihadis will mean the end of our rights, and persecution of Muslim Americans (even internment) will be justified in the name of safety and self defense. The Constitution is not a suicide pact, we are told. (I happen to agree – but I interpret that phrase in exactly the opposite way). Well, gun owners: if the patience of the American people is indeed finite, surely you are closer to testing its limit than we Muslim Americans. Your fellow believers have inflicted much more death on this nation than ours. I urge you to follow our example in taking the threat seriously rather than crying victim. The real victims are those who were murdered.

So, when presented with the irony above, what’s the solution? One appealing idea – more Muslims need to join the NRA. I am absolutely serious. At the very least, it will make any mob inclined towards violence against us think twice. Islamophobia is not harmless – Bisara village in India is just one example of where we are potentially headed. But it would also be useful in blurring the lines between rigid ideological camps, and make everyone more receptive to pragmatic compromise. As a Muslim liberal, I cannot justify persecution of gun owners rights while asserting my own – and I sincerely believe that if gun owners come to the same conclusion, then we can actually make progress in terms of policy, and ameliorate two problems (Islamophobia and gun violence) at once. Together, we can save lives.

Related resource: The Mass Shooting Tracker, which accurately and reasonably defines a mass shooting as “when four or more people are shot in an event, or related series of events, likely without a cooling off period.” Also, President Obama has had 6 speeches in 6 years about gun violence – he’s right. Enduring this violence is a political choice.

a Republican, Muslim Mayor of St Louis?
archives most recent
More from Beliefnet and our partners
previous posts