My first day of wearing rida to school

Zainab Jamali is a teenaged Muslim American girl in Los Angeles. As a member of the Dawoodi Bohra community, she recently took her misaq (an oath marking the symbolic passage to adulthood) on the hand of the community’s spiritual leader, the 53rd Dai ul-Mutlaq, His Holiness Syedna (Mola) Mufaddal Saifuddin (TUS). After misaq, it is considered obligatory for women to dress in the traditional rida, an Islamic modesty garment akin to hijab. What follows is her first hand unedited account of her first day wearing her rida to middle school.

The perfect story is that as soon as Mola TUS said to wear a rida, I had no doubts. I didn’t even have to think twice. But that story is not mine. The choice of whether or not to wear a rida was very controversial in my mind. The fact that my parents said they would support me either way made it all the more difficult. I guess they thought it would make the decision easier, but it actually made it harder. I needed to know what the right thing to do was. Every time that I brought up the topic with my mom, her reply would be something along the lines of “Wait until you actually get your misaq, your view might change after.”

Sure enough, that is exactly what happened. Throughout the misaq, I listened and said “na’am” at the appropriate times, but when Mola TUS came to the verse where I made the promise to wear rida (among other things), I tensed up. But, when I walked out of that room, I myself was surprised that I had already made a decision. After making a promise that strong, that personal, and learning the consequences, my decision was made for me. How could I possibly break it the very next day?

I had made the decision but execution is always known to be the hard part. I woke up Wednesday morning (my first day of school after the ceremony) without the prompt of an alarm, totally aware of what was happening that day. My stomach actually hurt, I felt sick. As soon as I got out of the car, I saw my friend; she looked at me twice, then started up normal conversation. Internally, I breathed a sigh of relief. As people filed into the school, questions were asked. “What are you wearing?” “What’s up with your clothes?” “Why?” “You have to wear that for the rest of your life?!” As I answered them, a weight was lifted off my shoulders. My friends were basically behaving normally around me!

That is not to say it was all sparkles and rainbows, there were a few people who became awkward around me. Those people became kind of distant, but there was no bullying, name-calling, shunning, or total ignoring. I was prepared for the worst and overall, I think I got a pretty good deal. I was satisfied, even more than that, I was really happy. My friends were all the same, and I was all the same. In fact, I think that if you don’t be awkward about it, then they won’t be awkward about it. If you show them that underneath it all you are the same person, they won’t care as much. I realized, perhaps the best way to deal with those who felt awkward was not to take off my rida, but rather to wear my rida and be awesome.

There were some people who, I think, pretended to be positive, but were really thinking “What the heck?”, and that’s okay, because not everybody is going to accept you, whether or not you wear rida. As devout Muslims, we aren’t going to be normal anyway; we are not going to drink, date, or go to parties, and that’s obviously not a bad thing. I say, if you’re already different, why not embrace it? The next day, the amount of compliments I received was definitely more than I would have expected.

I was really scared on the first day—like, really scared. I am not going to tell you there is nothing to be afraid of; there might be after all. However, my positive experience surprised me. Not everybody will choose the same path, some may decide it’s not worth the risk. But if you’re inclined to take the leap, take it from me, it’s not as bad as your imagination tells you.

Related post: does the hijab protect women from harassment? 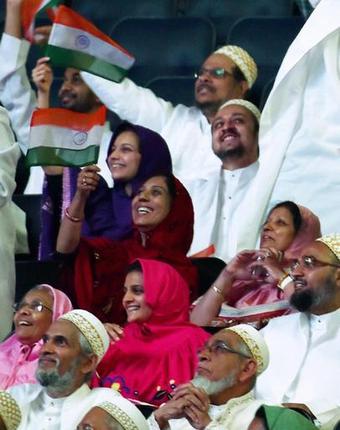