Two days before September 11th, 2001, Ahmed Shah Massoud was assassinated by Al Qaeda in Afghanistan. This man was the most celebrated warrior and hero of Afghanistan – a true strategic genius, who outfought first the Soviets and then the Taliban who followed. It is virtually certain that the assassination of Massoud was part of the broader Al Qaeda plan for inciting the muslim masses to war against the West, of which 9-11 was the centerpiece. It’s clear that had Massoud been alive, the history of the 9-11 decade would have unfolded much differently.

It is worth noting that Massoud was a visionary, able to inspire and lead his people from within their tradition, and yet also able to articulate a future for Afghanistan as united and free. He was perhaps the only man in Afghanistan who could have played the George Washington role for his nation – imagine America’s fate had Washington been murdered by loyalists at Mount Vernon the day before the Battle of Lexington and Concord!

As the tenth anniversary of 9-11 approaches, there will be much reflection and remembrance about what was after all a singular American tragedy. But even as we focus on the details and events of that day, we must not lose sight of the larger picture, of ideologies operating on a far larger scale, and of a commonality of dreams of people far removed from American shores. In fact, we must remember that we were attacked precisely because we are the inspiration for those dreams – dreams like those of Ahmed Shah Massoud, whose letter to the American People I now reproduce in full below. Read this letter and understand how the tragedy of September 9th, 2011 was handmaiden to our own just two days later. 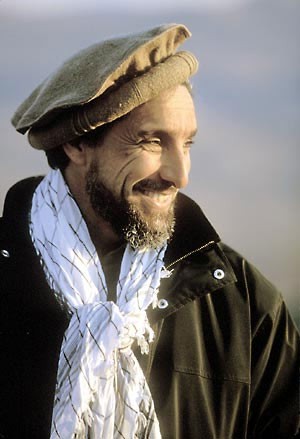 A Message to the People of the United States of America

I send this message to you today on behalf of the freedom and peace-loving people of Afghanistan, the Mujahedeen freedom fighters who resisted and defeated Soviet communism, the men and women who are still resisting oppression and foreign hegemony and, in the name of more than one and a half million Afghan martyrs who sacrificed their lives to uphold some of the same values and ideals shared by most Americans and Afghans alike. This is a crucial and unique moment in the history of Afghanistan and the world, a time when Afghanistan has crossed yet another threshold and is entering a new stage of struggle and resistance for its survival as a free nation and independent state.

I have spent the past 20 years, most of my youth and adult life, alongside my compatriots, at the service of the Afghan nation, fighting an uphill battle to preserve our freedom, independence, right to self-determination and dignity. Afghans fought for God and country, sometime alone, at other times with the support of the international community. Against all odds, we, meaning the free world and Afghans, halted and checkmated Soviet expansionism a decade ago. But the embattled people of my country did not savor the fruits of victory. Instead they were thrust in a whirlwind of foreign intrigue, deception, great-gamesmanship and internal strife. Our country and our noble people were brutalized, the victims of misplaced greed, hegemonic designs and ignorance. We Afghans erred too. Our shortcomings were as a result of political innocence, inexperience, vulnerability, victimization, bickering and inflated egos. But by no means does this justify what some of our so-called Cold War allies did to undermine this just victory and unleash their diabolical plans to destroy and subjugate Afghanistan.

Today, the world clearly sees and feels the results of such misguided and evil deeds. South-Central Asia is in turmoil, some countries on the brink of war. Illegal drug production, terrorist activities and planning are on the rise. Ethnic and religiously-motivated mass murders and forced displacements are taking place, and the most basic human and women’s rights are shamelessly violated. The country has gradually been occupied by fanatics, extremists, terrorists, mercenaries, drug Mafias and professional murderers. One faction, the Taliban, which by no means rightly represents Islam, Afghanistan or our centuries-old cultural heritage, has with direct foreign assistance exacerbated this explosive situation. They are unyielding and unwilling to talk or reach a compromise with any other Afghan side.

Unfortunately, this dark accomplishment could not have materialized without the direct support and involvement of influential governmental and non-governmental circles in Pakistan. Aside from receiving military logistics, fuel and arms from Pakistan, our intelligence reports indicate that more than 28,000 Pakistani citizens, including paramilitary personnel and military advisers are part of the Taliban occupation forces in various parts of Afghanistan. We currently hold more than 500 Pakistani citizens including military personnel in our POW camps. Three major concerns – namely terrorism, drugs and human rights – originate from Taliban-held areas but areinstigated from Pakistan, thus forming the inter-connecting angles of an evil triangle. For many Afghans, regardless of ethnicity or religion, Afghanistan, for the second time in one decade, is once again an occupied country.

Let me correct a few fallacies that are propagated by Taliban backers and their lobbies around the world. This situation over the short and long-run, even in case of total control by the Taliban, will not be to anyone’s interest. It will not result in stability, peace and prosperity in the region. The people of Afghanistan will not accept such a repressive regime. Regional countries will never feel secure and safe. Resistance will not end in Afghanistan, but will take on a new national dimension, encompassing all Afghan ethnic and social strata.

The goal is clear. Afghans want to regain their right to self-determination through a democratic or traditional mechanism acceptable to our people. No one group, faction or individual has the right to dictate or impose its will by force or proxy on others. But first, the obstacles have to be overcome, the war has to end, just peace established and a transitional administration set up to move us toward a representative government.

We are willing to move toward this noble goal. We consider this as part of our duty to defend humanity against the scourge of intolerance, violence and fanaticism. But the international community and the democracies of the world should not waste any valuable time, and instead play their critical role to assist in any way possible the valiant people of Afghanistan overcome the obstacles that exist on the path to freedom, peace, stability and prosperity.

Effective pressure should be exerted on those countries who stand against the aspirations of the people of Afghanistan. I urge you to engage in constructive and substantive discussions with our representatives and all Afghans who can and want to be part of a broad consensus for peace and freedom for Afghanistan.

With all due respect and my best wishes for the government and people of the United States,

Related: An excellent retrospective on 9-9 and Ahmed Shah Massoud by Paul Woodward in 2009, A piece in the New York Times about Massoud that ran one year after the assassination in 2002, and video at Euro News about how Afghanistan is remembering Massoud on the tenth anniversary. Also, see this excerpt from The Lion in Winter, a profile by National Geographic writer Sebastian Junger of Massoud in April 2001, just a few months before the assassination.

"The Domestic Crusaders" returns to NYC! buy your tickets NOW
archives most recent
More from Beliefnet and our partners
previous posts