In France, there has been a startling trend over the last few months. Their churches are being vandalized.

With the recent desecration of a dozen Catholic churches in France in just one week, investigators will not rule out the possibility of arson for the most recent fire at Notre Dame. Notre Dame is undoubtedly the most well-known landmark to be affected.

Paris’ second largest church, Saint-Sulpice, briefly burst into flames on March 17. The fire damaged the church’s doors and stained glass windows on the building’s exterior, but firefighters managed to bring it under control before anybody was hurt.

The fire that hit Saint-Sulpice reportedly started in a pile of clothes left outside the cathedral, before climbing up the door and to the stained glass. The clothes are believed to have been left there by a homeless person. Police said the fire was “not accidental,” but the pastor of Saint-Sulpice argued it was not an anti-religious attack.

Past just attacks on churches, other religious acts of vandalism include a cross of human excrement that was found in the southern city of Nimes, a statue of Mary that was smashed in a Paris suburb and a statue of Jesus decapitated in an Atlantic seaside resort with the very Christian name of Saint Gilles Croix de Vie (St. Giles, Cross of Life).

Some are pranks by youngsters tempted to deface a local church used mostly by older people in their town. With Sunday Mass attendance down to about 5 percent of all Catholics, many church buildings around the country do little more than mark the center of town. Church buildings are being closed down or regrouped into larger parishes, which means they’re often locked or empty for most of the week and an inviting target for vandals.

Thieves make up a second group attacking churches, which often contain gold-plated vessels, old paintings and elegant statues that, while not masterpieces, are worth a bit of cash on the black market. The government has a program to help churches finance better surveillance systems, but often it’s not enough or priests think regular locks are enough to protect their buildings.

The third group are those that are against the Catholic doctrine. These vandals tear down crosses, scatter consecrated hosts and smash statues to shock Catholics who consider these objects to be signs of their faith itself.

Incidents of these attacks have gotten little to no mention in the press. Apart from official denunciations of individual attacks, Catholic leaders in France have refrained from dramatizing what they say is a worrying trend.

“We adopt a reasonable attitude. We do not want to develop a discourse of persecution. We do not wish to complain,” Archbishop Georges Pontier, head of the French bishops conference, said when asked about attacks on churches.

The biggest uproar has come from conservative politicians.

“The images of flames in Saint Sulpice church this weekend are one more example of the violence committed against Catholics,” Philippe Gosselin and Annie Genevard said, referring to a recent blaze. 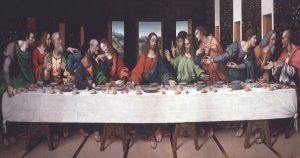 Site of the Last Supper? Archaeologists in Israel Make Incredible Discovery
archives most recent
More from Beliefnet and our partners
previous posts

Kentucky’s life-sized replica of Noah’s Ark has been lit up green to honor victims of coronavirus. The creationist ministry that operates it, called ‘Answers in Genesis’ say that the Ark encounter was lit green “to show compassion as the Bible instructs us.” “It is to show solidarity and compassion for Kentuckians, really” the co-founder Mike […]

Justin Bieber took to social media to host a discussion about the Gospel on Instagram with Los Angeles megachurch pastor Rich Wilkerson. Bieber started off the conversation by asking “Who is Jesus?” “What is the Gospel?” Wilkerson responded by saying “The gospel is the good news, and the good news of Jesus is that…all of […]