This week is Holy Week. For Christians across the globe, this week marks the anniversary of the most important and momentous moments in human history. As such, the crowds of pilgrims traveling to the Holy Land swell, and their numbers in Jerusalem grow enormously. Every one of them is hoping to walk where Jesus took His last steps and see the city where He spent the last few days of His Earthly life. One of the most popular places for pilgrims to visit is the Cenaculum, the site on Mount Zion that is traditionally identified with the Upper Room where Jesus and His apostles held the Last Supper.

The Cenaculum’s claim to the location of the Upper Room is obviously of a great deal of importance to many Christians. The ancient walls, worn surfaces and poor lighting, however, have made it difficult for researchers to study its history and verify its claim. In an exciting turn, those issues have become far less problematic obstacles due to advances in technology.

Israeli archaeologists recently used state-of-the-art technology to create a more complete picture of the purported Upper Room and its history.

“Using ground-penetrating radar, laser measurement, laser scanning, and an advanced photography technique, we managed to reach every corner of the Last Supper room. We managed to create an accurate 3-D model of the place.  We even managed to penetrate inside the ancient stones,” said archaeologist Amit Re’em.

Among the discoveries uncovered were the Lion of Judah and Angus Dei. Both were found on keystones in the arches of the room.

“[On] the keystone of the Gothic arches and on the keystone, where nobody saw before, you could see the holy lamb, the Agnus Dei… and the holy lamb is holding a flag – the victorious flag. Jesus holds the victory flag,” Re’em said. “[On another keystone] you can see the tail of the lion… you can see the leg and the head is a little bit broken. The Lion actually is the symbol of King David. Now we know according to the Bible that Jesus is the descendant of the Davidic dynasty.”

Beneath the current Crusader church, there is evidence of a Byzantine church that is nearly 1,000 years older.

“This church possessed many, many relics,” Re’em said. “According to the traditions in the story, the crown of thorns was here and maybe the Byzantines built their church on a much earlier and ancient sacred site.”

“The tradition regarding the Last Supper room is very, very old,” Re’em said. “It goes back for centuries… [As an archeologist, you] hear this ancient tradition [and] explore there because inside [the tradition] is embedded, is hidden some truth.”

One can only hope that the hidden truth in the Cenaculum comes to light quickly and gives pilgrims in Jerusalem something else extraordinary to celebrate this Holy Week. 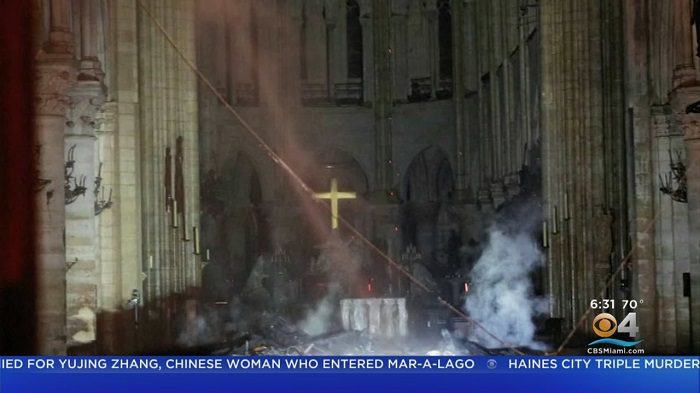 The Cross is Still Standing in Notre-Dame Cathedral, Some Calling it a Sign From God
archives most recent
Get the Christ News Today Bible Verses email newsletterpowered by ArcaMax
More from Beliefnet and our partners
previous posts