Conspirata— The Trials and Tribulations of Cicero 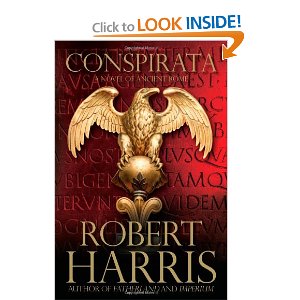 Robert Harris is perhaps not a name you will be familiar with, but he is a fine historical novelist indeed.  On this blog we have already reviewed his two previous novels about ancient  Rome— ‘Pompeii’  and ‘Imperium’  both of which are fine reads indeed.   This novel, published in 2010 by Simon and Schuster here in the States, surpasses both of the previous ones.   In it Harris continues the tale begun in ‘Imperium’ of the life and times of Marcus Tullius Cicero,  not merely the greatest orator of his age,  but the greatest politician as well, much great than either Pompey or Julius Caesar,  for the forte of both those men was the military, something Cicero almost entirely eschewed, as he abhorred violence. had no stomach for it at all.

The  novel is basically divided into two major parts, the first chronically the year of Cicero’s high water mark, politically speaking when he was consul in 63 B.C.  The second half could be called the denouement that followed in 62-58, ending with Cicero refusing to serve as Caesar’s legate and lackey, and instead choosing to go into exile and mourning.  It is surely clear enough that Harris doesn’t intend to stop there, as there is more to tell of Cicero’s subsequent life, so we may expect a trilogy on Cicero by Mssr. Harris and the third novel on the great statesman may be eagerly anticipated if its half as good as the second one.

‘Conspirata’  as  title gives away the fact that the real cause celebre in dealing with the year of Cicero’s consulship  was the conspiracy of Catalina and his cohorts.  Here we see up close  Cicero’s finest hour in preserving the old republic from violent, and internal overthrow.  Cicero’s great rhetorical skill is on full display in the courts and in the Senate as consul, and we gain a clear insight into the man himself, whose nickname,  Cicero, means Chickpea.   It may come as some surprise to our readers that Cicero was the constant companion of  John Adams and  Thomas Jefferson, both of whom called him Tully (after his actual nomen  Tullius) when it came to their trying to forge a democracy based on noble statecraft.  Again and again they read his speeches and treatises hoping to shape our fledgling country in a way that Cicero had shaped Rome.  And indeed both men gained a good measure of their eloquence and forensic skill from memorizing Cicero’s witty and wonderful rhetorical masterpieces.

Those wanting to understand the Greco-Roman world on the cusp of Roman Empire, could do worse than read Harris’ novels accompanied by the most readable of biographies of Cicero by Anthony Everitt (which I will review in a further post shortly).  Here laid out before our eyes, as seen through the eyes of Cicero’s remarkable scribe, Tiro is all the treachery, treason, tyranny, and yet also nobility and virtue of Roman conduct.  For a Christian, it becomes a peculiar read in some ways because some of the things Romans would not scruple at (a Roman army is not allowed to cross the pomerium [boundary] and enter the capital city ever, unless as part of a Roman triumph), we take for granted, and some of the things we have considerable scruples about (e.g. polytheism)  they would take for granted as normal and acceptable.  Here the mores and trials and tribulations of patricians are laid out for full viewing, and it produces a mixture of admiration and revulsion.

Cicero was that rare breed— an honest politician, but one who knew there were needs to compromise from time to time.   Like Cato,  the Stoic, Republican throwback to an earlier era, Cicero resisted the drift to Empire and dictatorship that Caesar and then his heir Octavian drove Rome to, in due course.  Along the way we learn much about Rome in the first century B.C. a city without a police force, a city without banks, a city without a public service branch of government. One quickly realizes how different that world was than ours.  But at the same time, one realizes that human nature has changed little since then, and the wiles of politicians even less.  Sometimes one wishes to kiss Cicero, sometimes to kill him as he weaves his way up the cursus honorum, serves as consul, lets his vanity regularly get the best of him,  but in a crisis, defends Rome against her greatest enemy— the enemy within.

I love lots of the different ancient Rome novel series, by Stephen Saylor, by Coleen McCullogh, by Lindsey Davis,  but Harris’ contribution is that he is in fact a better historian than most of these comrades in writing.  He also writes well and clearly.  And if you ever doubted how important rhetoric was in the ancient world, not merely in the law courts but in the forum and not merely in the forum but in the Senate, and not merely in the senate but at the games and in the agora, you have only to read a novel like this to see how much mere words were prized, and how powerful they could be in antiquity in a largely oral culture.   Caesar and Pompey both knew—- the pen is, in the end mightier than the sword, which is why both men tried to co-opt, marginalize, partner with, coddle, and neuter  Cicero.   But Cicero would not have— he would be no tyrant’s lackey, choosing rather to loose his home and go off into exile, as it turns out,  in Thessalonike.    You have to like the guy, even if you are apt to say with Hamlet after reading this novel—-

“What a piece of work is a man, how noble in reason, how
infinite in faculties, in form and moving how express and
admirable, in action how like an angel, in apprehension how like
a god! the beauty of the world, the paragon of animals–and yet,
to me, what is this quintessence of dust? Man delights not me.”

Has Mr. Fix Visited You? The Things Men Do to Avoid Real Work
archives most recent
More from Beliefnet and our partners
previous posts