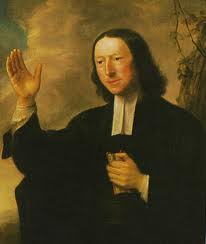 On  Dec. 17th, 2004 a memorial service was held for Edmund Robb Jr. in his beloved Marshall Texas.  I wish I could have been there, and I was so thankful that Steve Harper, the other member of the first class of John Wesley Fellows, was able to be present.  Ed Robb was a United Methodist Evangelist,  who came to nascent faith under the ministry of J.C. McPheeters at, of all places, Glide Memorial UMC in San Francisco.  McPheeters went on to become President of Asbury Seminary.   Ed was a charismatic evangelist, much like my home town hero, Billy Graham.   He was a man not only of remarkable oratorical gifts, he was in addition a gracious southern gentleman and a man deeply concerned about the drift of his church away from orthodoxy and more specifically Wesleyan orthodoxy.

In the mid-1970s,  Ed Robb gave an address at Lake Junaluska N.C. sharply criticizing United Methodist seminaries as bastians of liberalism without much if any real concern about our Wesleyan heritage.    He was called on this remark by none other than Albert Outler, a noted Wesley scholar at Perkins School of Theology, who ironically was training Ed’s son at the time. Outler and Robb had a heated conversation that led to a partnership and a friendship out of which was born A Foundation for Theological Education.

AFTE, as it came to be called was in the first place a scholarship fund, with a vision to renovate and restore our Methodist colleges and seminaries to a more orthodox Wesleyan orientation.  It was more of an unofficial missionary wing of the conservative part of the UMC, than just a scholarship fund.  And so it was not surprising that immediately AFTE began holding Christmas conferences at Shakertown Ky. with various Asbury profs as mentors of the first fellows chosen, including both Ken Kinghorn and later Bob Mulholland.  Those first few meetings in Shakertown, the first or second weekend of December, sought to emulate some of the elements of the first Methodist Christmas conference at Lovely Lane in Baltimore. We commited ourselves to the cause of Christ, to the renewal of the church as Wesley had done, to various spiritual disciplines, to the Wesleyan covenanting service, and so on.  This clearly was not your normal or average scholarship fund or program.

Ed Robb had a lover’s quarrel with his church. And he had a vision as to how to help fix the problem.  When we used to have the Ed Robb hour on Friday nights at our Christmas conferences at Shakertown, rocking away in our Shaker rockers, Ed would tell a tale of how he raised money for AFTE on a wing and prayer,  well actually lots of prayers.  He told how most of the gifts to AFTE were given by little old blue-haired Texas and Oklahoma ladies who knew and believed in Ed because he had done evangelistic services in their churches.  The average gift was no more than $25 at the outset of things in 1976-77. We have come a long way since then.

Today, as of this writing in December 2010 there are some 136 John Wesley Fellows, 85 have earned their doctorates, 36 are still pursuing their doctorates, 50 are professors or deans in seminaries (more than 10 at both Duke and Asbury), 24 are professors at colleges, and 1 is even a United Methodist Bishop.   It is a remarkable story, and one that is still unfolding.

Ed’s vision for AFTE was a broad one. He never insisted the Fellows sign some sort of narrow statement of faith or principles.  He simply called us all to orthodoxy, and on the matter of ‘mere opinions’  he said we should follow Mr. Wesley’s lead and think and let think.  He was a strong advocate of women in ministry, all the while being one of the most conservative Methodist leaders I had ever met.  He also imbibed Wesley’s Catholic Spirit, and so we had two colloquiums at Notre Dame  exploring among other things, the holiness tradition in both Methodist and Catholicism.

Ed was a churchman through and through.  His vision was that instead of leading a band of angry conservative Methodists out of the church, he would help it reform itself from the inside out.  I even remember him saying ‘My commitment to our church is unconditional.  Even if we make the mistake of starting to ordaining gays and lesbians,  I will live a Methodist and die a Methodist.’   He was a man of strong opinions, but he also knew how to be gracious to those with whom he strongly disagreed.  And he certainly got us all fired up with zeal for the renovation and renewal of our church.

In the early days, the going was rather rough. After initially meeting each year at Shakertown we began to ask if we could meet at the various United Methodist seminaries so those administrators and faculties could get to know us. We were actually locked out of one of these seminaries that had reluctantly agreed to allow us to meet there.   I remember one U.M. Dean, who shall remain nameless,  telling me personally that over his dead body would he hire a NT scholar like me.  I remember another saying that there should be no difference in the hiring practices at a U.M. seminary than at a secular graduate school of religion, which explains why there were a lot of non-Christians on divinity school and seminary faculties in our church.

Of course old dogmas die hard, especially the dogmas of the fundamentalist left end of the church, and perhaps also of the far right end of the church.  After being told I would never be hired by a U.M. school, of course my first job was teaching Wesley’s Standard Sermons at Duke Divinity school in their summer Pastor’s School.  Life never quite turns out like dogmatists expect, but some of those flaming liberals really had put the dog back in dogma in the late 70s and they barked a lot about and at the John Wesley Fellows then and later.  I am thankful our church has turned the page on those days, and John Wesley Fellows are making contributions all over our church, seminal contributions that are greatly appreciated.

I remember one Christmas Conference where Ed himself, who was always a great reader, and a model of life long learning, was reading to us from John Wesley himself about how Wesley did not fear that Methodism would one day die out, but that it would become a dead sect, with the form of true religion, but lacking the power.  Were Wesley alive today, I am quite sure that he would be proud of AFTE and the John Wesley Fellows who indeed have done much to fan the flames of revival in our church and particularly in its educational institutions.  We owe a lot to both Ed and his son Ed (who pastors a wonderful large UMC church in the Woodlands Texas) for keeping the flame burning and AFTE going for 33 years now.   The Lord has been good to us all, and as Mr. Wesley said— ‘he hath not finished with us yet’!