The Cadet Chapel At the Air Force Academy— Part One

During our free time our Yuliya (now working on her PhD at the U. of Chicago in Theology and the Arts) and I and our friend Roger Nelson  (aka John Wesley) went to see the spectacular Cadet Chapel at the Air Force Academy. What I did not know about this chapel is that is actually four chapels in one.  The main floor houses the Protestant Chapel, while down below there is a Catholic Chapel and a Jewish Chapel (synagogue?) and a Buddhist chapel (?). Note no mosque here.  This is a religious structure I have long wanted to see, and in my only previous trip to Colorado Springs, there was no time to do so at all.   A little background will help.

Robert E. McKee of Santa Fe New Mexico was contracted to build this incredible structure in 1959 and construct ensued on Aug. 28th of that year.  It was not completed until the summer of 1963. Within this structure there is a Protestant Chapel which seats 1200, with a 120 seat choir loft (and incredible organ), a Catholic chapel which seats 500 worshippers with an 80 seat choir loft, and a 100 seat Jewish chapel. There was also built an all faiths room down below as part of the initial construction, and more recently in 1999 a second larger All Faiths room was installed, which I guess is currently housing the Buddhist chapel.  Initially the shell of the building cost 3.5 million, with all the interior furnishing and organ being provided by private donations.  Interestingly, there was a designated Easter offering taken up at air force bases around the world in 1959 to help complete the interior.  Those were certainly different days.   The designer of the original building (not to be confused with the builder) was Walter Netsch of a huge architectural firm in Chicago— Skidmore, Owings and Merrill.

The 11 aluminum, glass, and steel structure features 17 spires, and no there is no symbolic significance to that number. Originally more spires were to be built, but in a cost cutting measure the design was cut down.  I had seen pictures of this place before, but honestly, I had no idea how spectacular this place really was.  In this first post I am serving up pictures of the Protestant chapel.  Other posts to follow.

One of the unique features of the inside of the Protestant chapel is stain glass windows in the ceiling itself, which create the blue glow you see in the picture above. 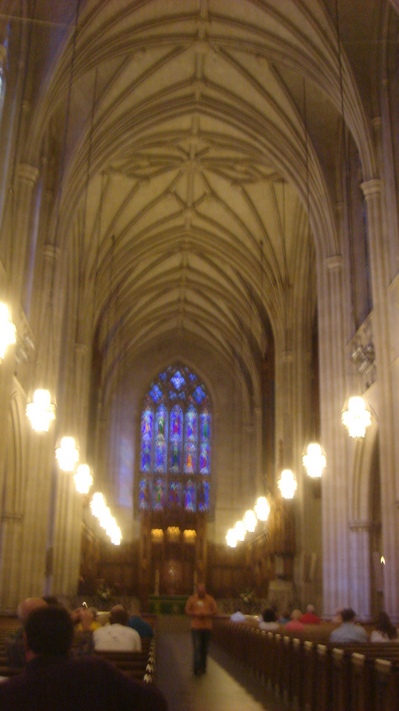 The Duke Convocation 2010-- N.T. Wright, Part One
archives most recent
More from Beliefnet and our partners
previous posts