The Sporting Life– What Happened to It? 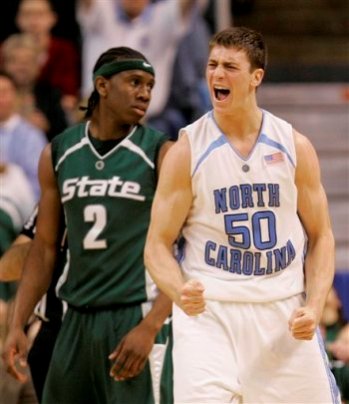 The coarsening of our culture has been going on for a long time, and nowhere is this more in evidence than in sports– high profile college, and also professional sports. Some of this is because of the seduction of money.  Colleges want the revenues that high revenue basketball and football programs make. Even smaller schools have gotten into the act. And lets not even talk about all the illegal recruiting practices and money under the table.  The old aphorism, ‘cheaters never prosper’  seems to be a mythical aphorism at this point. And then of course there is all the preening, trash talking, taunting and the like. Sportsmanship has also gone out the window.   Yes, once and while we have a feel good story on ESPN about a girl’s softball player who blows out her knee and is carried around the bases by players on the opposing team so she can have her home run.  But these stories are rare.  Its all about ‘win baby win’ and often at any cost, especially at the cost of sportsmanship, at the cost of education, at the cost of honesty, and I could go on.

But of course the gold standard for televised bad behavior comes from the NFL, and I am not even talking about the end zone dancing and trash talking… and T.O.ing, if I can coin a phrase. There was once a day where tackle football was tackle football. Any more it is mostly hit them football— hit them high, hit them low, go head hunting, it doesn’t matter. If you don’t get caught, who cares. And peoples bodies and indeed even their health can be destroyed. You should meet some of your gridiron heroes when they are 50— many of them can barely walk. Imagine what would happen if NFL defensive players were required to actually tackle people for the player to be considered down and the play over, as is the case in various forms of rugby?  What a concept.

People now go to football games to watch people get knocked silly, or in other words, for the same reason  some NASCAR junkies go to the track— to watch the spectacular crashes, and for the same reason some people go to hockey matches— hoping a championship wrestling match will break out.  And there is something sick about the fascination with watching others get hurt. It’s like people who stop by car crashes to see what happened, when they are being of no help or use whatsoever to those who have been harmed.

And then there is the way that money drives the whole enterprise.  Have you noticed that there is now only one day in the whole year that there are no major sporting events of any kind—- yes only one.  The day after the MLB All Star game in July.  That’s it.  It’s gotten so sad that ESPN is even reporting NFL around the year and around the clock in the off season.  And then there is the college basketball season that used to have March Madness.  Now March Madness starts only after a team has played about 34 games, and March is half over.  Soon it will be called April Madness.  I just hope they don’t start having the selection show on April 1.

So what’s my real beef?  After all,  I am a sports fan, especially for college basketball, and MLB baseball, and a bit of the NFL.  My real beef is that unfortunately the difference between winning and losing is money or cheating, or both, in far too many cases.  And  BTW have you seen the ticket prices at any professional sporting events lately?  Of course we could make the whole thing come crashing to a halt, if we boycotted these events massively, and refused to watch sports on TV.  Like that’s gonna happen.

It has been said that what finally caused the Roman Empire to come crashing to a halt is that people were spending more money on chariot races, gladiator battles, and ever popular barbecuing of Christians, or throwing them to the lions than on necessities.  Soldiers no longer wanted to fight in far flung frontiers, investors no longer wanted to invest in foreign assets, they preferred ‘out sourcing’ (!), and obesity had taken over the elites that controlled 96% of all the wealth. Oh yes, and the Senate couldn’t decide anything because legislators were in gridlock and they were on the payroll of major investors……. does this sound familiar????

Someday archaeologists will be digging up the once great American landscape and they will find gigantic concrete sports stadiums, with all sorts of luxury boxes.  And then they’ll find churches made out of plywood and press board and siding.  And homes made out the same thing.  And they will ask—- why did they spend more money on entertainment than on food, clothing shelter, and God combined?   And in the end—– who won???