Handel’s Messiah— the Story behind the Classic 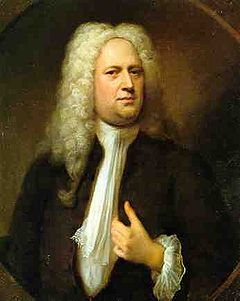 Without question, one of the most famous pieces of music ever written or performed is Handel’s Messiah.  Note that the title of this work is not ‘The Messiah’, but simply Messiah.  Above you will see one of the more flattering portraits of Handel.  Handel was a German born in Halle in 1685.  When he was old enough, because he wanted to compose opera, he moved to Italy at the invitation of the D’Medici family, but unfortunately for him, the Pope had banned opera at that time, and he found himself scrambling to compose occasion pieces. Eventually the ban was lifted and Handel had a successful opera entitled Agrippina, but by then he had become more famous for composing sacred music, for example his Dixit Dominus (‘Thus says the Lord) composed in 1707 became a very famous composition in due course.

In the beginnings of the 18th century there was much ferment and furor over what counted as sacred music and what counted as secular music.  Handel got caught in the crossfire to some extent.  Discouraged with the musical situation in Italy, Handel moved first to Germany and then to England in 1712 and by 1727 had become a naturalized citizen of the British realm. His timing here was better than in Italy because England came to have a King from Hanover in Germany, namely King George– the one the American colonists had so much trouble with.  In fact Handel had returned to Germany and had become the Kapellmeister for George the Elector of Haonver before he ever became King of England.  This augured will for his future and indeed Handel  In fact Handel’s relationship with King Geroge was an up and down affair.  In 1717 he composed the famous Water Music which was well liked, but in the what have you done for me lately department, it only brought Handel some temporary recognition and remuneration.

In 1725 Handel moved into a newly built flat on Brook Street in London where he was to live the rest of his life, dying in 1759. This house is today the well known Handel House museum, and well worth a visit too.  Below you will see its picture. The building has a shop on the first floor called Regina Rubens. 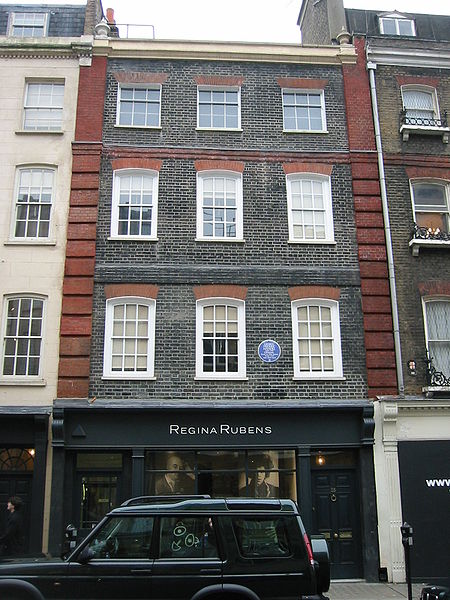 In April of 1737 at 52 Handel seems to have suffered from a stroke which incapacitated him, making it impossible for him to perform (he played the spinet or keyboard) or conduct, because it had paralyzed his right arm and he was right handed. He also complained of blurred vision. The truth was as well, that falling in and out of favor with royalty left him alternately in and out of money, and because he was not a wise businessman he in fact lost a fortune in the opera business and, depressed and in debt, gave it up in 1740.

It was only shortly after these calamities in Handel’s life that he came across a libretto composed by Charles Jennens. Composed entirely of Scripture portions, mainly from the OT, Handel was deeply affected when he read this libretto.  It was divided into three parts: 1) prophecies about the coming messiah (largely drawing on Isaiah); 2) the birth, life, ministry, death, resurrection of Christ; 3) the End times with Christ’s final victory over sin and death, largely based in the book of Revelation. Inspired,  Handel decided he must compose an oratorio based on this libretto. The story of the composition of this most famous of all Christian musical works has been told variously. What we can say with certainty is that he composed the work in a short period of time during the summer of 1741, and when he got to the Hallelujah chorus, his assistant found him in tears saying “I did think I saw heaven open, and saw the very face of God”.  Today of course it is the first two parts of this work that mostly get performed.  The Hallelujah chorus is in fact the conclusion of part two, but in performances today it regularly is used to climax and conclude the Christmas performance of the first part of the oratorio.

The work first premiered during the Easter season in April 1742,  and interestingly enough John Wesley was one of the ones who saw an early performance of this work. In his Journal he commented “there were some parts that were affecting, but I doubt it has staying power”. It’s a good thing he didn’t go into the music business. His brother Charles actually got to know Handel a bit before Handel died, and visited him in his London home on more than one occasion. Charles of course composed two well known Christmas hymns— Lo he Comes with Clouds Descending, and  the more familiar Hark the Herald Angels Sing.  Unlike Handel he was a writer of lyrics not primarily a composer of music, which was Handel’s forte.

While it would certainly be too much to call it an overnight sensation, it is clear that this work quickly became very popular and was soon to be seen as a classic.  What is interesting is that Handel kept tinkering with it and changing it. As one source says

“Handel conducted Messiah many times and often altered the
music to suit the needs of the singers and orchestra he had available
to him for each performance. In consequence, no single version can be
regarded as the “authentic” one. Many more variations and
rearrangements were added in subsequent centuries–a notable arrangement
was one by Mozart, translated into German. In the Mozart version a French horn replaces the trumpet on ‘The Trumpets shall sound’, even though Luther’s bible translation speaks of a last trombone. In fact of course the libretto was based on the Authorized or King James Version, except the portions from the Psalms which were extracted from the Great Bible as it was found in the readings in the BCP, the Book of Common Prayer.

Fortunately for Handel, King George decided that this work was worthy of being attended and supported, and this in turn led to one of the most interesting traditions connected to this masterpiece. When the Hallelujah chorus began to play in the performance the King attended he abruptly stood up, apparently as a way of indicating he recognized that Christ was the King of Kings. Now it was normal protocol that if the King stood at any time, no one in his presence sat, and so the entire audience stood for the performance of the Hallelujah Chorus.  This tradition has been maintained even until today.  This morning in Estes Chapel we did our annual Messiah singalong complete with fine soloists and a small chamber orchestra. And sure enough, everyone knew to stand when we got to the Hallelujah chorus.  Handel could never have anticipated that this work would become perhaps the most performed piece of classical music in all of history, all to the glory of Christ.  And he certainly could not have anticipated the many and various versions of the performance of Messiah.   For example,  here is a sample from a group that calls itself the silent monks

My hope for you is that you will have the blessing of hearing some or all of this oratorio during this holiday season. Even if you are not a classical music buff, you can Handel it once and a while 🙂
BW3