The Indelible Image– The Interview 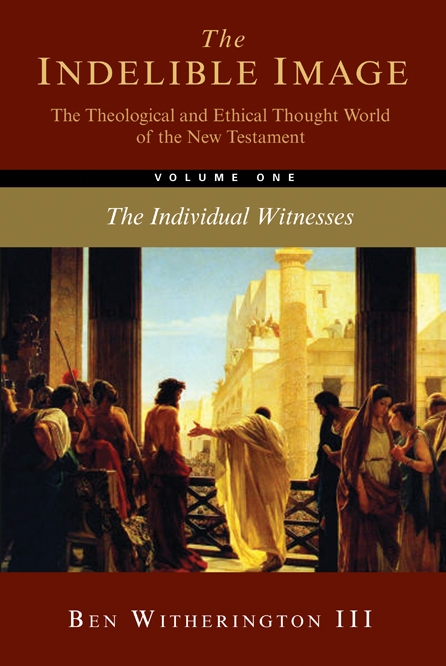 The following is an interview that appeared in the periodical Academic Alert.

The Indelible Image: The Theological and Ethical Thought
Word of the New Testament

Within the next few months Ben Witherington–Amos Professor of New Testament
for Doctoral Studies, Asbury Theological Seminary, Doctoral Faculty St. Mary’s College, St.
Andrews University, and the fastest two fingers in the East–has two
800+-page volumes coming out from IVP Academic entitled: The Indelible
Image: The Theological and Ethical Thought Word of the New Testament. The
two volumes make a double-pass through the New Testament material in analytic
(volume 1, The Individual Witnesses) and then synthetic fashion
(volume 2, The Collective Witness). Senior Editor Jim Hoover interviewed
Ben recently to glean his thoughts on the project.

Hoover:
Ben, I suppose the first thing to be noted is that you tackled this
project only after having written commentaries on all of the books of the New
Testament. Few scholars in the recent past have even attempted, let alone
accomplished, such a feat. Why did you think it was important for you to do the
commentary project first before launching into New Testament theology and
ethics, and how, in particular, do you think this has influenced the project?

Witherington: Two reasons. First, I don’t think a
theological or ethical reading of the text can be done properly without first
doing the heavy lifting of detailed exegesis of the text. Second, I felt I
needed to see the whole scope of the theological and ethical witness of the New
Testament. Most of the time New Testament theologies and New Testament ethics
focus too much on the so-called major witnesses–the Evangelists, Paul the Johannine
literature. This assumes that some portions of the New Testament are more
important than others, assumes a sort of canon within the canon. I don’t see
this as a helpful or appropriate approach if the goal is New Testament theology
and ethics.

Hoover:
As you say, you deliberately set out to give the lesser-know and
lesser-appreciated witnesses in the New Testament their due. What sorts of
things do you think we would miss by concentrating on the so-called major
witnesses?

Witherington: A lot. We would miss entirely, for
example the way the teaching of Jesus was reapplied and reused in James, the
way that all sorts of apostolic teaching was reused and combined in 2 Peter and
the fact that we can become partakers of the divine nature through Christ. We
would miss the most profound use of Isaiah to explain the suffering and death
of Jesus in 1 Peter, and we would miss the strong prophetic witness of Jesus’
brother Jude.

Witherington:  Well,
I would say there is unity amid the diversity, and the study of all these books
in detail has simply vindicated that assumption. What was especially impressive
to me is that there is as much ethical unity in the New Testament as
theological unity, and without collaboration or corroboration in some cases. It
must be a Holy Spirit thing.

Hoover:
Why have you felt it important to address both theology and ethics together
in this project?

Witherington: Because,
despite the history of Protestant exegesis and theology, the two are profoundly
intertwined and interdependent on each other. The theology has ethical
implications and applications, and there are no ethics in the New Testament
that are not profoundly theological.

Hoover:
What challenges and advantages has this presentation given to your work?

Witherington: The big challenge was to manage to keep
the whole spectrum of the witnesses in my brain at one time so I could see the
relationship of the parts to the whole. The advantage of my approach, which
suggests that the New Testament is like an oratorio about the Messiah, his
person, words and works, is that it is both comprehensive and intensive and
sees the unity as well as the diversity of the whole.

Hoover:
What themes and concerns have come to the fore? In particular, what’s the
significance of your title?

Witherington: Excellent question. After much
pondering I discovered that one of the keys to understanding the relationship
between theology and ethics in the New Testament is the discussion of the image
of God–the imago Dei–in humankind and its restoration in Christ. For
example, as Philippians 2:5-11 puts it, we are to have the same mind in us that
was also in Christ Jesus, the perfect image of God on earth. How is this
possible? The answer is that we too are created in God’s image and through
Christ renewed in that image for good works. The ethics is the working out of
the theology in human lives and actions. The theology explains the basis for
such exhortation and why it is possible to respond to the exhortations (because
we are being recreated in Christ’s image).

Hoover:
I suspect you didn’t know this, though I doubt you’ll be surprised by the fact,
but you use the words righteous/unrighteous or related words 289 times
in your first volume. As you know, the terms righteousness of God and of
Christ have been hotly disputed–objective or subjective genitive,
covenantal or forensic emphasis? Where do you land?

Witherington: I have become increasingly convinced
that this language is not the language of covenantal faithfulness–the OT
background for which is h9esed, not
s9add|=q/s9e6da4qa= –nor is it merely the
language of forensic righteousness, focusing on right standing with God, though
that is part of the truth. Rather, the righteousness of God has to do with
God’s character and his efforts to give us an extreme makeover in God’s image,
so that we have both right standing with God and manifest the actual righteous
character of our God. In short, it is about both justification and
sanctification, about both our position and our condition, as well as about God’s.

Hoover: In the 90s you published a series of books on
Jesus–The Christology of Jesus (1990), Jesus the Sage (1994) and Jesus
the Seer (1999), not to mention two editions of The Jesus Quest (1995
and 1997), though the latter two are more of a survey of the state of Jesus
studies at the time than your own contribution to the field as is the case with
the other three books. The first of these studies was written nearly twenty
years ago, and the latest ten years ago. How have your views of Jesus shifted or
been nuanced in this new two-volume set? Which of your views, would you say, have
been solidified or reinforced?

Witherington:  I
would not say that my views have changed in any significant ways about Jesus.
One thing that has been further confirmed over the years is that Jesus had a
very exalted view of himself and his ministry, and exegeted himself and his
work out of texts like Daniel 7, Isaiah 40-66, Psalm 2, and the book of
Zechariah.

Hoover:
Also in the 90s, about ten years ago now, you did a reappraisal of the
historical  Paul, entitled The Paul
Quest. In what ways did that research shape your views in these two new
volumes?

Witherington:  It
set me in motion for realizing how important Paul’s ethics were to his
theologizing and vice versa. It also made clear to me that in some cases the
Reformer did Paul no service by setting up contrasts between law and grace, or
between Paul and James and the like.

Hoover:
I don’t suppose it would be right to end this interview without asking what
you hope readers will most get out of your project.

Witherington: I have hopes that this project will
give the patient reader a clear glimpse of both the unity and diversity of our New
Testament, and especially how Christ is at the heart of the matter when it
comes to both theology and ethics. I would hope it would lead us to “see him
more clearly, love him more dearly, and follow him more nearly, day by day.”

Joseph and the Egyptian Coins?
archives most recent
More from Beliefnet and our partners
previous posts