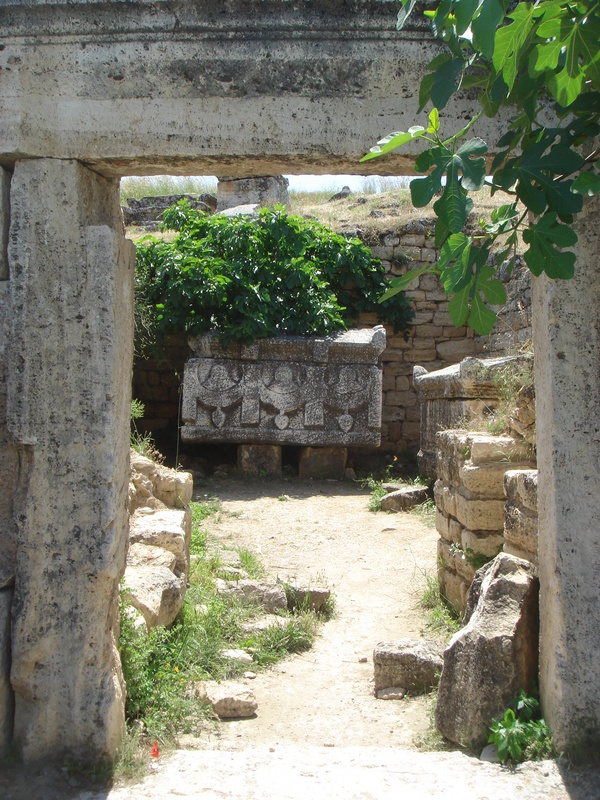 Sometimes you are just wandering around in a graveyard and you find something remarkable. In this case I was actually looking for something Mark Fairchild, my fellow explorer of Turkey told me about— a grave stele for someone named Papias, lodged in the courtyard of the Hierapolis museum.  After scouring the landscape, I finally came across what you see below. 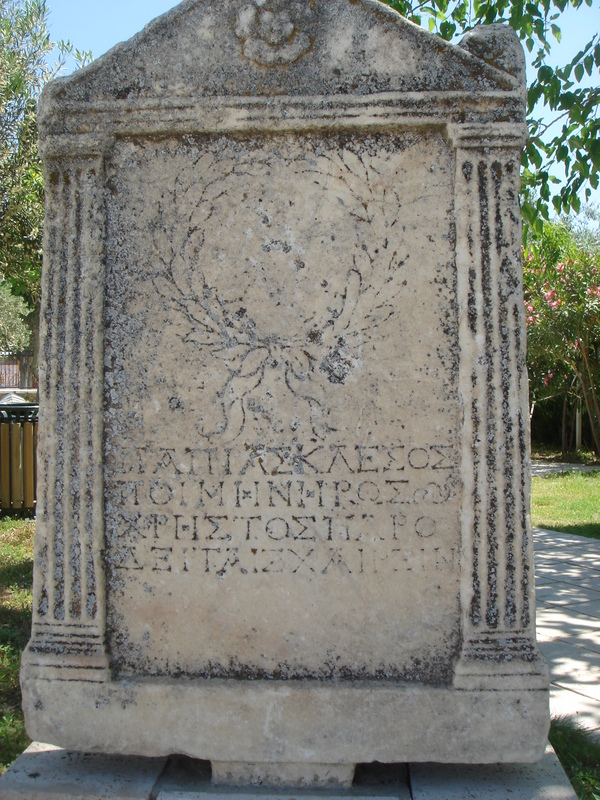 Sure enough we have here a grave stele for a man named Papias Klesos as the first line of the inscription informs us.  This stele was said to be found in Laodicea, which raises an immediate question if we are going to try and connect it with Bishop Papias since he lived across the valley in Hierapolis, but then his episcopal region would surely have included the other two cities in the Lycus valley— Colossae and Laodicea in addition to Hierapolis which seems to have been the center of things Christian in the valley in the early second century.   So lets look a little closer at the inscription and see what else it says. 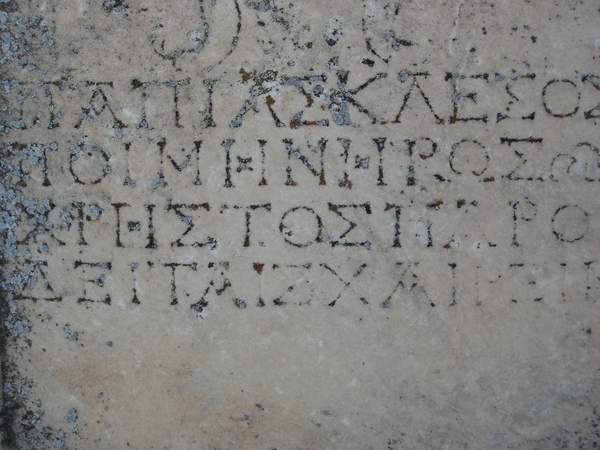 The second line indicates that the Papias in question was a shepherd of some sort.  Now this immediately raises questions, because shepherds were blue collar workers, not likely to be able to afford a nice grave stele like this one, nor is it likely their family could.  Someone erected this stele in Papias’ honor, and his honor claim involves being a shepherd, which frankly was a dirty profession, and not highly regarded by various high status Greco-Roman persons. Our modern bucolic notions about shepherding should not be read back into the world of early Christianity.

Now the third line in the inscription has the word CHRESTOS which was sometimes mistaken for CHRISTOS, but it appears often enough in ancient inscriptions and has a meaning range from upright to worthy to anointed. It is an honorific adjective in any case. Let’s suppose for a moment it means any one of these three possibilities.  Its not the sort of honorific inscription one might expect for a literal shepherd. But let us suppose it is a character description for a Christian leader who is a morally upright shepherdof his people and is being honored for his leadership.   The last line of the inscription is more mundane— ‘to those passing by, Greetings!’  As you know however, the word ‘grace’ is in fact a modified form of the word greetings, and when one couples this with the double entendre CHRESTOS it is more than possible that this is a Christian inscription made generic enough that the casual observer would see this as a normal grave inscription, but the Christian might well make more of it.  It is of course odd to us that a deceased person would be portrayed as greeting the passerby, but a Christian might well think of a grace wish to passersby.

If we take all of this together it is indeed possible that this is the grave stele of Bishop Papias though we certainly can’t be sure by any means. It certainly is the grave stele of an honorable and probably relatively high status Christian.  What we know about Papias is that he seems to have died a martyr in Smyrna (Izmir).  But perhaps his flock chose to honor him in this generic way thereafter.  The early second century was a dicey time for Christians in western Turkey as is evident from reading Pliny’s letter to Trajan asking what to do with Christians handed over for practicing a ‘superstition’.   See what you think and weigh in.