The Ark of the Covenant in Ethiopia— or Not

Not for the first time and undoubtedly not for the last, the Orthodox Church of Ethiopia is claiming it has the original Ark of the Covenant spoken of in the Bible, and made famous all over again by Indiana Jones.  What is new about all this is that the Patriarch of the Ethiopian Orthodox Church says he will be unveiling it for all the world to see soon and very soon.   Here is a link to the story
http://weeklyworldnews.com/headlines/9322/ark-of-the-covenant-revealed/

I must confess that I am more than just a tad skeptical that this ark has anything to do with the original ark of the covenant.  Why not? Well, lets start with the fact that according to Orthodox tradition the ark was brought to Ethiopia by Menilik I who was supposedly Solomon’s son which he had with the Queen of Sheba (who knew?). This claim is not based in any ancient sources known to date prior to the time of Jesus.  What the Bible says is that Solomon’s son was Rehoboam, and no sexual dalliance, never mind marriage to the Queen of Sheba is mentioned in the Bible. 1 Kngs 10.13 refers to Solomon giving the Queen various goods, in a reciprocity exchange meant to cement a positive relationship between the two peoples.  When Solomon is said to have had sexual relationships with foreign women, the text is quite explicit and names the countries from which they came ( 1 Kngs. 11.1ff.) Neither the Queen of Sheba, nor anyone else from Sheba is mentioned.

But besides this fact, there is no good reason whatsoever why any son of Solomon would cart the ark off to Ethiopia. Judea was not under attack by any of the neighboring super powers such as Egypt during the reign of the son of Solomon and the Temple had of course been built in Jerusalem in part to house the ark of the covenant in the first place.  Furthermore, the evidence as far as it goes suggests that Sheba (or Saba) was the country known as Yemen on the east side of the Red Sea, not Ethiopia which is on the west side of that sea, though this matter is debated, and some think Saba included territory on both sides of the sea.

Here below you will find a picture of the little shrine in Ethiopia where the ark is now housed. 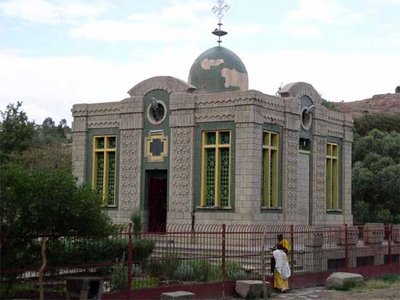 Stay tuned for more ‘revelations’, but as my granny once said— “Don’t be so open minded that your brains fall out”.
read next post