Q AND A WITH BISHOP WRIGHT ON ‘JUSTIFICATION’

Q: Tom you have been challenged repeatedly by some of yourReformed critics on the issue of imputed righteousness and the glory of God.Would you say these are the main problems when you have a discussion about justificationwith these critics?

A.Iwouldn’t say they are the two main problems, no. I set out what I see as theprimary questions in the preface. Underneath even those there is the challengeabout whether one reads scripture as a set of proof-texts to dogmas alreadygiven — prooftexts detached from their contexts — or whether one allowsscripture itself to set, and re-set, the terms of what we’re talking about. Andscripture itself suggests that the whole western tradition, from mediaevalcatholicism onwards, has dangerously skewed the focus of discussion to ‘me andmy getting to heaven’ rather than to ‘God and God’s kingdom coming on earth asin heaven’. The irony is that Piper’s concern for the glory of God reflectsexactly this biblical emphasis but he doesn’t allow it to do what it should,but instead distorts it into a particular sub-variant of the reformationtradition of imputed righteousness…

Q. If you were actually able to have a conversation with theReformers, particularly Luther and Calvin what would you want to ask them?

A.  The first question I’dwant to discuss with Luther, Calvin etc is the actual line of thought inGalatians and Romans — i.e. what is Paul actually talking about? They wereexegetes to a man, and insisted on that, and I think they’d be open to thatdiscussion… I would then want to ask whether they think it possible that theymay be still asking a mediaeval question to which they’re trying to give abiblical answer, rather than reframing the question itself. That, too, I thinkthey would understand.

The New Perspective has been helpful in all sorts of ways but also a hindrance.There are as many New Perspectives as there are people writing about it. Itgets muddled up with quite different agendas. As I’ve often said, the trick toaim for is to recover the first-century questions and try to give twenty-firstcentury answers, rather than taking sixteenth-century questions and givingnineteenth-century answers…

Q.What were you trying to accomplish in your discussion and relating of God’srighteousness and covenant faithfulness?

A.I tried to show that the two go together. The basic ‘lawcourt’ theme is thehome base and the ‘covenant’ theme a particular extension of it: when God makesthe covenant he will then be true to it etc. Paul was, I believe, demonstrablyusing the phrase in the sense it has in many of the Psalms and, particularly,in Isaiah 40-55.  This isn’t ‘covenantfaithfulness’ versus ‘character’. God’s faithfulness is part of his character,and both fall under the rubric of his righteousness.

Q.Why does there seem to be such a disconnect between the way systematicians readPaul’s discussion of the Law and the way most exegetes do?  And why has there been such animus towardsthe New Perspective when it comes to Paul’s view of the Law?

A.I think it’s simply the pragmatic fact that when you read Paul within hisfirst-century Jewish context he ends up saying things the tradition didn’t wantto hear — so they try to rule the context out of order. Frankly, if that studyhad shown up some kind of Reformed meaning as deeply embedded in the texts readwithin first-century Judaism they would be just as quick to hail it.

Systematicians have long given up on serious exegesis having (in some cases)waited for ages to see it produce ‘useable’ results, only to wait in vain.Hence the scattered approach. I look forward to a day when utterly serioushistorical exegesis of whole texts, not just prooftexts, will be seen bysystematicians as the real blessing it is. Bauckham’s work is of course a modelhere.

Q. Share with us briefly about your take on Romans 3.21 and why you translate it as you do?

A.  I think we should translate ‘apart from thelaw THE righteousness of God has been revealed’ — despite the absence of thedefinite article in the Gk of 3.21.

I don’t think it’s as easy as ‘how many covenants’. That’s an oversystematizedway of looking at it. Clearly Paul and Hebrews — and Jesus himself — draw onthe Jeremiah New Covenant theme, but equally clearly all of the above also seewhat is accomplished through Jesus’ death and resurrection and the gift of the Spiritas the fulfilling of the promises to Abraham and of the real intent of evenTorah itself.

It becomes clearer in this new book that Dan. 9 is crucial to your reading of the situation in Jesus’ day, namely the view that Jews still saw themselves as in exile due to the occupation of their land by and its puppets.  But when I look at Jesus’ own teaching on himself and these matters it seems to have much more to do with Dan. 7.  Would you not also agree that particularly in Paul, the new covenant is seen as the fulfillment of the Abrahamic covenant, and indeed the covenant that replaces the Mosaic covenant?

A.I agree Dan 7 is vital but Dan 9 is also up there — that’s where you get thechronology, plus the ‘abomination of desolation’, and the making ofatonement…

I basically agree about Abraham and Moses. Certainly that is exactly what’sgoing on in Gal 3.

You seem to argue that initial justification and final justification are on the same basis, but you also take seriously that there will be a judgment of human works, including the works of Christians.  Are you saying that apostasy is possible for Christians, or do you take the more Reformed view that those who fall away were probably not Christians in the first place, being self-deceived?

A. The initial verdict is the true anticipation of the final one because God will complete the good work he has begun (Philippians 1). That doesn’t lead Paul to a careless, oh-well-I’m-going-to-make-it-so-who-cares stance, because there is always the possibility that he is self-deceived and that having preached to others he himself will be a castaway (1 Cor 9). But I see that possibility as self-deception about genuine faith rather than faith today and apostasy tomorrow. Pastorally this may be a hard call for oneself and for others, which is why all the time the focus has to be away from oneself and towards God. Which is why the disciplines of scripture, sacrament and service to the poor are all vital…

Q.Say a bit more about the relationship between God’s righteousness and theredemption of creation, as well as about mercantile image of exchange—Abraham’s faith was credited as Abraham’s righteousness, according to Rom. 4.

A.God’s righteousness is his faithfulness to creation, not just to (and actuallyprior to) covenant — a point E. Kasemann got right, though he eliminatedcovenant in order to do so! God rescues Abraham so that through him and hisfamily he can rescue humankind and hence creation. That link is vital tounderstand Paul. The mercantile image is important but is ‘nested’ within thelarger covenantal framework. And yes, this does generate a Pauline ecclesiologysuch as we find, splendidly, throughout Ephesians. I appreciate that liberal Protestantswho don’t like this conclusion are at liberty to say that Paul didn’t writeEphesians. But it’s surprising to find conservative Protestants, who ought tobelieve that Ephesians is just as important as Galatians and Romans, simplyignoring the way in which justification there (2.8-10) forms part of the largerwhole of chapters 1-3 . . . 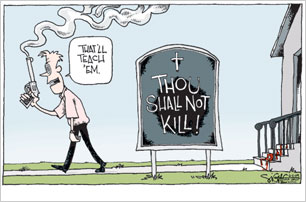 NO SAFETY IN THE SANCTUARY: ABORTION DOCTOR BRUTALLY MURDERED IN CHURCH
archives most recent
More from Beliefnet and our partners
previous posts