AN ‘UP-LIFTING’ AND CAUTIONARY TALE 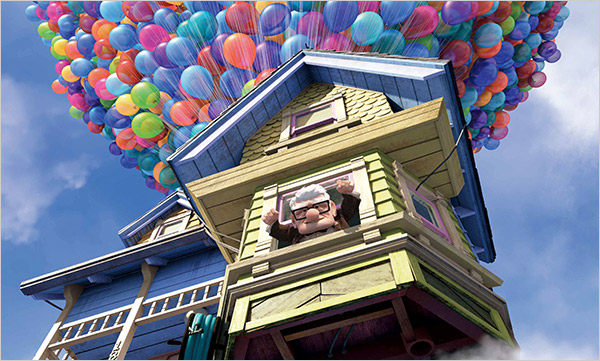 I must confess that I have a certain bias towards Pixar films. They are some of the most creative computer generated features out there, and not just because of their technical prowess.  Often the stories are moving or at least meaningful and the result is movie magic. So it was with a sense of anticipation that I went to see ‘Up’ on its maiden voyage today, having read the reviews which gave it a 98% approval rating, which is higher than any other recent film with the exception of the rebooting of Star Trek.

The formula by now has become familiar for Pixar films.  We need talking animals or toys or contraptions or super duper humans or humorous characters (think Toy Story, the Incredibles, Ice Age, Wall-E etc.).  We also need pathos generated by cute children or a semi-tragic tale which redeems itself near the end. And we need a subplot or at least a moral. In ‘Up’ the moral has to do with learning that a relentless pursuit of your dreams or adventures can lead you to be less than full human towards others, and indeed blind you to the possibility that other adventures and dreams may be better for you, more accessible, more fulfilling.

I can relate to this message.  I began my teaching career at Duke, and as a N.C. native I figured that my dream of coming home to N.C. to teach would quickly materialize. What I learned along the way is that if you love your dream more than you love your God, God will require that dream of you, and give you another in its place, if you are only open to see it.  In the case of old man Carl Fredricksen, voiced ably by a suitably crochety Ed Asner,  the dream of going to Paradise Falls in South America is finally realized at the 11 hour, only for Carl to realize that this was not intended to be his final destination, destiny, or desideratum.  Other adventures awaited him.

This movie begins like an old-time flick with a news reel about a great explorer, Charles Muntz, tracking pre-historic creatures that he claimed still existed.  He was the hero of a young Carl Fredricksen, but he would learn in due course that heroes are often not what you imagined them to be.  Christopher Plummer ably plays Muntz though the computer generated images we get of him especially at the outset of the film make him look like Errol Flynn.  We are told mostly in silence, like the old films, the tale of  Carl’s meeting and falling for, and then marrying one adventurous young girl named Ellie who had the original dream to go to Paradise Falls.  But alas, life is what happens to you while you are making other plans, and so we fast forward to a time when Ellie has passed away and Carl is indeed a grumpy old man, who is in danger of being evicted from his own house due to ‘urban renewal’ a phrase about as oxymoronic as ‘public servant’ these days.

Some pizzazz and life is injected into this sad tale by one pudgy and persistent Boy Scout named Russell (though he is dubbed a Wilderness Explorer). Russell badly needs some parental love and guidance, coming from a ‘broken home’ and Carl seems an unlikely candidate to provide it.  But adventures often make strange bedfellows, and this is one of those tales.

One of the real issues for film makers these days is how to preserve the proper tension between dazzling technology and special effects on the one hand, and generating a compelling story and plot on the other. Sometimes in films like this one the CG (which causes this film to be rated PG due to some pretty graphic depictions of snarling beasties) threatens to overwhelm, or even substitute for having a decent narrative arc. Pixar usually avoids such pitfalls, though I have to admit that the story in ‘Up’ sometimes hits dead-air pockets or seems to be powered by ordinary hot air rather than creative helium.  I would not rate this story on a par with WALL-E by any means, nor did it fog up my 3-D glasses with emotion, but it has its moments. It is enjoyable enough and better than other comedy adventures on offer this year, such as the banal ‘Paul Blart: Mall Cop’ which makes you wince, the story and dialogue are so pathetically weak ( I watched this on an endless plane ride from NY to Istanbul last week, just proving that the altitude must affect your attitude and good judgment, a message that could have been conveyed by ‘Up’).

Another pitfall Pixar has to dodge is allowing the cute or funny animals to steal too many scenes from the humans. This is not a problem in a film like Ice Age as it is basically all animals all the time.  But ‘Up’ is no such movie, and the dogs in this movie are a hoot, to say the least. I’m putting in an order now for a dog collar that makes dogs actually talk, in various interesting voices and languages.  Let’s just hope that my neighbor’s talk doesn’t come scratching at my door begging for ‘Beggin Strips’. But at the end of the day this is a story about Carl and Russell, and their surprising bonding, which creates a new and unanticipated adventure for Carl.

I will not spoil the story for you, but will say that the movie is certainly much better than most of the summer faire you are likely to be offered between now and the end of August, and it certainly is a film you can watch with your children without fear of subliminal but influential mesages that are inherently unChristian.  It is neither too long, nor too short, and it is full of creativity mostly on the CG side of the equation. This movie reminds us of the words of Tennyson about there being a tide in the affairs of humankind which if taken at the flood leads on to great things, or at least fresh adventures and good things.  And while that message may be a cautuonary tale, it can also be an uplifting one.

P.S. There is as usual an opening short feature as well explaining where storks get all those babies they keep delivering. Inquiring minds want to know.