My youngest son is readying for another adventure. One that involves rolled up clothes in duffel bags, a passport, and another continent. He can’t wait.

By now, he’s at the airport. Or on a plane, happily off into the wild blue that called his father, his grandfathers.

Given history, it will be at least a year until I see him again, probably longer. He points out we have electronic assists now — FaceTime, Skype, email & texts. I nod like the good mother I want to be; I do not howl like a banshee because he will be 24 hours away in a time zone 18 hours ahead.

My beginner’s heart knows that this is attachment, as well as a strong desire for things to be — somehow — different. And yet this grown man still my baby is who he is, and much of that is an adventurer. He has been back from his last peregrinations only months — fewer than six, to be exact. To ask for things to be different is tantamount that he be different.

My sons are good people, and good sons. They call, they talk. They share their lives in bits & pieces, better than than their father did with his mother. Certainly better than my own father did with his. I’m grateful daily for who they have grown into, these men who are still, somewhere, my blond, blue-eyed children.

Each of them has found his own way — and they are different ways, although they share many similarities. Each is a dreamer, willing to work to realise those dreams. And each is flexible, bending to the winds that shape lives. And each is far away, with one going even further.

I used to whine (and yep…I whine) that one son was on one coast & the other on the opposite. Now? That sounds great. One will be on one coast and the other on …. another continent. The heart is finding this kind of knowledge hard to accept.

And again, I remind myself that attachment to what I want is not their destinies, if one may use such an old-fashioned word. I hesitate to say that others have ‘destinies,’ although I believe in my own. Right now? It’s learning how to live in the bittersweet space of packed bags & passports, someone else’s dreams. It’s a good exercise in beginner’s heart, this revisit of how to let go of expectation and embrace even the melancholy of goodbye, knowing how long it will be before I can hug my youngest son. It’s just not easy. 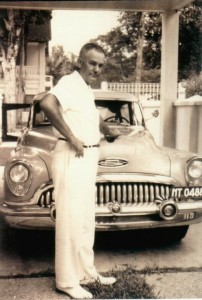 fathers, and what a grandson can remind us
archives most recent
More from Beliefnet and our partners
previous posts