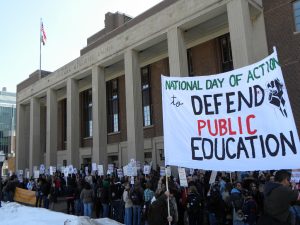 I know education intimately. I’ve worked w/ urban schools, k-university, since 1990. At the district, state, & national levels. I’ve met w/ officials from across the globe (literally: Africa, Europe, Australia…). I have educator friends & colleagues around the country. So keep that in mind. The pro-DeVos argument  is loaded w/ biased rhetoric. Let’s begin w/ this, excerpted from a recent column by conservative, pro-current administration columnist Cal Thomas. Here’s a quote:

Speaking about the unfairness of allowing children to fester in underperforming, even failing public schools, and the disparity between wealthier families who are able to choose better schools for their children, and the poor whose kids are often trapped in bad and unsafe schools, DeVos said, “We recognized that other parents were not able to make similar decisions about their children’s education, based on their income or the zip code in which they lived.” She called that a “national injustice.”

Talk about loaded verbiage… Students ‘fester’ in underperforming schools for a number of reasons, almost none of them addressed by charter schools. Charter schools do NOT make a difference. In fact, research shows they actually UNDERPERFORM public (overall – certainly there are wonderful charters that outperform publics, but overall? Nope.), and that’s with the ability to choose their students. I can find you numerous sources on this; teachers are well aware of this fact. Not opinion: data.

For instance: if you read through the Wikipedia article on charters, all the way through, you find that the initially rosy info darkens considerably. There are, as those of who have worked closely with charters know, HUGE variations in accountability. Many charters are strictly for-profit, and won’t take the kids who knock test scores down. And DeVos thinks that’s okay. In fact? She seemed totally ignorant of how the American Disability Act works for education, and unwilling to discuss it. Not good, if your kid has mental or physical challenges. As a parent? That alone would be enough for me to discount her.

That’s another of my problems w/ this op-ed piece: nowhere does it address this administration’s ‘put the foxes in charge’ mentality. Let’s say you work at a highly skilled job. Are you okay with someone who has no background in your field – say, me: well-educated in my own field, and pretty smart – coming in & bossing you, a career person?? I wouldn’t be. Yet that’s what the people recently appointed by this administration are: often totally non-versed in the area to which they’ve been appointed.

Not to mention their personal prejudices that I have so many problems with. Whether you agree that the current administration is racist or not, Jeff Sessions is a long-standing racist, and voted AGAINST domestic abuse funding for women. Not a priority for him, but women DIE w/out the funding to go to counseling and/or shelters. (Major cause of death in young pregnant women? Death at the hands of the father of the foetus.)

Here’s a big deal no one discusses: MANY children (rural & urban, brown & white) come to pre-school totally ill-prepared. Charter schools don’t care – for the most part – and public schools don’t have funding. Another problem is that many charter schools push a religious agenda, true of the majority of schools DeVos funded in Michigan. Not cool. Separation of church & state is a CONSTITIONAL imperative. No one is okay w/ funding a Muslim school, let me assure you. It’s the same thing.

The next bit of the op-ed piece by Thomas is highly problematic, as well. More incendiary rhetoric: it’s not that progressives don’t want to alienate teacher unions. Teachers KNOW the downsides of charter schools; it’s why they have a 1.3 times leave rate, compared to admittedly problematic public schools. Charters also pay like CRAP, and often don’t even have certified teachers teaching. Some teachers don’t have degrees in ANYTHING. Now, let me tell you: you learn a LOT in a teaching degree about how kids learn, and how to help them do so. It’s not like a scientist can “just teach” science.

One of the WORST teachers of science my younger son ever had was a PhD physicist, who knew squat about kids. With this kind of logic, people ought to examine carefully who the Repubs are propitiating, donors? Charter schools ALSO give a lot of $$ — to Repubs. The Koch Bros, for instance, have HEAVILY funded the ALEC initiative to squelch public schools in favour of charters. And yes, many politicians send their kids to private schools. Many don’t, just like other folks. I see no conflict there.

I also detest the rhetoric that implies ‘no personal responsibility’ by the previous administration. This is more editorial hype. Schools aren’t in the position to teach what families should. Homework, in fact, DOES teach personal responsibility. But if you have ever worked in a very poor district or school (I’ve done both), you’d know it’s just not that simple. Underfunded districts & individual schools lack critical computer equipment, which widens a gap already noticeable between the haves & have-nots. In addition, single parents have a lot on their minds. Grandparents are raising kids, too. On Social Security:

That’s a lot of folks. There isn’t public transport in a lot of places. And there is so much more to education than just assigning homework. There’s technology, as noted. There’s learning disabilities. There’s epigenetics. There’s hunger, & racism, & a LOT OF STUFF. It’s just not as simple as “people aren’t responsible.” Do you really believe that anyone wakes up in the morning, saying: how can I screw things up today? Below, Thomas’s (& the right’s) propaganda:

Many on the left believe school choice should not be available to poor children, not because school choice is a bad idea, but because the Democratic Party doesn’t want to alienate teachers’ unions that oppose it. Teachers’ unions make generous contributions to Democratic politicians and Democratic politicians rely on teachers’ unions for votes. Yet these same politicians have no skin in the game; many send their children to elite private schools. Much of what Donald Trump proposes has been tried before, but not since the Reagan administration has…personal responsibility been promoted. But personal responsibility and self-reliance are not taught in today’s public schools, which is why too many young people are deficient in these areas.

More seriously skewed rhetoric, meant to blame, not reform. While the right seems to disagree, there are MANY people with convictions in public office. I do not feel that way about Jeff Sessions the long-standing racist, or DeVos, who – as it notes – gave PRIVATE SCHOOL scholarships, then ‘bankrolled a voucher initiative.’ There are so many excellent reasons DeVos is a trainwreck. She has no liking for public schools, and charters aren’t going to to set up in rural America. Not enough money. In the meantime? Charters draw funds from already-depleted public school coffers, w/ LESS accountability (I KNOW this; don’t believe the hype that says they’re the same. They AREN’T.) Oklahoma’s public school funding, for instance, has decreased by more than 25% since 2008, the highest decrease in the NATION. Yet we’ve found $$ for charter schools. It’s criminal.

And it has NOTHING to do w/ unions, or lack of moral convictions. It has to do w/how kids learn, and parental poverty, and lack of equity. NONE of which the Republicans in Oklahoma (and not, apparently, anywhere else, either) want to address. The appointment of DeVos serves to indicate that this administration has far more in common w/ Oklahoma’s benighted, anti-education governor than w/ hope.

I’ve traveled all over the world, and I have contact with teachers & university professionals around the country. The American public education system is, despite its many flaws, still the envy of most of the world. Is it perfect? NO. But it’s significantly better than what DeVos & her alt-right cronies want to place in its stead. There are certainly good charter schools. But there are FAR MORE good public schools, despite the more numerous obstacles in their way. Perhaps, if we gave the money currently given to charter schools to addressing the problems facing schools in high poverty, or rural, or ELL, or other districts…? We could have great education for ALL American children. Not only the ones the charters will accept. (Which apparently, according to DeVos, does NOT include the disabled.) Just a thought.