that was then, or, through a glass dimly

I’m not much of one to look backwards. The good news? That means I don’t second-guess myself a lot, thankfully. But it also means I don’t have any childhood friends, really — a lot of family, but no school friends. Only one high school friend — the art editor of the high school journal I was editor of. That’s it: no high school reunions, no college reunions. The man who’s been my brother-of-the-heart these many decades, and his wonderful wife are about all the folks I retain from my well-spent youth.

So the stories of who I was ‘then’ don’t surface much, other than in family circles. And as the eldest of the 4 daughters, there really isn’t anyone who was part of my social circle — too big an age gap. When my sisters chastise my forgetfulness (legion!), I don’t mind. No one’s around to remind me, as all of them have childhood friends to do. There’s no one to exchange stories with, and that’s just fine.

A friend — the art editor I mentioned — just posted a picture of the city where I went to high school. Long ago & very far away, in an institutional building by a khlong — a canal with boats poled by Thai gondolier, or powered by rackety small engines. I spent two years at that school, and the villa pictured was one off a soi (street) I knew well. It’s a city I traversed by foot, by taxi, by bus, and by samlor, the motorised bike cabs that have no equal for price & adventure.

I haven’t been back in more than 30 years, a long time in the life of an Asian Tiger state. Streets are beyond jammed, and the quiet pace of life beside the khlong is far more hectic, I hear. Yet another reason I don’t live in the past much — it’s an imaginary place, really. Nothing remains static. Even death brings (terminal) change.

And this, you may be wondering, has to do w/ beginner’s heart just how?

It has to do with who we are — the sum total of so many things. But also — more perhaps than we realise — with places, with the where of then. My spiritual tradition, the foods I love, my affinity for languages & language in general? These are the result of my peripatetic childhood: 10 moves in 12 years, all before I was 18. And more after. This city bisected by its river is as much home for me as my grandmother’s & great-aunt’s little house where I slept on the sofa.

It’s not that I’m uninterested in who I was, per se. Rather, I’m less interested in the people I no longer know. There is little time for who I was then, when who I am now — and who I am becoming — is so immediate. If the heart is a map, then where we were is much of who we are. So…as others connect w/ the people of their past? I’m reading the history of two countries that were really never mine. I’m looking at pictures of other homes in other places & times. And I’m perfectly okay with that. Except… It makes me homesick. 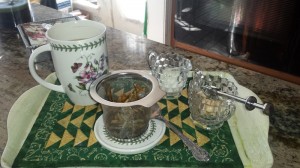