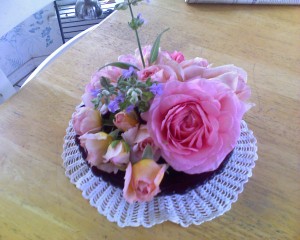 There is nothing special, really, about these flowers. I grew them in the side garden — roses & sage. Easy, really. They come up every year, like clockwork. Perennials do that.

But I never take them for granted. Each spring, when they reappear, it’s a small miracle to me. And each time they rebloom, through the summer and into the fall, it’s another. The everyday magic so much a part of our days that we often take it for granted.

I saw a skunk on the road at twilight half a block from my son’s new home. Crisp black & white, it looked far more beautiful than dangerous. And last night, a cicada was so drunk on summer that he flew right into me. A bit startling, but still funny.

This poem by Billy Collins — whom I confess to adoring, not a popular stance among academics, I assure you — reminds me that we need to pay attention. And that I’m hopelessly attached to my life. To tea with my nephew and his girlfriend yesterday — gluten-free ginger scones, and Devon cream and the house tea and cucumber & salmon on crackers. To roses and the fledgling finch at the feeder. To the wide circles of the neighbourhood hawks. To the way my grandson ignites in smiles after his nap.

To new music and the way the yard looks after mowing. To the thrum of frogs in the evening. 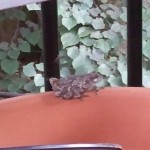 To the luxury of time and nothing scheduled.

Your life is, I promise you, equally rich. If you just take the time to fall in love again. Here’s Billy Collins to remind you how ~

This morning as I walked along the lakeshore,
I fell in love with a wren
and later in the day with a mouse
the cat had dropped under the dining room table.

In the shadows of an autumn evening,
I fell for a seamstress
still at her machine in the tailor’s window,
and later for a bowl of broth,
steam rising like smoke from a naval battle.

This is the best kind of love, I thought,
without recompense, without gifts,
or unkind words, without suspicion,
or silence on the telephone.

The love of the chestnut,
the jazz cap and one hand on the wheel.

No lust, no slam of the door—
the love of the miniature orange tree,
the clean white shirt, the hot evening shower,
the highway that cuts across Florida.

No waiting, no huffiness, or rancor—
just a twinge every now and then

for the wren who had built her nest
on a low branch overhanging the water
and for the dead mouse,
still dressed in its light brown suit.

But my heart is always propped up
in a field on its tripod,
ready for the next arrow.

After I carried the mouse by the tail
to a pile of leaves in the woods,
I found myself standing at the bathroom sink
gazing down affectionately at the soap,

so patient and soluble,
so at home in its pale green soap dish.
I could feel myself falling again
as I felt its turning in my wet hands
and caught the scent of lavender and stone.