Buddha dogs and learning about love 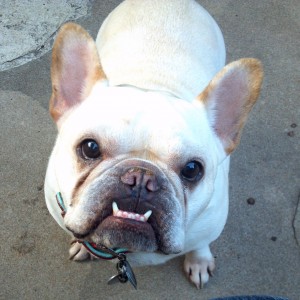 We have two dogs — both goofy-looking French bulldogs. The elder, Pascal, is sick. Turns out that despite being ‘guaranteed,’ AND xrayed, he has dysplasia. As well as a pinched nerve in his lower spine. He’s in a lot of pain.

Most folks prefer his brother, Hugo the lovebug. Hugo will take up with strangers as if they were long-lost twins. He once tried to run off w/ the plumber (really). He will fold in to your lap as if a (barely) animated canine blanket — laying completely open.

Pascal is nothing like this. He barks incessantly at even the birds in the yard. He is subject to fits of anger if your feet scare him. He refuses to jump onto the chair — he has to be picked up. But as it turns out, that’s his dysplasia. As are his non-biting attacks when he’s inadvertently pained.

And now we’re facing the question dreaded by every pet owner: how much quality of life is enough?  And how many $$ — on a fixed income — are too many?

I’ve learned so much from this lumpy galoot of a dog. That love really is unconditional, often. He’s not the smartest, or the prettiest, nor is he the best dog I know. I’ve had dogs since I was born, and he bests few of them. But he’s himself, and no one else is. That’s love, I guess.

It’s also attachment, which I’m leery of, as a Buddhist.

Not the love part, but the ‘I don’t want to lose my dog’ part. Classic dukkha. Actually, all three kinds, rolled into one hurting French bulldog. I don’t want to have to decide whether he should live or die. Whether the pain he feels will be ameliorated enough. When he will need the hip replacement(s) we know already we will not be able to afford.

And I don’t want things to change. I want it to be last week, when he was still fine, and the nerve wasn’t pinched. Because I’m conditioned to be happy in his presence. Not to suffer, as he is now.

Who knew my baby dog was such a Buddha?