It is Good Friday.  It is Holy Week. It is Passover. And other faiths, too — more individual, more isolate — also bear witness to death and redemption.

In California, a dear friend still mourns the death of his beloved. This is the anniversary of a death that came — as they often do — far too early. Like me, he has no faith in meeting his beloved again. For people like us, death has the finality of fire — ashes remain.

Today he sent me a piece an artist friend of his wrote about his love. There was the bright terrible beauty of fire about her work, the deadly precision of a surgical line. The best of art can be like that: painfully exquisite. Some of the poets who died in (or survived…) the Holocaust write with those simple, searing images.

I once had a student who was a cutter, and she tried to describe why she cut. I think it must feel like reading Radnóti  or Różewicz – so beautiful & terrible. And so very true a scarlet line that the death & loss implicit become a kind of dark loveliness. 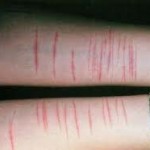 When I wonder, sometimes, about my patchwork of beliefs, about my inability to cleave to a single religious faith (Buddhism always, for me, more a philosophy than a religion…), I think of poetry, of music, of the soaring beauty of a perfect arch or a span of bridge. Made by hands, all of it. And I remember: art can save you. As surely as death, or blood on lintel, it can redeem.

Once, many years ago, words from a woman I never met reached out to me. Her stories were light into very dark corners where I was lived then. Another time, a song in a car on a highway going nowhere I had ever wanted to end up kept me on the macadam. And for my dear, grieving friend? This lonely one year later, music and the sere words of an empathetic artist friend are celebratory. Are the faith he clings to.