the world is not broken ~

When I can bring myself to trust that, I’m pretty happy. But I have to confess: it doesn’t happen very often. Most of the time, I go from what seem (in my own less-than-perfect state) to be the pieces of one shattered something after another: a sister’s incredibly poor manager. The senseless death of an old friend. State politics that make me cringe.

But here’s my new mantra: the world is not broken. And I’m not its fixer…

Because believing I can ‘fix’ things only makes me … well, bossy. Not a good trait, especially for a Buddhist. And yes, I consider myself an engaged Buddhist. But while I often take the (not perhaps wise) shortcut of using ‘engaged Buddhist’ and ‘social justice activist’ interchangeably, as no less than Thích Nhất Hạnh notes, they are not the same. Certainly the vast majority of engaged Buddhists will work towards social justice in some way, but social activists (obviously) come in all faith paths, including none at all. 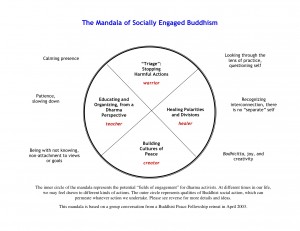 Thích Nhất Hạnh, in his teaching on engaged Buddhism, reminds us that the Buddha teaches the 1st Noble Truth — ill-being, or suffering — as a necessary path. We cannot undo suffering, Thích Nhất Hạnh tells us, if we don’t understand it well. And it’s only by suspending the urge forward, into a changed & hoped-for future, that we can actually change our own anger, fear, hopelessness.

Every time I remind myself the world is not broken — and I wish I remembered to do it more often! — I am here, in the advent of spring, in the woodpecker learning how to navigate the starling-proof feeder. I am living smack-dab in the centre of now, and the world is not at all broken.

message in a bottle: imagining a reader ~
archives most recent
More from Beliefnet and our partners
previous posts