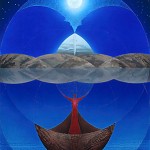 In Buddhism, it’s about the moon. At least for New Year’s. 🙂 Mahayana Buddhism — the Buddhism of Vietnam, India, China, Japan, Korea, and Tibet, among other countries — celebrates New Year’s  Day the first full moon of January. This year on January 9th.

However, Theravadin Buddhists (Thailand, Cambodia, Laos and others) celebrate New Year’s the 1st full moon of April. And different countries also factor in to the equation: in China, for example, the New Year also is lunar-based, but celebrated at yet another time, often influencing Buddhist New Year celebrations as well.

In all Buddhist traditions, it’s a time for reflection as well as festivities. Traditions are dusted off from years past, and great attention is paid to preparing for the year to come. Houses are cleaned, new clothes are chosen carefully, and foods take on significance (don’t cut your noodles: they signify longevity!).

But always, honour is paid to the neighbourhood temple, to the monks and to the Buddha. A temple visit, carrying food for the monks, may also include a renewing of the Five Precepts, and possibly three prostrations in honour of the Buddha, the Sangha, and the Dharma.

In the essentials,in other words, Buddhist New Year is much like Christian New Year — a time to resolve to better ourselves, to be kinder, gentler and more observant of what matters in the world. Not a bad thing to celebrate whenever it rolls around!