An Eclipse, an Equinox, and a Super Moon, oh my!

Friday, March 20, 2015 will mark a very powerful alignment of energies that will burn you up if you’re not careful, or propel you like a rocket if you make use of them!

Three major events are taking place, with several other events happening in the background.  First, it’s the Spring Equinox, one of two days of the year when day and night are exactly equal.  There’s a solar eclipse (!), and a Supermoon. Although they will be separated by a few hours, astronomical events aren’t like switching on and off a light switch, so we’ll be feeling the effects all at

once, in some cases leading up to it and days, or even weeks afterwards.

One quick side note: Astrology is like a weather report, it doesn’t *guarantee* anything, just like a 50% chance of rain doesn’t mean a single drop will fall, or a guarantee of warm weather doesn’t mean there won’t be a blizzard!  So don’t make too big of a deal about this, or any other astrologically based thing you read, it’s just given you a clue to the flow of energy around you.  OK? OK.  So let’s look at how all these events intertwine, and what it means to you.

“A new moon occurs when the moon passes in front of the earth and comes between the sun and earth. A solar eclipse occurs when the new moon passes directly in front of the earth blocking out the sun’s light. A super moon, or pedigree moon, occurs when the moon is at its closest point to earth in its orbit. At this time its effects on the Earth’s oceans are larger than average. This is also a new eclipse cycle. Every 19 years eclipses occur in the same place and this is the first of a new cycle of eclipses in Pisces by the south node of the moon.

To have all of these factors coincide together is unusual to say the least.” (source)

Solar eclipses function like new moons on steroids, and the fact that is happening during a Supermoon should make this an especially powerful time.  Since this is all happening in the sign of Pisces, which is about dreams, emotions, and introspection, very odd dreams and VERY high emotions should be expected.  Eclipses are also a time that our ego gets blocked, allowing our true selves to shine through, giving us a chance to sort of reboot. If you fell a bit short on those New Year’s Resolutions, this is a fantastic time to start over again.

But along with that is a chance for greater empathy and an understanding of what’s going on in the hearts and minds of our fellow human beings. Mercury, planet of communication will also be in Pisces, and this is the end of a 3-year-long cycle of Uranus and Pluto being square to each other, which is all about social justice and change.  It’s no coincidence the march on Selma happened under these conditions, and the Ferguson demonstrations happened under this one.  Take this time to look not only within yourself, but outside of yourself to see how your actions and inactions are affecting the world around you.

Next, roughly 13 hours later the Spring (Vernal) Equinox begins. As we talked about before the equinox is about a time of transition.  Where the Autumnal Equinox was about turning inwards, focusing on yourself, and planting seeds and making plans, the Vernal Equinox is about moving forward and expanding.  Just like the Earth is starting to wake up from its winter nap in an explosion of new life, this is the time for you to start pushing into new and uncharted territories.  That book you’ve been meaning to write? Start it.  That class you want to take? Enroll. Now is the time to start emerging from your cave!

So in conclusion, take this time to look inside yourself for clarity.  Answers on where you’ve gone wrong, what you should be doing, and what really matters to you; and above all else: Be HONEST with yourself.

Take what you find there, and put it into action; ride the wave of the planet’s forward push to start making progress of your own. And as always, do SOMETHING every single day to get you closer to where you’re trying to go.

This is going to be one of the most powerful times of introspection possible, and it’s either going to be a time of breakdowns or breakthroughs, so don’t take it personally if people are overly emotional or just aren’t themselves.  Keep your head up, go with the flow, and keep moving forward! 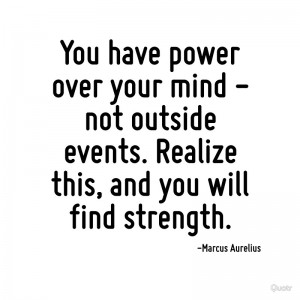 Are you growing, or just growing older?
archives most recent
More from Beliefnet and our partners
previous posts