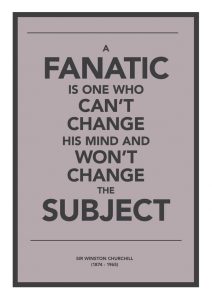 First, a confession: Although I pride myself on my ability to dialog and find a common ground with anyone, I’ve had real trouble with this lately.  So let me be clear that this article isn’t some sort of decree from Olympus, so much an insight into the very things I’m grappling with these days.

I recently discovered the excellent work Hunter Maats is doing over at MixedMentalArts, and have felt compelled to get involved.  And although his recent conversations have been aimed at intolerance in the Atheist community, this conversation can just as easily applied to any ideological gulf.

Let me say upfront: Any person who insists on being absolutely and unquestionably right is operating from a place of ego, and not from a place of reality.  There are very few things that are true for all people in all times, and all places, and in all circumstances, and anyone who says differently is either selling something, or dangerously deluded.  As Freud said, “neurosis is the inability to tolerate ambiguity.”

The second article I ever wrote was about how Atheists and Creationists are nearly identical in their ideologies (still one of my most controversial articles). I’ve also written about the difference between Science and Scientism.  To make sure we’re beginning with a common understanding, here are a couple of definitions:

The American Heritage Dictionary defines Science as:
1.The observation, identification, description, experimental investigation, and theoretical explanation of phenomena.
2. Such activities restricted to a class of natural phenomena.
3.Such activities applied to an object of inquiry or study.

It also defines Scientism as:
1.The collection of attitudes and practices considered typical of scientists.

2.The belief that the investigative methods of the physical sciences are applicable or justifiable in all fields of inquiry.

By definition, science is an investigative method that in no means opposes a spiritual life. Believing that a person must have a rational world view OR a spiritual one is not just misguided, it’s actually dangerous.  Consider that decades of science based attempts at refuting religion have triggered a backfire effect that caused some people to double down on their religious views to the point of rejecting objectively perceivable facts.  It’s no coincidence that the Religious Right are the ones denying Climate Change, they’ve been trained to believe reason is contrary to their world view.  None of this happened in a vacuum.

To my science minded brothers and sisters:
I freely admit that there is no empirical proof that God exists, or that there is any reality beyond this physical world of gravitation and solid mass. Never forget that there’s a major difference between what we fervently believe, and what we KNOW for certain.  But there is a giant, and often unquestioned assumption at the core of most (not all) Atheist’s world view, and that is that empiricism is the ONLY measurement of truth.

We all operate with faith in the unproven and unprovable.  Do you love your family, or significant others? Prove it. You might say ‘I say it,’ but anyone who’s dated a sociopath can tell you that doesn’t mean anything.  You can say ‘I feed, clothe, and take care of them,’ but the military and prison systems feed and clothe people, and it has nothing to do with love.  ‘I am loyal to them,’ but that might be the path of least resistance; ‘she happy == me happy.’  Even if you were to measure a certain hormonal release in your brain when exposed to them, that’s a chemical reaction, not ‘love.’

And that’s not even asking you to prove that they love you back.

Love, hope, optimism, justice, fairness, and any hypothesis that had yet to be tested all began as articles of faith, not empiricism.

Also, here’s a question: Let’s assume that Jesus Christ literally turned water to wine, and literally walked on water. Let’s say Lazarus literally rose from the dead. I’m not trying to convince you, but let’s assume it all happened as written…how exactly would we prove that now?  What exactly would proof look like?

And if your hang up is it didn’t happen because it couldn’t happen, that means you’ve closed off your mind to the common beliefs of billions of people because it doesn’t fit your preconceived notions…how does that make you better than anyone else?

To my religious minded brothers and sisters:
“I do not feel obliged to believe that the same God who has endowed us with senses, reason, and intellect has intended us to forgo their use and by some other means to give us knowledge which we can attain by them.”  -Galileo Galilei.

Arguing about obvious and easily proven things makes us look foolish. Climate Change is real, no one is lying to you about climate data. We all get to have our own opinions, but we don’t get our own facts. Just like it is wrong to have our Atheist friends try to force empiricism on the spiritual, it is equally wrong to try and force spirituality on the empirical.

So now, a question for you: Do you believe the Angel Gabriel literally appeared to Muhammad to dictate the Koran? Did he literally ride a horse up to heaven at the end of his life?  Was Hercules a real person who strangled two snakes in his crib that were sent to kill him as a baby?  Was there a real Nemean Lion that he choked to death?  Was Buddha literally approached by Brahma after he achieved enlightenment? Tempted by Mara the Evil One?

If you casually dismiss these stories as fiction, even though some people believe them as literally true, then now you know how your beliefs sound to people who don’t share them.  Saying Jesus will literally come back one day sounds exactly the same as King Arthur promising to return from Avalon one day.

And you can’t prove it’s any different, because there’s no proof to give. Just like many of our Atheist brothers and sisters have decided truth can only be found in a laboratory, many of us have chosen to belief only our holy book contains the truth, while the rest are fairy tales.  And it’s an equally baseless assumption, and usually one we’re born into.  Just ask yourself, if you’d been born on the other side of the planet to a vastly different family, what would you believe right now?  If you’d been born in Outer Mongolia, or Communist China, Tehran, or 3,000 years ago in Greece what would you believe?

Just like they’ve forced many of ‘believers’ to resist what is true, trying to convince an adult that a talking snake forced a woman to eat a cursed apple does nothing but make it easier to ignore and laugh at you.

So, what do we do?
“Belief is a wise wager. Granted that faith cannot be proved, what harm will come to you if you gamble on its truth and it proves false? If you gain, you gain all; if you lose, you lose nothing. Wager, then, without hesitation, that He exists.” -Blaise Pascal

I don’t KNOW what happens after we die, no one does.  Maybe nothing, maybe everything; I’m not particularly worried about it either way.  Leading a moral, compassionate, good life now is far more important. Even a fervent belief in an afterlife by no means diminishes our responsibilities in this one.

Progress will be made by building off the things we have in common, beginning with the knowledge that only our egos are afraid of dialog, or compromise.  We can (and have) argue for years about the unprovable.  But does anyone disagree that we should treat other people how we like to be treated? That kindness and concern for our fellow human beings is a good thing?  That there may be truths that exist beyond the bubble of our personal experiences?

I would also invite us all to give up being drawn into petty debates about what is and is not literally true.  Since I am going to tell you a secret: It isn’t actually important to get hung up what is and isn’t literally true.  Does knowing Romeo and Juliet didn’t literally happen in any way diminish the power of the story?  If you knew for a fact that Jesus was a flesh and blood man who was crucified and died, or even came back because he was comatose rather than dead, would it destroy your faith in his teachings?  If so, that isn’t faith, that’s your ego wanting to lay claim to the one and only truth.

And that’s the point: There is no one and only truth, and there is no way to prove it one way or the other.   You can look at the intricate majesty of the natural world and the Universe we live in, and be filled with a profound sense of spirituality, as many great scientists have described.  You can also look at the deeper meanings of the miraculous and see what these stories are trying to communicate not just about God, but about each and every one of us.

Issac Newton was one of the greatest geniuses of all time, and also a fervent believer, if he can do it, any of us can. It isn’t about recruiting, but the free exchange of ideas with the goals of improving life and creating better people.  Don’t forget, we’re all neighbors and cousins, and NONE of us are getting out of here alive. There’s as many ways of looking at things as there are people, and there’s room at the table for all of us.

The Reason for the Season; Or, Would Jesus Celebrate Christmas?
archives most recent
More from Beliefnet and our partners
previous posts