Question submitted via Formspring: “Do we all have spirit guides and guardian angels protecting over us at all times like in the paintings?”We discussed this in a recent episode of Rise UP with B. Dave Walters, along with: Whether or not ghosts are real, how to deal with things that upset you, how to stop running from love, how to stop picking jerks, how to forgive, and much, much, more!

As for this specific question: yes, we do all have a guardian angel; several, in fact.  As it is written in the Talmud, “Every blade of grass has its angel that bends over it and whispers, ‘Grow, grow.’”

In some ways, the Universe can be compared to a big machine, with each piece performing an individual and specific function.  However, thinking of it as a giant living thing is a probably better analogy.  Just like the cells of your body make up different organs, which make up different systems, they are all ultimately ‘you’.   So, pending your own personal beliefs, either God built that machine, and watches over it, or IS that entity, which we are all a part of.

Angels, then, are a part of that system; some of them watch over us as individuals, or as a nation, as a species, or as a planet.  Some really are responsible for making grass grow, or even making sure it dies in order to nourish the next generation of grass.  Usually the entities that do what seems like unpleasant tasks, like causing floods or forest fires are regarded as ‘negative’ or ‘demonic’, but that’s a rather narrow point of view.  For instance, forest fires seem like a terrible thing, and early on in the National Parks program, they worked tirelessly to prevent them from ever breaking up.  However, they soon discovered that there are some species of plants whose seeds only germinate when exposed to high temperatures, and several other natural processes depend on those fires; preventing them was in many ways killing the forest.  And so it is with us; from our narrow human point of view, some things that seem unpleasant are just as vital to life as a whole.

A very important thing to remember, however, is that while we may have angels to work as protectors and sometimes guides to us, we should not pray to them.   Revelation 22:9 says:
‘But he said to me, “Do not do it! I am a fellow servant with you and with your brothers the prophets and of all who keep the words of this book. Worship God!”  The English word angel is derived from the Greek angelos, the Hebrew and Greek words originally meant messenger.  As such, they convey important messages to us, and can occasionally point us in the right direction, but they can’t grant wishes or make decisions for us.

We may ask for help, but in the end we each have to walk the path for ourselves.

You are great, and I love you! And if you love me back, click ‘share’ up at the top! 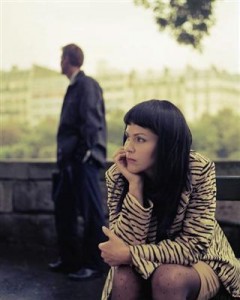 Q&A: ‘He says he wants space; should I move on?’
archives most recent
More from Beliefnet and our partners
previous posts