Jesus is not a jerk; Or, the man, the myth, the legend

Imagine there was a great teacher.
A brilliant man who’s words move, touch, and inspire many who hear him.
A revolutionary who wasn’t afraid to confront the evils of his time, or stand up to worldly authorities, even if it cost him his life…which it did.

Now, imagine that after this man’s death, another man, who never even knew our Teacher, claims to have the ultimate insight into him and his teachings, and begins spreading this new word to new people.
And so, there is a split: between a traditional, almost political view; and a new evangelical religious view.
Now, the Teacher’s followers scatter to the wind.
They form their own communities, spreading stories about him by word of mouth for 50 to 100+ years, before anyone writes them down. And once they are written down, any new copies have to be copied by hand with no editing or oversight; any mistakes or willing changes are a part of the book from now on.

Then.
Imagine the oldest copies we have of any of these books, be they the political leaning or religious leaning versions of the Teacher, are from at least 175 years after his death. To give you a point of reference, this would be like the oldest existing copies of the Declaration of Independence being from 1950!

Finally,
Add 2,000 years of conflicts, revisions, reinterpretations, editing, murder and even wars meant to establish the ‘one true’ way of interpreting the Teacher’s words, that over time have crystallized into a near infinite number of competing ‘one true’ ways of understanding the man and his message.

That’s where we find ourselves when trying to understand the life and message of Jesus (the) Christ.

Our goal here, then, is not to try and establish yet another ‘one true’ way of viewing this man and his message, since history would indicate such a thing just isn’t possible.
Instead, our goal is to try and shine some light on some of his core teachings, for the good of all people everywhere, and not a narrow group of people who lay claim to him and his name; especially those who would try and use that teaching to justify discrimination, hatred, and intolerance.

31 ”What do members of this generation remind me of?
What are they like?
32 “They are like children sitting in the marketplace, calling out to one another:
‘We played the flute for you, but you wouldn’t dance;
we sang a dirge for you, but you wouldn’t weep.’
33 “Just remember, John the Baptist appeared on the scene, eating no bread and drinking no wine, and you say , ‘He is demented.’.
34 The son of Adam appeared on the scene, both eating and drinking, and you say, ‘There is a glutton and a drunk, a crony of toll collectors and sinners!’
35 Indeed, wisdom is vindicated by all her children.”
Luke 7:31-35; (all verses from the ‘Scholars Version’ translation)

So, what do you take from this?
That John the Baptist was stern and direct; like he was singing dirges (sad songs) but no one wept (listened to him). Jesus, on the other hand, is like someone playing a flute asking people to dance, but they don’t listen to him either.
He is saying that one of the primary criticisms against him is that he drinks wine and hangs out with ‘sinners’…basically it sounds like he knows how to have a good time!
The same story is repeated in Matthew 11:16-19, so it stands to reason these things really happened; a fun loving Jesus is a big change from the version we hear about so often!

5 A sower went out to sow his seed; and while he was sowing, some seed fell along the path, and was trampled under foot, and the birds of the sky ate it up. 6 Other seed fell on the rock; when it grew, it withered because it lacked moisture. 7 Still other seed fell among thorns; the thorns grew with it and choked it. 8 Other seed fell on fertile earth; and when it matured, it produced fruit a hundredfold.
During his discourse, he would call out, “Anyone here with two good ears had better listen!”
Luke 8:5-8; compare with Mark 4:3-8 and Matthew 13:3-8.

Before we go on, what do you think this story means?
What do you think ‘anyone with two good ears better listen’ means?
In Matthew, Mark, and Luke (but not John), Jesus is shown teaching primarily through parables. Stories whos meaning became clear after intense thought and meditation.

9 His disciples asked him what this parable was all about. He replied, “you have been given the privilege of knowing the secrets of God’s imperial rule; but the rest get only parables so that
THEY MAY LOOK BUT NOT SEE,
LISTEN BUT NOT UNDERSTAND. (Capitalized because it’s important.)
11 “Now this is the interpretation of the parable. The ‘seed’ is God’s message. 12 Those ‘along the path’ are those who have listened to it, but then the devil comes and steals the message from their hearts, so they won’t trust and be saved. 13 Those ‘on the rock’ are those who, when they listen to the message, receive it happily. But they ‘have no root’” they trust for the moment but fall away when they are tested. What ‘fell into the thorns’ represents those who listen, but as they continue on, they are ‘choked’ by the worries and wealth and pleasures of life, and they do not come to maturity. 15 But the seed ‘in good earth’ stands for those who listen to the message and hold on to it with a good and fertile heart, and ‘produce fruit’ through perseverance.”
Luke 8:9-15; compare with Mark 4:13-20, Matthew 13:18-23

So…is that what you thought the story meant?

This ‘parable of the sower’ is important for many reasons:
one, it highlights that Jesus himself consciously taught in a way that would go over the heads of lazy people. Anyone who wanted to be spoon fed the truth had come to the wrong teacher! Even in his lifetime, his teachings were meant to be challenging and inspire thought, rather than blind literal acceptance.
Then there is the fact that there is a variety of ways in a person can ‘get the message’ that may or may not last, and that people can lose their way for a variety of reasons; this is a powerful call for all of us to constantly examine and reexamine ourselves to see ‘where our seed is growing’.
And finally, as pivotal a story as this is, it doesn’t appear at all in the Gospel of John; one of many examples of the widely diverging nature of the Gospels themselves.

27 “But to you who listen, I say, love your enemies, do favors for those who hate you, 28 bless those who curse you, pray for your abusers.
35b Your reward will be great, and you’ll be children of the Most High.
As you know, the Most High is generous to the ungrateful and the wicked.

After all, even sinners do as much.

34 If you lend to those from whom you hope to gain, what merit is there in that?
Even sinners lend to sinners, in order to get as much in return. 35(a) But love your enemies, and do good, and lend, expecting nothing in return.
36 Be compassionate in the way your Father is compassionate.”
Luke 6:27-28, 32-36; compare with Matthew 5:43-48

Again, the core of the Teacher’s message is love, unconditional love.
To do for others who can’t do for themselves, and who maybe even don’t deserve it; because it is *the right thing to do *.

Imagine what this world would be like, if the last 2,000 years had been spent spreading the Gospel of Love rather than the strict word of the gospels?

Imagine what this would could be like if we started focusing on love and service now, rather than petty, unprovable, and ultimately irrelevant theological debates?

Maybe that is the real Kingdom of Heaven on earth so many people claim to be waiting for; wouldn’t that be a sight! 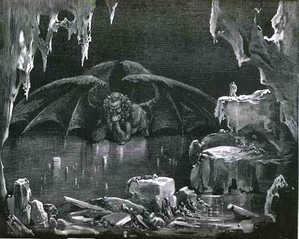 God is not a jerk; Or, to hell with you (?)
archives most recent
More from Beliefnet and our partners
previous posts