If you are a fellow Christian, was raised Christian, or know any Christians, you may have heard something that sounds a bit like this:
“If you don’t believe that Jesus Christ was the one and only Son of God, and accept him as your personal Lord and Savior, than you’ll go to hell and suffer for all eternity”.
Or, you may have been told all sorts of things can land you in the Lake of Fire, including (but not limited to): being gay, masturbation or pornography, and countless other things.
I’ve even heard of women being told that certain hair styles would get them sent to hell!

It goes without saying, that many other, if not most all religions have some idea of ‘hell’, but Christianity and Islam tend to make the biggest deal about it. Something even more incomprehensible, is how some Christians and Muslims even seem to be *happy * about the idea that some other human beings will suffer for all eternity.

Before we proceed, here’s a simple question:
If you have children, or even pets, and they make a mistake, even a big mistake, like burn your entire house down, you’d be mad at them, right?
You’d probably punish them, maybe harshly; but would you want them to suffer for the rest of their lives for their mistake?
Would you put a toddler in prison for life for what they’d done wrong?
Put a pin in that, we’ll come back to it later.

So let us look at this idea: is there a hell at all, and what does it take to be sent there?
Looking at this from a Christian perspective, there are numerous mentions of hell throughout the Bible; sometimes as a place as eternal torment, and sometimes simply as a non-specific afterlife. In fact, Judaism doesn’t have much of an emphasis on hell; and purgatory doesn’t seem to have any sort of Biblical basis at all.

The standard belief goes something like this:
1. God is God, so God gets to make the rules.
2. The rules are connected to reward for the obedient, and punishment for the disobedient.
3.It’s obvious that in life not everyone gets what they deserve,
4.Therefore there must be another world where they do.
5.If there is no reward or punishment in the future, then God’s law must not be fair.
6.The Bible talks about reward and punishment in the future.
7.We can’t know anything about what’s going to happen, except what the Bible says.
So far, so good; it’s the next few ideas where things become problematic:
8.Since God can’t be around anything ‘unholy’, then there must be a place where everything unholy ends up.
9.It’s good for the ‘holy’ people, so they don’t have to spend eternity with unholy people, like being in prison with a bunch of criminals
10.It’s good for the unholy, even, since it means they can’t spend all eternity in rebellion against God.

We’ve talked before about what God is like, and what God wants you to know, so no need to recap that here. For our purposes, we will assume God is:
All knowing
All Powerful
All Present
All Loving
These are characteristics that most people who believe in a ‘God’ as such all probably agree on.

Remember when I asked you about the eternal punishment for children?
I assume if you’re like most people, you probably said ‘no’, children shouldn’t suffer for their entire lives for mistakes.

Now, if we are accepting that God is all knowing, AND all loving, then how can we be punished for all eternity for our own ‘childish’ mistakes?
We have spoken of the ‘problem of evil’ before, but if God knows in advance what is going to happen in our lives, that we’ll have our 50, 70, or 100 years on Earth and then endless eternity to suffer, then in many ways we were created TO suffer.
And that doesn’t sound very loving, does it?

Consider, our Divine Father (and/or Mother) would know everything about us, what we meant to do, what forces were at work, what conditions were in place when we made every single decision we made. Truly, S/He would be in a position of infinite compassion, just like a mortal parent.

Unless you believe that a Human Being, fallible and flawed, is capable of greater forgiveness than the Creator of all things?

So, this means there is no hell, right?
Not quite.

Again, the Bible and other scriptures of the world are quite clear on negative consequences for a negative life, so by extension there must be some truth to it.

The difference is: it *cannot * be a permanent state, for the reasons given: infinite punishment for finite sins. Logically, assuming ANYTHING happens after we die, and characteristics we gave God above are true, then being sent to hell must be like being sent to prison; a temporary state rather than eternal one. It must be that after some point, we’d be able to get out, be it to come back to the Earth for another life, or to move on to be with God in heaven.

Anything less than this, would make God not only a jerk but a tyrant.

The counter argument is always posed, “but the Bible gives instructions how to avoid this; if we choose not to, we bring this punishment on ourselves”.

That fails to take history into account; events don’t happen in a vacuum.
For instance, the millions Native Americans that were slaughtered in North and South America, probably weren’t too keen on Christianity. Would our all-loving God say to them “I understand that you saw these people rape, pillage, and kill everyone you ever loved; but they were Christians and you weren’t, so you go to hell and they don’t”.

This seems unlikely at best.

What seems FAR more likely, is in the earliest days of the Church, right up to the present, there were people who’s primary concern was not in ‘saving souls’, but in controlling people.

And what better way to control a flock, then by threatening eternal torment for disobedience?

It’s no coincidence that the collection plate tends to come around right after the hellfire and damnation speeches.

Do you really believe that God is so easily fooled that someone who said a few words and got their head dunked under water gets an eternity of relaxation, where people who dedicate their lives to service in the name of some other Faith get eternal torment?

There is one, and only one way to guarantee a positive outcome in the next life, and that is to make the most of this one.
Love God, love yourself, and love one another, and when you meet your judgment you won’t have anything to worry about. 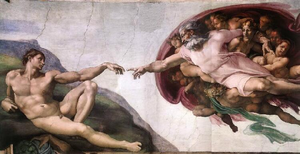