“It is often necessary to know how to obey a woman in order sometimes to have the right to command her.”
Victor Hugo

Even though my emphasis is on ‘Spirituality’, the fact of the matter is the easiest way to see God is through feeling the love of that special someone.

One of the number one issues I deal with in my Coaching work, is in relationships. Bridging that gap between Mars and Venus to help men and women understand each other.

Now you may recall that I’ve already talked about how to find Mr/s. Right, so now I want to talk a little more specifically about men and women separately, and how we tick.

So in this article I’d like to give a little more insight into women, and what it’s like inside their heads and hearts.

If there is one thing that I can impress upon you, is where men are very, very, very, VERY simple creatures: women are *not *!
An average woman has likes, dislikes, opinions and even passions that vary WILDLY from week to week, day to day, even moment to moment.
But every woman, or at least 99.9% of women, wants to know they are safe and provided for (even if she is providing for her self).
A woman needs security and stability like a man needs approval.
I would submit that even dare devil risk-taking women still have areas in their lives when this applies.

Her drive (for the most part) is to create and nurture. And above all else: to connect and mate with the ABSOLUTE BEST MATE that she can find. If a man’s biological imperative is quantity, then a woman’s is quality.
And I can prove it: look at the average quality of male strippers and prostitutes in the world, and the average quality of female strippers and prostitutes in the world…I rest my case!

Consider that a man’s sexual peak hits in his late teens, just in time for him to procreate before he does something stupid and probably gets himself killed!
Whereas a woman’s sexual peak occurs in her mid to late 30’s, just in time to produce another offspring in her peak years.
Also look at a woman’s much higher bodily production of Oxytocin, the ‘love hormone’. This hormone triggers a pleasurable sensation in a woman’s brain when she is stroked and cuddled, or strokes and cuddles a child (or anything small and soft) in a way that men just don’t experience.

Now, let me state AGAIN: this is not a value judgment. This is not to say that every woman has to have a home or children, or that she can’t enjoy sex with many different partners. I am simply pointing out the base-line biological drives we both have.

Another thing:
For the most part, you can’t bully, complain, or guilt a woman into doing what you want for a long period of time.
Why would you want to be with someone you have to dominate into submission? More importantly, if you care about this person, why would you even want to?

If you want to motivate a woman to do something, you always catch more flies with honey. What that that means is you’ll gain much better results through listening and positive reinforcement then you will through bullying, which I explain in detail in the video below.

Now for something I have not discussed anywhere before now:
I’d like to dispel some common myths about women.
1.Women are illogical and / or dumb
As I said before, you get into murky water anytime you say ALL ____ are ____ since if there is even one example to the contrary, your point has fallen apart! And while there are some highly logical women out there, for the most part the feminine mind is right-brained and non-logical.
NOTE
I did not say ILLOGICAL, I said non-logical.
Where the average man see things in a linear way, A + B = C, a woman has a keener eye for nuance, for the details and meaning that lay in between, behind, and underneath the obvious.
And as for women being ‘dumb’, look up Marilyn vos Savant; she has an IQ of 186 is on the very short list of smartest people in the world.

2. Any woman who speaks her mind is PMSing, or a bitch.
Fellas, listen.
Never, never, never, never, NEVER assume a woman is on her cycle if she seems like she is in a bad mood. In fact, even if you KNOW she is (from past experience), don’t assume that is *why * she is upset about something.
The fact is, emotions are non-logical (even in men), and are valid in and of themselves.
If she says she feels a certain way, BELIEVE IT.
Don’t try and rationalize, justify, or argue with her about it, just accept it’s how she feels and respond accordingly. This is actually covered in detail in the video below.

3. Women can not be trusted.
You know, I am sorry if you have been burned in the past, or if whomever taught you this got burned in the past. But the fact of the matter is, SOME women *can’t * be trusted. Just like some men can’t be trusted, either. The fact of the matter is the only way to know who is and is not worthy of your trust is to give it to them and see what they do with it. Move as slowly as you need to in order to feel comfortable, and give more as they continue to earn more of it.
But blanket statements about any sex / race / nationality being more or less trustworthy is a sure fire recipe for a life of paranoia, failed relationships, and loneliness!

4.Women don’t like sex as much as men do.
Maybe you’re doing it wrong!
Seriously, we already discussed that a man has a *stronger * drive for multiple partners, but that doesn’t mean that women like it any less than we do. I think this myth lay in the fact that many men can’t comprehend the idea that a woman’s number one sex organ is between her ears.

Make her feel loved, make her feel beautiful, make her feel special. Make her feel pampered, cared for, and sexy.
Take the time to learn how to become a better and more attentive lover and I think you’ll find she wants it as bad or worse than you do!

When in doubt, a little red wine, soft music, and a nice back rub and chances are high you’re off to the races.

5.All women want to settle down, get married, and have babies.
Wait, didn’t I basically say that earlier in the article?
NOOOO I didn’t. I said she has a stronger drive to settle down, just like men have a stronger drive *not * to settle down. But this by no means guarantees every woman wants that, not by a long shot. She has her own hopes, dreams, and aspirations, and a husband and / or children may not fit into that picture.
But I WILL say that around 30ish she’ll start thinking REAL hard about it, though!

But, please, let me leave you with something:
I have seen more relationships killed by one person’s insecurity then anything else. Yes, you have to find a way to communicate; if you can’t communicate, you don’t have a relationship.
But you have to take the time to face your fears and decide what is and is not worth saying. Remember, the measure of communication is in the response it gets; if you know something you are going to say is going to upset her, and not gain you anything, then don’t say it!

Remember, she is a complex creature. What she wants may change, and she may not be able to explain ‘why’ she feels how she feels. She has thoughts, opinions, hopes, dreams and fears; she is NOT just a boob delivery system!And no, she may not want to watch the game, and no, she may not think like you do! But if you want someone who thinks just like you do…date guys. 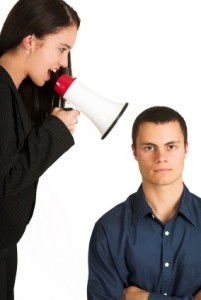 Understanding Mr. Right; Or, how to train your husband (VIDEO)
archives most recent
More from Beliefnet and our partners
previous posts