A stock image used for a news broadcast enraged viewers. 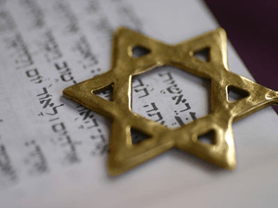 “We are truly sorry for inadvertently using an offensive image in our Yom Kippur story. We apologize and deeply regret the error,” WGN posted on its Twitter account after flashing a symbol synonymous with the Holocaust on a news broadcast.

The yellow star was pinned on Polish Jews' garments during the Holocaust to identify them during Germany’s invasion in the 1939. In 1938, the Reich Main Security Office recommended that all Jews wear identifying badges, and it became standard for those living in ghettos, and those captured.

Similar badges were used during the Middle Ages and were eventually phased out by the 19th Century, the Holocaust Center and Museum shared, until 1938.

WGN admitted it was an oversight by using the stock image on Yom Kippur—yet an outcry ensued.

“Don't they have editors, producers, directors etc. Total incompetence. No excuse for this,” posted a Huffington Post reader. Another viewer responded “That was no mistake. Someone needs to get fired.”

It is estimated that 11 million people were murdered during the Holocaust. Six million were Jews. Many were forced to live in ghettos at the beginning of the war having to give up all possessions, freedoms, and given curfews. Poland had the largest ghetto in Warsaw, with 400,000 Jews forced to live within 1.3 square miles.

“Regrettably, we failed to recognize that the image was an offensive Nazi symbol. We are extremely embarrassed and we deeply apologize to our viewers and to the Jewish community for this mistake,” the station said.