An inside look on the much anticipated film Life of Pi. 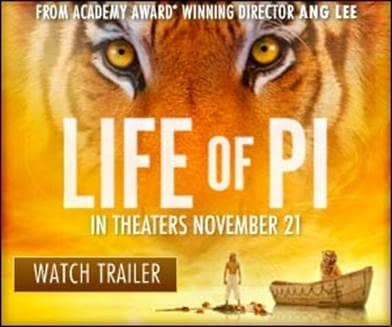 Life of Pi comes to the big screen (in 3-D) on November 21, in director Ang Lee’s forthcoming adaptation of the bestselling 2001 novel by Yann Martel.

As with any cinematic adaptation of a thoughtful and thought-provoking novel, it will be interesting to see how much of the main character’s subjective thoughts and interior “voice” will be successfully translated from the page to the screen. In the hands of a capable director such as Lee, we have every reason to be optimistic.

Much of the novel consists of a simple tale of sheer “man vs. nature” survival. Following a shipwreck that drowns the rest of his family en route from India to a new life in Canada, sixteen-year-old Piscine Molitor Patel (or “Pi” for short) is a youthful but resourceful castaway who manages to survive over seven months at sea.

Helplessly adrift aboard a lifeboat and a makeshift raft amid the vast emptiness of the Pacific Ocean, Pi must not only avoid succumbing to hunger, thirst, storms, and sharks, but all the while also somehow peacefully coexist with another surviving castaway -- a deadly 450-pound Bengal tiger, with whom Pi shares his lifeboat.

But woven throughout the narrative are some religious perspectives and spiritual themes that many readers may resonate with, while others may instead find them provocative or even challenging.

Pi himself is the very soul of inter-religious openness. Before leaving India with his family on their ill-fated sea voyage, the boy adopts an innovative routine of rotating multi-religious devotional practices; he begins worshipping regularly at a Catholic church, as well as at a Muslim mosque, in addition to his own longstanding and continuing worship at a Hindu temple.

When discovered, their teen son’s enthusiastic embrace of multiple religions simultaneously is a source of some confusion to Pi’s parents, as well as a source of significant consternation to the Catholic priest, Muslim imam, and Hindu pandit of those respective houses of worship Pi regularly frequents.

In an amusing sequence in which bemused parents and incensed clergy together confront Pi regarding his highly unorthodox commitment to a plurality of faiths, the boy responds with a simple but heartfelt observation: “Bapu Gandhi said, ‘All religions are true.’ I just want to love God.”

Other observations offered by Pi are peppered elsewhere throughout the novel, and many of them are well worth additional pondering by readers who are religiously reflective, or otherwise spiritually inclined (or intrigued).

“It had a reputation for few gods and great violence…. Something about a human sacrifice. An angry god who had to be appeased with blood…. What? Humanity sins but it’s God’s Son who pays the price?... What a downright weird story. What peculiar psychology…. I couldn’t imagine Lord Krishna consenting to be stripped naked, whipped, mocked, dragged through the streets and, to top it off, crucified – and at the hands of mere humans, to boot. I’d never heard of a Hindu god dying…. It was wrong of this Christian God to let His avatar die…. Why would God wish that upon Himself? Why not leave death to the mortals?... This Son is a god who died in three hours, with moans, gasps and laments. What kind of a god is that?... And this Son appears only once, long ago, far away? Among an obscure tribe in a backwater of West Asia…? Wait a minute…. This is Brahman ungenerous and unfair…. What could justify such divine stinginess?... I’ll stick to my Krishna, thank you very much. I find his divinity utterly compelling.”

It’s always interesting, at the very least, to look upon one’s own cherished and favored religion through the eyes of another.

As Pi elsewhere notes, “I am a Hindu. The universe makes sense to me through Hindu eyes.” No doubt Christians, Muslims, Jews, Buddhists, or adherents of any other religion could well say the same thing, regarding how their own faith perspectives help each of them likewise make sense of the universe.

At one point, Pi also proclaims, “A plague upon fundamentalists and literalists!” Perhaps it is his own non-fundamentalist, non-literalist approach that enables him to see beyond his initial objections, and to subsequently perceive something deeper, and deeply compelling, within Christianity – and, later, within Islam, too (which Pi soon comes to regard as “a beautiful religion of brotherhood and devotion”).

Such deeper and compelling elements within these other faiths he finds sufficiently valuable to warrant adopting them himself, seeing no inconsistency whatsoever in doing so. Pi finds both Islam and Christianity to be positively complementary with, rather than negatively contradictory to, his own native Hinduism. By the time Pi is sixteen, he affirms, “I was a practicing Hindu, Christian, and Muslim.”

When others insist that he cannot follow all three religions at the same time, and that he must choose only one of them to adopt, Pi youthfully retorts: “I don’t see why I can’t be all three. Mamaji has two passports. He’s Indian and French. Why can’t I be a Hindu, a Christian, and a Muslim?... If there’s only one nation in the sky, shouldn’t all passports be valid for it?”

These and other perspectives upon religion and spirituality that are woven into the novel’s narrative may or may not be everyone’s cup of tea. Some will wholeheartedly agree with its supportive embrace of such religious pluralism and diversity, while others of a different sort of theological bent may find such an inclusive attitude troubling. In either case, there is at least a good deal of conversation fodder present within this novel, and plenty of rich food for thought for those who are drawn to chew ruminatively upon matters so deep and profound.

How much of the narrative’s overt philosophizing will survive intact, in the transition from print to film, remains to be seen; novels and movies are two very different kinds of media, each with its own unique strengths and characteristic weaknesses. But we will soon discover the degree to which Ang Lee’s cinematic adaptation of Yann Martel’s thoughtful and spiritually informed novel succeeds in preserving – and in evoking – such themes on the silver screen, when Life of Pi opens in theaters on November 21.