The Episcopal bishop-elect's involvement in a support group for gay teens comes under scrutiny.

Beliefnet
One of the allegations that stalled the vote to confirm V. Gene Robinson, an openly gay priest, as Bishop of New Hampshire was that a group he helped found promoted gay pornography on its website.

Robinson helped create the Concord, New Hampshire chapter of the group, set up to help "gay, lesbian, bisexual, and transgendered youth" under age 22. He lists it as an accomplishment in his official biography, though he ended his association with the group five or six years ago, according to Mo Baxley, a board member of the Concord group.

Actually, the Concord group doesn't have its own website. The organization is part of a loose network of Outright groups throughout New England. The Concord group, like most of the other chapters, has pages on an Outright website administered by the Portland, Maine chapter, that list its meeting times and locations.

That main site's administrators did remove a link to a website that, they said, included links to pornographic material, according to Mim Eastron, Executive Director of the Seacoast Outright, another chapter of the group. "After we learned about a link on Concord Outright's website that links to an adult-oriented website, the link was taken down from Concord Outright's website," she said in a statement. "The adult site is not something that we consider appropriate for any youth."

Rev. Robert E. Stiefel, a New Hampshire priest who serves on the board of Seacoast Outreach, explained that "some time ago someone hacked into the website of Portland Outright and posted a link to a pornographic website. This link also got hacked into the Concord website. As soon as it was discovered, it was removed."

"The event, such as it was, had nothing whatsoever to do with Canon Robinson."

However, the links still listed by several of the other chapters include some that might be considered controversial. They do not promote pornography but do link to sites that some would view as inappropriate for teens. 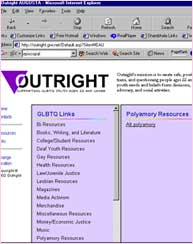 The "related organization" links category includes a link to the site for the Bisexual Married Men of America, which helps men face the "challenges" involved in being both married and bisexual. The links section also includes a "Polyamory Resources" category, which links to Polyamory.org, a listing of discussion groups for people interested in polygamous relationships. 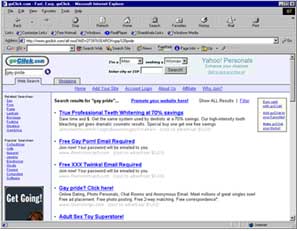 News reports indicate that the bishops first heard about the Outright allegations from David Virtue, who runs a conservative daily weblog of Anglican News at Virtuosity Online. Virtue wrote in his Aug. 4 digest, "On examination, the [Outright] site which he says is geared for 12 to 22-year olds, provides Internet links that will take these vulnerable young people directly to hard core pornography."

He continued, "Rather than leading young people to a saving knowledge of Jesus Christ, it offers adolescents a church-affirmed invitation to illegal, immoral and perverse sex."

Robinson has openly promoted his founding role in Concord Outright since he came into the public eye earlier this summer. His official biography mentions this involvement and his other work with youth. "Most of what I have learned about being a Christian I've learned from young people," he has said.

Some have accused Outright groups of encouraging and promoting homosexuality. The Bangor Outright site explains: "Bangor-Outright and the other Outright programs do not encourage homosexuality. We provide sound research-based information about sexuality so that youth may make educated choices for themselves."