Michael Vick, Forgiveness, & Top 10 Reasons to Do It

“Do you think Michael Vick should be allowed to play football again?” my husband wanted to know. (He always asked me the questions that have to do with animal rights and animal welfare since I am a card-carrying PeTA person.) I thought for a minute and said, “As much as I dislike the man and abhor what he did to those dogs, he served his time. If he’d been a business executive or a house painter, nobody would be saying that he shouldn’t get to go back to work.” 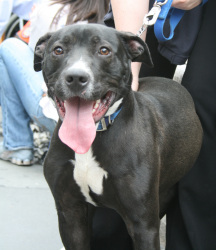 We discussed it some more, the idea that some people see playing pro football not as just a job, but a privilege, and that it makes him a role model. Do I want young people to admire cruelty? Of course not. And yet, forgiveness is powerful. And healing. In a way, it’s harder for me to forgive someone who mistreated animals than someone who mistreated people, not because I don’t care about people, but because animals, like little children, are so innocent and so trusting. I look at the face of the dog in the picture (he’s available for adoption in New York City), and I want to say, “No: don’t let that guy play! Don’t let him make scads of money! This is a travesty!” But I don’t think I get to be choosy about forgiveness. I’m just supposed to do it. Didn’t somebody say something about forgiving 490 times?
Top 10 Reasons to Practice Forgiveness
1. It frees the forgiver. Otherwise, you’re carrying around the burden of resentment. That gets heavy.
2. If you want to make a break, forgiveness cuts the connection. You can divorce the spouse who hurt you and move a thousand miles away, but without forgiveness, he or she is still with you every single day.
3. If you want this person in your life, forgiveness makes that possible. You can’t have a satisfying relationship with anyone if you’re holding onto a resentment from 1998.
4. Karma. “Forgive and you will be forgiven” (Luke 6:37).
5. People are watching. Remember when the Amish schoolgirls were murdered and the community reached out in love and compassion to the killer’s family? That taught me a thing or two about forgiveness.
6. It helps you forgive yourself. Most people who hold a lot of grudges hold the most against themselves.
7. It brings you closer to God. This comes about because you are, as the Kabbalists are fond of saying, “being like God.”
8. It’s good for your health. Blame is a negative emotion. It eats into your being and makes you feel old and tired. One study found that forgiveness reduced physical symptoms, decreased amounts of medications used, and improved sleep quality.
9. Life looks better. With forgiveness, according to the Mayo Clinic, “We’ll no longer define our lives by how we’ve been hurt.”
10. It helps our spirit blossom. Bitterness stunts spiritual growth, while forgiveness is a kind of “Spiritual Growth Hormone.” A shot of that stuff and watch out.
To keep up with Victoria:
Subscribe to her newsletter, “The Charmed Monday Minute”
Follow her on Twitter — @charmedlifelady
Watch her speaker reel on YouTube — and if your group is looking for a speaker, be in touch
Get your copy of Living a Charmed Life plus over 100 free gifts — once Labor Day gets here, all those gifts go away…