If It Works Don’t Fix It

I just figured out why today was so terrific: I didn’t venture far from myself.

That’s not to say that it isn’t thrilling at times to do something totally new and out of character. It’s just that we’re called upon to bend and stretch and change and alter ourselves so much simply to get along in life and in business, that sometimes when you get the chance, it’s heavenly to do just what makes you feel safe and comfortable and happy.

I went to church this morning. Despite having studied comparative religions in college, and reading with hunger and fascination works from various traditions of the world, I still belong to my childhood church. Well, one of my childhood churches. I was baptized Roman Catholic—and to this day I love frankincense and holy water and the rosary—but the woman who lived with us to take care of me while my parents worked would sneak me to her Unity church after Mass every week. It was there, in the verboten Sunday school, that I learned about God in a way that made me want to know Him more than anything on earth. That hasn’t changed. I joined Unity when I was nineteen, and I was there this morning, not because it’s the only good church or the best good church, but because it fit me at nine and nineteen and now.

Then I went for reflexology in Chinatown. It was one of the first alternative therapies I ever tried and during one really tough period, I think it saved me. This was 1985, I guess: my daughter was two or three, and we’d moved to Milwaukee where my husband had found a job. He worked all right, but for a man who found ways to not pay him—for nine months. We were living on what I brought in from freelance writing, which was precious little. It snowed Thanksgiving Day and we didn’t see the ground till after Easter, but I stayed well and strong and fucntioning through it all because I managed to scrape together $18 every two weeks to get a reflexology treatment.

In those days, there was only one kind of reflexology extant, the Ingham Method. Practitioners really dug in so you felt that they were getting from that point on the sole of your foot all the way to your liver and your adrenal glands. A lot that passes for reflexology these days is delicious, relaxing foot massage with yummy scented oils and soft music in the background. It’s wonderful, but I don’t think it gets to my liver. The guys in Chinatown dig in like they mean it, just the way the Jehovah’s Witness lady did back in Milwaukee. I go there, and I know something’s happened.

Then I took a class at Integral Yoga. I hadn’t been there in quite a
while, but it feels like home. Before there was power yoga, or flow
yoga, or hot yoga, there was basic, hatha yoga—the only kind we oddballs (it seemed at the time) who found the subject interesting knew about. Integral Yoga stays true to that tradition, and
although I can enjoy the other classes and learn from them, when I go
where I know all the poses and the words to the chants, I feel a
connection that I don’t get when I’m exploring something different.

So, at this moment, I feel amazing: serene, balanced, content, and at peace. That’s why I’m breaking my own rule and getting on the
computer on my Sabbath. I wanted to write this while it’s fresh and
present and I’m talking to you from the experience itself instead of the
memory.

One of my mentors often told me, “You’ve got to find places to recognize yourself.” That was some of the truest guidence I ever received. When any of us gets delicious reinforcement for who we are in this life, it carries over. We’re better then at the bending and stretching and changing and altering, because we’ve been reminded that even bent, stretched, changed, and altered, we are indeed, still, ourselves.

Thanks so much to everyone who sent birthday wishes! They meant so much. I had a beautiful birthday — writers’ meeting, lunch with a girlfirend, Sunshine Cleaning with William (I loved it: it was touching and moving and the characters were real people instead of space aliens or billionaires), and then dinner with him at Pure Food and Wine (picture below) an incredible gourmet raw food restaurant. We had a “cheese” platter (Dr. Cow Tree Nut Cheese—non-dairy and out of this world), winter salad, lasagne (raw! the “noodles” were thinly sliced zucchini), and chocolate mousse and chocolate-covered strawberries and ice cream made from cashews. It was quite the gustatory adventure. All in all, a great way to inaugurate a new year for me and a new spring all ’round! I have a hunch that spring is going be beautiful, and it won’t take forever to get here. — Victoria 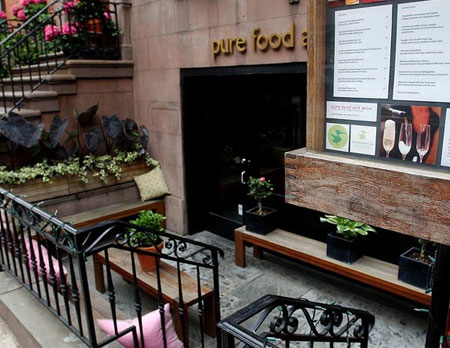