Storms: How to Navigate Life’s Storms

I’m thinking about those times in life when the doubts of faith are many and the difficulties of life are manifold.

Thank God, on the sailing journey of life, those times are few.

Do you remember that time when Simon Peter and the other disciples were sailing on the Sea of Galilee (Matt 14)? Suddenly, unexpectedly, a storm arose quickly and it did so as if it nature was looking for vengeance on the world.

The disciples saw Jesus walking on the water. And Peter jumped ship to join him.

At first, he seemed to manage pretty well. But, before long, the wind and the waves overwhelmed him. He was afraid and began to sink.

Has it ever occurred to you what this story about?

When I was young, I was taught by well-meaning religious people that this story was all about Jesus and his ability to walk on water. He was a miracle worker, you see. Which meant, he was God incognito and, as a consequence, he was really the Commander-and-Chief even over the forces of nature.

Furthermore, I was told, this is a story about Jesus and everyone’s need to put their faith and trust in him to save them from destruction, even to rescue them from the storms of life.

Really?
That’s how most read the story.
Which is why most miss the point entirely.

When I became an adult and, hopefully, a little wise and more spiritually-discerning, I realized this is not a story about Jesus at all. It’s a story about Peter. It’s a story about you and me. Jesus plays a secondary role and, as such, he’s a role model for Peter, as well as for you and me, about the capacity…the possibility…of living life in peace…tranquility…inner calm, even when all around you there are storms…there is chaos and confusion…

Peter was learning, as the story indicates. He managed for a short time doing pretty well. But, before long, he looked around…he lost focus…the storms overwhelmed him…the winds frightened him…and, he began to sink.

Sound familiar?
That’s been the story of my spiritual journey.
So, here’s what I’ve learned.

1. You will have storms.

The winds will howl from time to time. Anybody who tells you differently…isn’t alive. Oh, they may have a heartbeat, but they’re divorced from all reality. Life is damn tough. And, for some people, most of the time.

2. Nobody will rescue you from life’s storms.

If that’s why you’re religious…why you’re sending your hard-earned money to the religious charlatan on television who’s promising, if you do, you’ll be delivered, might as well flush your money down the toilet. Stop looking for a rescuer…a Savior who’s going to deliver you. Jesus made it pretty clear, “In the world, you WILL have trouble…” (John 16:33).

3. You will, and can, learn how to navigate your storms and live more at peace than you know now. How?

Face your storms. They may not be going away any time soon. And, in fact, they may get worse before they lighten up at al.

Embrace your fears. Sometimes, you WILL be afraid. But to be afraid does not mean you’ve lost faith or have a weak faith. People who pretend they aren’t afraid are not exercising faith themselves. They’re just acting strong so you can’t see their weakness.

Forgive your weaknesses. Stop believing this nonsense you hear from radio and television preachers that people of faith are never weak or afraid. Or, that people with strong faith are never doubt or feel spiritually vulnerable. It isn’t so. Everybody sinks occasionally, except the pretenders. And, they do, too. They’ve just fooled you into thinking they don’t.

Find peace within. It may be chaotic around you, but it can and will find the “quiet” within your soul. It’s there. I promise. If you’re focused entirely on the storm, however, and not on the example of the Spiritual Master himself, you’ll sink like Simon Peter.

And, you may sink anyway, from time to time. No worries. So did Peter. But, if there’s anything the Savior does do is offer you a helping hand to get back on our feet and try again. He does not magically put an end to the storms. At least, not every time. But, he’ll show you how to tap your inner Source of strength…your inner peace.

Try making this your spiritual practice and, when the storms do come, and they will come, you will begin to stand.

And, who knows. You might even walk on water one day. 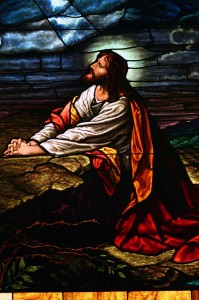 Pray: How Hard Do You Have to Pray to Get an Answer?
archives most recent
More from Beliefnet and our partners
previous posts