Last night, I stayed in Philadelphia near the airport in an older Hampton Inn. I mean, an older, Hampton Inn. Not “old” as in the old, but elegant Waldorf Astoria on Park Avenue, New York City. I mean old, dirty and, well, just old and dirty. As I approached the entrance, I thought to myself, “I bet it stinks in the rooms, the A/C doesn’t work, and the carpet has too much deodorizer in it to kill the smell of sweaty and dirty human feet.

I checked in at the counter and vocalized my thoughts to the desk clerk, “I hope the rooms are in a little better shape than what I’ve seen so far of this Hampton.”

He smiled and said, “We have good housekeepers.”

When I walked up to the door to my room on the first floor, the housekeeper had just finished cleaning and was coming out as I was stepping in. She smiled and spoke with broken English.

Now, you might not know this, but, when you stay in a hotel, if you’re pleased with the service, you’re supposed to leave a tip for the housekeeper on the dresser or on the bed. I have not done this with any regularity, however. I’m trying to change that habit.

In my defense, I have always been a good tipper of servers in restaurants, even when the service is less than desireable. I have made this my practice to do so largely because my stepdaughter was a server during her college days. She struggled to get by almost all the time. She worked hard…really hard…and, often, she worked long hours serving tables and thoughtless customers and she used to tell me, “I hate it when they put me on the Sunday afternoon shift.”

When I asked why, I didn’t like the answer. “Because that’s when the church crowd shows up.”

“What’s so bad about them?”

To which she responded, “Are you kidding?They’re often the most demanding, unappreciative customers I ever have to deal with. And, worse than this, they’re the stingiest with their tips.”

So, I tip servers well. But leave a tip for the housekeeper in a hotel room? Not so good at this practice. But I’m getting better.

I smiled at the housekeeper as she stepped back and I stepped through the door and into the room.

The room was, unexpectedly, very clean. Just like the clerk indicated. Even a little better. I was happily surprised.

Clearly, the housekeeper had gone to great lengths to make an old room feel, smell, and look anything but worn or dirty. No, it was not perfect. But far better than expected.

I was instantly in a better way, as they say.

I proceeded to tidy the room, according to my liking. Having slept hundreds of nights in hotel rooms, I have a little routine I go through to get the room to feel a little more like home. I move chairs around, set up the bathroom with my preferred condiments and then, I open the little plastic bag draped over the ice bucket and fetch a bucket of ice to enjoy with a beverage.

That’s when I noticed the first and only mistake made by the housekeeper. She had forgotten to leave me a plastic insert for the bucket.

I picked up the bucket and walked back to the entrance into the room. I opened the door, not knowing whether she would be down the hall cleaning another room or gone altogether to another floor.

I was happy to find her, however, standing right behind her cart but in front of the door to the room just across the hall.

She must have realized her mistake because, before I could say anything, she pointed to the bucket and said, “I’m sorry. I’ll get you a plastic bag and some ice.”

“Just the little plastic sanitary bag,” I responded. “I can get the ice myself.”

She took the bucket and disappeared down the hall.

The Golden Rule: Just Be Compassionate toward All People

When she returned just minutes later, I  am not exactly sure why but I impulsively reached into my pocket, grabbed my money clip, fingered past the $5 dollar bill, as well as the $10 dollar bill, and grabbed the $20 bill instead.

She struggled with English. But this time, she spoke no words at all. She just stared at the twenty dollar bill as if she was looking at a winning lottery ticket.

I thought, “Clearly, she’s not gotten many tips before.”

“No, no,” was her initial response. “My pleasure.”

I said, “No, no,” right back at her with a smile.  “My pleasure. Thank you for a nice, clean room and for the bucket of ice.”

I closed the door.
I stood there thinking.
It happened spontaneously.
It was over in minutes.
It felt good giving her the twenty.
I could do without it.
She could probably use it.

She would a nicer lunch that day, maybe buy lunch for another housekeeper.

I’m not sure how it made her feel. But I hope half as good as it did me.

Then, I had another thought.

I wish I were more Christian, or Christ-like, in how I think, live, and treat others.

Maybe a little more than I used to be.
But I have a long way to go.

Saint Paul said, “As we have opportunity, let us do good unto all people, but especially to those of the household of faith” (Gal. 6:10).

I used to mistakenly think, as most misinformed Christians do, that these words of Jesus originated with him.

The Golden Rule: Not Original with Jesus?

Some version of what we call the Golden Rule is found in virtually every religion of the world. The Buddha, for example, said, “As I am, so are you. As you are, so am I.”

My point, however, is this: What does being a follower of Jesus mean in today’s world?

Rhetorical. But you get that, right?

I rather suspect…being a follower of Jesus simply means being a compassionate human being, in every situation and toward all people, regardless of who they are, what they look like, what faith they hold, whether or not they believe in anything, no matter their skin color, their sexual orientation, their insider status.

Does any of this ever really matter?

I cannot help but wonder, if being a genuinely compassionate human being toward everyone were the practice of all followers of Jesus, maybe Millennials and other people would not be leaving the Church in record numbers.

Maybe they’d actually be interested in attending such a church…one where compassion is more than a word. Where the Golden Rule is more than a plague on Sunday School walls. 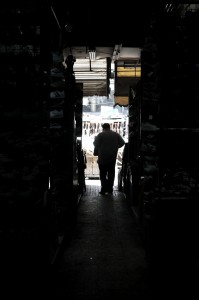 Storms: How to Navigate Life's Storms
archives most recent
More from Beliefnet and our partners
previous posts

Storms: How to Navigate Life's Storms

I’m thinking about those times in life when the doubts of faith are many and the difficulties of life are manifold. Thank God, on the sailing journey of life, those times are few. Do you remember that time when Simon Peter and the other disciples were sailing on the Sea of Galilee (Matt 14)? Suddenly, […]