All summer I had to drive by the Hare Krishna house on my way to beauty school a mere three blocks and every day I drove by and thought, “WE SHOULD GO THERE.” But then I’d finish school, run out the door and bolt home to get in as much sunshine/work/kid time as I could before the summer weather disappeared. In fact, I forgot all about the cult down the block until our friends, SamAndTerry, reminded me. Unlike me, they saw the house and actually PULLED OVER to check for service times. Who’da thunk?

The four of us agreed to meet up there on Sunday afternoon for some chanting, a slide show and a free vegetarian meal. Joel and I arrived early for a change and we were just in time to watch a parade of dress-wearing devotees not only KNEEL before the Hare Krishna altar, but sprawl themselves prone on the floor before him.

Which totally wasn’t creepy at all.

After that, we were greeted by the mysterious and verbose Ksetra (pronounced Chetra) who started talking and pretty much didn’t stop until the service began. Ksetra appeared to be the man of the house and I’m sure he had plenty of interesting things to say, but I was so utterly distracted by the broom he was attempting to grow from the tops of his ears that I couldn’t follow a single word of it. Joel wandered off to take photos (bastard!), so I just did my best to follow along while secretly wishing for a pot of hot wax to magically appear in my hands.

Instead, I was given a copy of the Bhagavad Gita As It Is, a book so difficult to get through that it might actually be worse than the Bible. I did listen well enough to Ksetra to glean that I had NO IDEA where I was. Who knows why, but I had gotten it into my mind that Hare Krishnas were some freak God-fearing Buddhist sect. But no, they are Hindus with a strong belief in a single deity, and an even stronger belief in a transcendental soul. The body is just a host for our spiritual zest, apparently, and the way we live in each body determines the place our souls will land in the next life.

This photo from the inner cover of As It Is illustrates it pretty deftly: 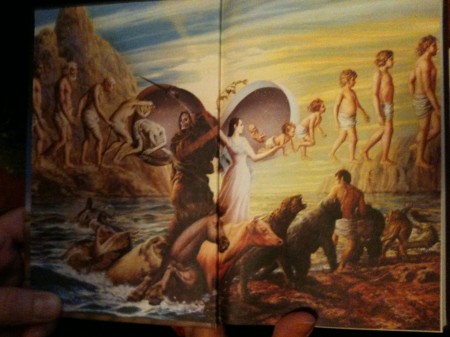 Apparently my soul is going to become a cow in my next life, or something, because I haven’t yet properly dealt with my cheeseburger addiction. (NOR DO I PLAN TO STOP EATING CHEESEBURGERS IN THIS LIFE OR ANY OTHER!)

Anyway, I was hoping the music would put me out of my misery and get Ksetra to stop talking, but unfortunately, he went from talking to CHANTING and he didn’t stop for nearly an hour. Our friends, SamandTerry, joined us right as the music began and it didn’t take long for any of us to wonder if this trip to the cult farm was a bit of a mistake. I mean, if you think Christian music is bad, you should hear this stuff…

It only took a few minutes for my ears to start ringing and that was right around the time we were given finger cymbals and the Hare Krishna version of a hymnal book and asked to join in. But the thing is, if you hand me a hymnal book, I’m going to READ it. 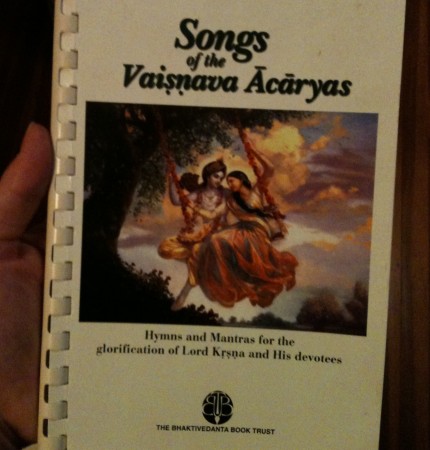 “The transcendental vibration established by the chanting of Hare Krsna, Hare Krsna, Krsna Krsna, Hare Hare, Hare Rama, Hare Rama, Rama Rama, Hare Hare is the sublime method of reviving our Krsna consciousness. As living spiritual souls we are all originally Krsna conscious entities, but due to our association with matter from time immemorial, our consciousness is now polluted by material atmosphere.”

But it got even better. Terry and I might not have achieved perfect harmony with the universe, but we did have enough kismet to point out this excerpt from the hymnal to one another at exactly the same moment:

So we immediately ceased following along with our poisonous serpent lips. (Okay, that’s a lie. We’d never STARTED chanting, but still…) Instead, I looked around at these “devotees” and started noticing that they were mostly women. Mostly WHITE women, in fact. Only a few men and children were sprinkled in for flavor, which made sense to me since the women only had to wear long skirts to fit in, whereas being a male member of this religion not only requires skirt-wearing, but head-shaving.  NOT THAT THERE’S ANYTHING WRONG WITH THAT. I was happy, however, to see that children were welcome and very much included in the shenanigans. 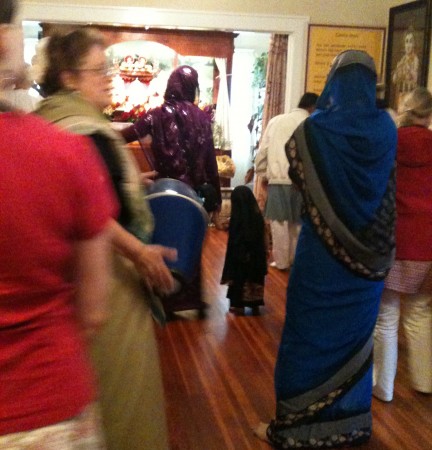 After the music ended (AND NOT A MOMENT TOO SOON!) we were treated to a slide show about one woman’s journey to a harmonious life. Jean Griesser, a.k.a. Visakha Dasi, led us through a series of beautiful photos depicting her move from mainstream Los Angeles to her now-isolated life on a self-sustaining farm in the wild, untamed wilderness of British Columbia. (Yes, that sentence was full of oxymorons, but so is the Hare Krishna philosophy.) Basically, she moved to a Hare Krishna commune where she and her husband have been raising their two daughters away from mainstream society for more than a decade.

I immediately fell into the usual envious stupor I get when I think about the simplicity of people like the Amish and how romantic it sounds to just throw in the towel, make my own clothes and pretend to be a farmer’s wife. (Joel’s fantasy runs along similar lines, except his involves farmers’ daughters.) But as usual, that fantasy was immediately followed by the sick feeling I get when I imagine what it would be like to give up playing Angry Birds on my iPhone. But then Jean made it quite clear that they aren’t exactly living off the grid. Apparently her daughters, who both grew up going to school in the one-room schoolhouse on the compound, both have iPods.

Sure, they aren’t allowed to listen to anything but Hare Krishna music on them, but still. I could only wonder where they got the money to buy them. Do they participate in the greater economy? If so, how? Does Amazon even SHIP to the long, lost wilderness of Canada? And most importantly, how can you profess such obvious disdain for “material things” and then turn around and buy trendy electronics for your teenaged daughters? (If the Hare Krishnas don’t have the answers, maybe the Occupy movement could help me out…)

As so often happens with cults (yes, I said that. Because they qualify…), I was left with far more questions than answers. I wanted to know why, if they are such a peaceful, harmonious religion, did Ksetra and his wife sound EXACTLY like Frank and Estelle Costanza? Why did they not say please and thank you? At all? Ever? (“Gimme that book.” “Get that woman a chair.” Every word dripping with a familiar disdain.)

And seriously, WHEN WAS THE FOOD COMING? 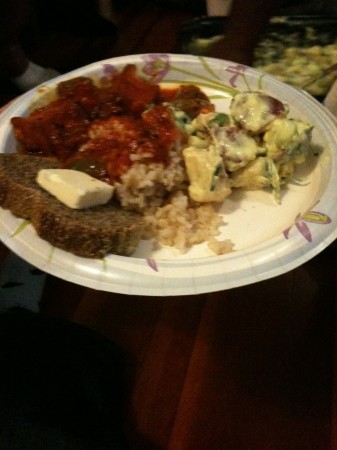 I do have to say that honestly? THE FOOD WAS AMAZING. I wanted to bathe in the sauce they put on the cheese curds. It was spicy without being hot and as far as I’m concerned it was the holy grail of vegetarian cooking. I would honestly go through the torture of the music AGAIN just for the free meal. It was that good.

As I was cleaning up our plates, I approached Jean and we exchanged some pleasantries about her presentation.

“Should I change anything?” She wanted to know how it went over on us non-devotees.

“Uh,” I wasn’t sure what answer she was looking for. “I can’t think of anything.”

“Well do you have any questions?”

“Just the usual ones,” I said. “Like how isolated you are from society and whether or not your children REALLY have the choice to grow up and move away if they want to. That kind of stuff”

“Well.” Jean looked at me with no small amount of pride. “My daughter IS traveling through Europe right now.”

I didn’t have the heart to point out to her that traveling through Europe visiting Hare Krishna temples WITH YOUR DAD isn’t exactly what I was talking about. But I did get the impression that Jean and her fellow Devotees mean well. They really do believe that there is a path to enlightenment and that they have found it. Which really doesn’t make them so different from any other church we’ve visited.

But it won’t ever be for me, unfortunately.

If the ear hair, bad music and cultural elitism hadn’t already ruined me on the religion, the Hare Krishnas would have lost me with the soul. Because I don’t happen to believe we have them and no furry, bald intellectual is going to be able to convince me otherwise. (Trust me, he may not have as much ear fur, but Joel has TRIED.) I simply can’t grok the idea that any part of me – my intellect, my spirit, my self – is separate from my physical body. I AM my cells. Period. Without my physical body, I simply don’t exist and if my “soul” moved on to another body, it wouldn’t be me anymore, now would it?

I would even go so far as to call transcendentalism a spiritual cop-out. I mean, the world is cruel and the physical body is a limiting and often painful way to experience it, so I imagine it must be comforting for certain cultures and religions to say, “BUT THERE IS SO MUCH MORE AFTER THIS.” I can understand how it might even give meaning to the cruelty of biology. But I don’t buy it. And I’m not even sure it’s all that healthy – especially not in Western culture where women learn from an early age that it’s perfectly acceptable to separate themselves from their bodies because, after all, their bodies are flawed and unattractive and not a perfect size 2. If anything, I would argue we need to be MORE in touch with our bodies. We need to soak up every ounce of life we can because there ISN’T another body waiting for us when we die. These are the only ones we’ll ever get.

Remind me to teach that to my daughter. Just as soon as she figures out how to read…

Our First Year of Sundays Swag: Snap it up While it's Hot!
archives most recent
More from Beliefnet and our partners
previous posts