What We Did on Our Summer Vacation, By Joel Gunz

Whoosh! Where has the summer gone? Amanda and I have missed you, dear hot and sweaty reader, and you might be wondering what the hell happened to us the last few weeks as well. Let’s just chalk our hiatus up to a perfect storm of (1) belated summertime, (2) box wine and (3) bikinis on the beach, not to mention (4) gluttony. For punishment, that is. As in: “where should we attend church this week, baby?”

Over the next couple of days I’m going to recap how we spent the dog days of our summer Sundays. Here’s the first installment:

July 31: The Mormons: Maybe This Sunday Would Have Gone Better with Coke

When one of my best friends, a former Mormon (I’ll call him Norman), agreed to come along for the ride, I shouted, “Holy First Wife! This’ll be fun!” Here’s how it went. 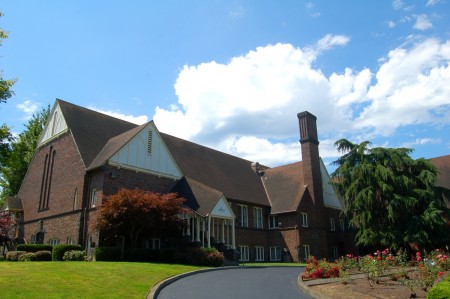 You’ve caught them at your door, gaping at your see-through negligee and you’ve seen their presidential candidates with their sprayed-on hair. Hell, there’s a good chance you’ve caught the Tony Award-winning musical. But until you step into one of their church buildings, there’s no way you’ll get the full-on Mormon experience. Because it’s there that you get to enjoy their fine artwork:

…and get to know them on their own turf:

But first, let’s correct a little matter. “Mormon” and “Mormonism” is kindofa nickname. The real name of the church of Mitt Romney and Donny Osmond is the mouthfilling monicker “Church of Jesus Christ and the Latter Day Saints.” Maybe that’s why they’re totally okay with being called Mormons.

Like Jehovah’s Witnesses, Christian Scientists and members of other offbeat religions, Mormons  are keenly sensitive to public perception and are eager to let you know how “normal” they actually are. One way they do this is by compiling lists of their more famous adherents, like this one:

We attended church on Pioneer Day, a special date in the LDS calendar that commemorates the day the original homesteading Mormons and their wives entered the Promised Land—or, at least, its brackish equivalent in Utah’s Salt Lake valley. If we’d been expecting covered wagons, lacy bonnets or a reenactment of the Miracle of the Seagulls, we would have been disappointed. But Norman had forewarned us that it would probably not be like that.

Instead, we watched a parade of lay preachers take their turn in 10-minute slots, leading the faithful in a discussion of what it means to be a pioneer. (Hint: it has nothing to do with trekking through mountain passes to risk starvation and/or subsequent cannibalism. Instead, it has everything to do with stepping out of your comfort zone to help the needy, or to resist temptations of the flesh, such as dry sex.)

We happened to attend a ward that still meets in an 80-year-old Mormon church with beautiful, high-flown, peaked ceilings in the auditorium (which we were not allowed to photograph) and elaborate brickwork on its exterior. Norman explained that newer churches tend to be more Plain Jane than this, which is true: their gaudy marble and gold leaf regional temples aside, most local Mormon church buildings look as if they had been designed by an American Girl picture book illustrator. But this church was lovely:

The moralism was a little too much for me to take (I’ve concluded that conservative Christians are the most sex-obsessed people in the world), but other than that, the service was an ode to fairly middle-of-the-road Christian values. Though I wasn’t exactly challenged philosophically or spiritually, I can’t complain too much. But I do have a big beef. You might know that a highlight of any service for me is Communion. It’s a chance to get up, stretch my legs and get some free wine. What’s not to love?

But LDS? Not so much. For them, communion is brought around on silver trays that are passed among the congregants like collection plates. It consists of Wonder Bread (naturally enough) and paper fluoride cups of… WATER.

Are you freaking kidding me?!

I know the Mormon creed forbids the use of alcohol, but the least they could do is serve Kool Aid. 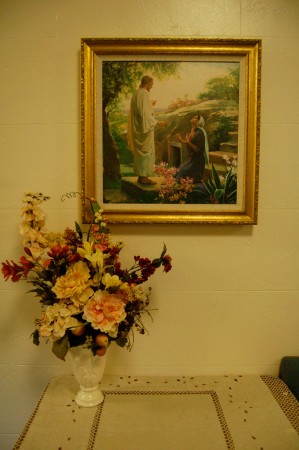 Whitey Jesus Chats Up the Samaritan Woman at the Well.

Next up: The Quakers: Not Just for Breakfast Anymore

B'hey there, Bab'y. B'how YOU doin?
archives most recent
More from Beliefnet and our partners
previous posts