It’s hard to fathom that P.O.D., has been at it for nearly 20 years. My first experience with the band was hearing its raw, independent hardcore album Snuff The Punk back in 1994. P.O.D., was different, however, than most bands from its genre. Front man Sonny Sandoval mostly spewed rap-styled vocals on top of a relentless cocktail of crunchy guitar riffs, funk-infused bass lines and riveting drum tracks.

Just five years later, the hard-working band turned in its beat up van for a tour bus thanks to a record deal with Atlantic. Somehow, this enthusiastic group of tattooed Christian warriors had pushed its way into a general market and became unlikely peers with genre mates such as Rage Against the Machine and Limp Bizkit.

The massive breakthrough, however, didn’t take place until 2001 with the release of the triple platinum album Satellite and smash hits like “Youth of a Nation” and “Boom.” It just so happened that the release date was overshadowed by the tragic events of 9/11. Still, the lasting impact on P.O.D., on popular culture would not be denied and in fact the song “Alive” served as a hope-affirming anthem for an entire generation.

In part one of this two-part Whole Notes interview, Sandoval talks about the impact 9/11 had on P.O.D., the value the band places on relationships, and how he overcame his personal crisis of faith:

Chad Bonham: What do you remember about the range of emotions you experienced on September 11, 2001, the day P.O.D., was set to release its breakthrough album Satellite? 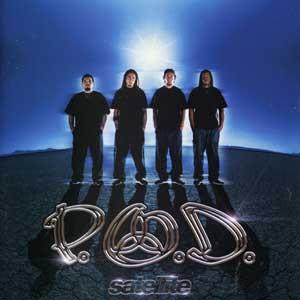 Sonny Sandoval: At that point, we had worked so hard and we were excited about the record. We did a Midnight signing in our hometown of San Diego. We were going to play a big show up in L.A., that day. So we had all these plans but I woke up that morning to a phone call from my mother-in-law (saying), “Turn on the TV.” I turned it on and at that point, nothing else mattered. That’s just how it went down. It wasn’t about music. We couldn’t care less about P.O.D. It was about what was happening to our world. We kind of kept that same mentality going through it. I just wanted to be home with my family. I wanted to get on my hands and knees and make sure I was right with God. “What’s going on Lord?” It wasn’t until we got asked to comment—because people were listening to our record and the song “Alive” was out and it was one of those few songs that—before 9/11—was positive. It was uplifting. It offered hope. At the time, all of the sudden people didn’t care about the sex, drugs and rock and roll industry or Hollywood. Everybody was looking to the meaning of life and searching for God in those desperate times. We just happened to be one of those bands that had a voice. If anything, I was just encouraged by the fact that we’ve always been that way. We didn’t need a sad event like that to bring us together to think about peace and hope. A lot of bands kind of jumped on that bandwagon and the Slipknots of the world weren’t selling records because the music was negative. We were just honored to have a voice at that time.

Bonham: The last time I talked to you (back in 2003), (guitarist) Marcos (Curiel) wasn’t in the band and there was a frayed relationship between him and the band. Now that he’s back and things are good again, how much fun has it been on this latest summer tour to be together as a family?

Sandoval: It’s awesome man. He’s been back in the band for a while now but after we released that last record, we experienced the downside of the industry and we just wanted to take some time off. We were on almost a three-year hiatus. For me, it was just going home and spending time with my family and seeing what direction God was pointing me in for my own life. This tour has been the first time for us to be back on a bus again. It’s like old times. We’re laughing all the time and just goofing around. Those are the parts that I’m thankful for. That’s what relationships are all about. We’re all different guys and we have different mood swings, but there’s just something about all of us when we’re together. We’ve always had that. Despite our differences, when we get together, we just laugh and we love each other. It’s a real relationship.

Bonham: I spoke to Anthony Armstrong (of Red) recently and he talked about how impressed he was with the way you guys are real with everyone you’re around whether they’re believers or not. How important is it for you guys to be real with those who don’t necessarily believe the same way you do?

Sandoval: For sure man. I just think that’s living. If anything, that’s all we’ve known how to do. Once you start crossing all those religious boundaries and lines and feeling like all the sudden your faith is this religion and it becomes a burden on your life, you feel like you’re under a microscope and you can’t move and you can’t breathe. I went through those times in my life where I started to get bitter and angry and you’re like, “Why am I even a Christian? I don’t like any of these people that call themselves Christians.” That’s when I had to go spend time with God and He had to remind me I’m walking with Him and not these people. We’re dealing with all of these dos and don’ts and we’re on the road with Red and we’re hanging out with those guys and they’re going through the same stuff. We’re encouraging one another, “Hey man, stick with Jesus no matter what you’re going through.” At the same time, we’re walking around with real guys and bands with real life situations and they’re hurting and they just need friends. They need people to love on ‘em. You know what I mean? But sometimes we’re in that religious bubble and we don’t know how to act. So we just come out here we hang with these guys and we love ‘em. I’m always open. I’m always just waiting to see if there’s someone I can talk to. I make sure I’m smiling with these guys. I’m high fiving them. We’ve got love. It’s not a religious thing. They’re thinking, “These guys love me. They aren’t like what I thought Christians were at all. They’re pretty cool!” That’s the awesome part.

Check out part two of this interview with Sandoval by clicking HERE.

Keep up with the latest P.O.D., news and download a free copy of the new single “On Fire” by visiting the band’s official website HERE.