Obamacare: The Law of Unintended Consequences (or is it intended?)

Calvin’s Commentary: In the article below from McAlvany Intelligence Adivsor there’s a few negative, horrible consequences described that are already showing up in Obama’s Affordable Health Care Act with the principle writer of Obamacare calling it a “train wreck”. I don’t think for one iota of a second they are unintended. Many experts in high government positions, who are in the know, agree with my thoughts. They have declared that the so-called “unintended consequences,” some of which are listed below, are INTENTIONAL. The entire secret purpose is for the Obama Affordable Care Act to fail because it allows for “Exchanges,” meaning that a health insurance subscriber (company or individual) could opt for another payer (in an “exchange”) and therefore could have his/her medical bills paid for by another provider – providing that payer is included in Obamacare’s approved list of insurers. But, that’s not fully what the Obama/Democratic/Socialists/Progressives want. They want the Federal Government

with the IRS to be totally in charge to be the ONLY option, known as Single Payer. That means that NO ONE will have any choice about anything about their own health care. Whoever is in charge of the Federal Government and the IRS will make every decision about your health care. There will be NO CHOICES WHATSOEVER. The IRS will di

ctate to you, telling you which doctor you can see, what treatment you will get (if any), what prescription medications you can receive, what hospital you’ll be allowed to be admitted to, and whether or not you’re qualified to even be treated. The very young and the very old will have great limitations put upon them under the IRS guidelines to receive treatment to correct or heal, or simply an Rx for pain killers and a referral to get your affairs in order. My supposition is that if a Democratic President and administration is in charge, registered, active, Republicans will have one set of qualifications, while liberal Democratic loyalists will have another. And when the R’s get in charge, the opposite may be leveled against their perceived enemies. Nixon had an enemies list, so it’s not just Obama-nites who keep track of their enemies. Every email you have ever written, every cell phone call, every electronic transmission, every social media posting, maybe even who you listen to on cable TV, every 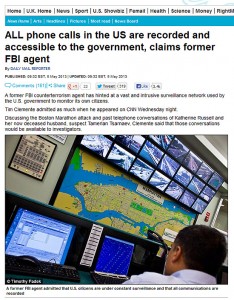 library book you’ve checked out, every letter you’ve ever sent via snail mail (addresses), every check you’ve written and to whom you sent it (like a political opponent), every sales receipt for what you’ve bought online, used a credit card in a department store for, or used a discount grocery store card to buy sugary and trans-fat laden food, evil cigarettes and demon rum, plus every income tax form you’ve ever filed can be stored (and many have testified already have been for years) kept in a huge electronic data warehouse in Utah. They know who you are and what you’re thinking. I’m asking you, right here and right now, are you thinking Death Panels??? Do you really trust your government? If you do, you are in a lonely club of useful idiots. In a recent poll, only 29% said they trust their government. You are not viewed as a human being with God-given rights as the U.S. Constitution declares United States Citizens to be, you and me, we are fly over country, just like Hillary said we are.▬ Donna Calvin ▬ Thursday, August 22, 2013

As Obamacare’s implementation draws ever closer, so does the law of unintended consequences. Promoted as a way to provide healthcare coverage for millions of presently uninsured individuals, the real impact is exactly the opposite: companies are hiring part timers to replace full-time workers, resulting in fewer getting coverage rather than more.

What’s especially delicious is that, in the process, Obama has managed to offend the very people he most wanted to reward: his union supporters. The president of the United Food and Commercial Workers Union, Joseph Hansen, wrote:

“Wait a year. You’ll see tremendous impact as workers have their hours reduced and their incomes reduced. The facts are already starting to show up.”

Indeed they are. Government workers in Pennsylvania, North Carolina, and Indiana are cutting school workers (one of Obama’s strongest supporter sectors, at least up until now) to part-time. In California, Texas, and Michigan, government workers – parks and recreation officials, librarians, and secretaries – are having their hours and benefits (including health insurance) reduced.

Retail establishments are cutting back, as well. The teen apparel chain Forever 21 caught enormous flack over a leaked announcement that they were going to “reclassify” some full-time workers to part time, defined conveniently as 29.5 hours per week, just under the Obamacare definition of full time workers that require full health insurance coverage.

Walmart’s part-time workers represented just 1 to 2 percent of its workforce a couple of years ago. Now they are approaching 10 percent.

The latest jobs numbers from the Bureau of Labor Statistics show the same thing: the US is turning into a part-time worker economy. Here are the numbers:

Today, according to the BLS, there are 117.7 million full-time jobs while part-time jobs have jumped to 27.4 million.

Tyler Durden at Zerohedge looked at the BLS report and concluded that of the nearly one million jobs the economy has created since the first of the year, only 222,000 of them are full time. Three out of four of those million jobs created are part time jobs.

We and other people are hiring part-time because we don’t know what the costs are going to be to hire full-time. We are being cautious.

And this from Darin Hovendick, head of another staffing company:

They have put some of the full-time positions on hold and are hiring part-time employees so they won’t have to pay out the benefits.

When a company moves from full-time people to part-time, however, they still have the same amount of work to do, so they wind up hiring more people. This makes the jobs numbers look good on the surface. Says Phillip Noftsinger, whose company manages the payroll for more than 5,000 small businesses in Roanoke, Virginia:

All this uncertainty is slowing the economy, another unintended consequence. From the Federal Reserve Bank of San Francisco comes word that the US unemployment rate is at least 1.3 percent higher than it otherwise would be without the Obamacare mandate – that translates into about 2 million jobs not created: full-time or part-time.

Naturally, the White House is denying any of this. Jason Furman, chairman of Obama’s Council of Economic Advisers, said “We are seeing no systematic evidence that the Affordable Care Act (an Orwellian title if there ever was one) is having an adverse impact on job growth or the number of hours employees are working.”

Within the modern era, examples of unintended consequences abound. There’s the “safety helmet” mandate in Australia that required bicycle helmets for all riders in order to reduce head injuries. But people stopped riding their bikes because wearing helmets wasn’t “cool,” thus negating the health benefits of bike riding.

There’s Prohibition, probably the most glaring historical example of unintended consequences. People didn’t stop drinking. They just found other ways to indulge, creating a criminal element that increased violent crime and made criminals out of businessmen.

There’s the War on Drugs, intended to suppress the illegal drug trade, but which has instead consolidated and strengthened the drug cartels and put millions of Americans in jail.

There’s “blowback” from CIA interference in foreign governments through its covert operations, such as their funding of the Afghan Mujahedeen, which contributed to the rise of Al-Qaeda.

There’s the introduction of rabbits into Australia for food, resulting in an explosion in the population of rabbits to the point where they have now bec

There’s the introduction of Kudzu into southeastern United States as an ornamental plant that would help prevent erosion in earthworks, but has replaced native plants and virtually taken over significant portions of the land.

One could go on: the “Streisand effect,” “rent control,” the “one day without a car” program in Mexico City to reduce pollution, which backfired (sorry), and so on.

Some of the unintended consequences are silly or humorous. Others are much more serious and long-lasting. Some are delicious, such as Obamacare resulting in exactly the opposite of its intentions and offending its supporters along the way.

Sen. Max Baucus, principal senate author of the Patient Protection and Affordable Care Act (better known as ObamaCare), said he fears it is headed for a “huge train wreck” during an April 17, 2013 hearing with HHS Secretary Kathleen Sebelius 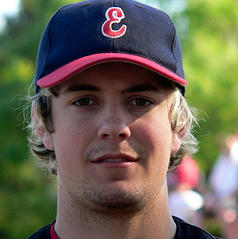 When Blacks Murder White Student...Jesse Jackson Tweets “Senseless violence is frowned upon.”
archives most recent
More from Beliefnet and our partners
previous posts