Calvin’s Commentary: Have you seen any of the pictures shown below that I found in less than a half-second search on the Internet on any newsbroadcast shown on ABC, CBS, NBC, MSNBC, or CNN?  — Twenty, so far, of the most beautiful and oldest Christian Churches are being destroyed in Egypt by Muslim Terrorists. Also, the most recent number of deaths I’ve heard about today is 525 that are associated with this terrorist Muslim Brotherhood “Religion of Peace” uprising demanding Sharia Law, but it’s growing every day by leaps and bounds, so by the time you read this, the carnage will have grown. And here in the USA the low-information voters were lead to believe that Prophet Hussein (a.k.a. Obama) was going to be the great peacemaker and all would be well in the world. But the fundamental change that Prophet Hussein promised of hope has only led to more internal wars, more carnage, more deaths, more anti-Christian bigotry, more torture, rape, more crucifixtions and more destruction. But after all, a prophet can only accomplish so much following that cowboy Bush. It’s all Bush’s fault. Right? Wrong! Following the small sampling of the pictures I found on the Internet, is the story of today in Egypt!  Please pray for the Christians in Egypt.  This carnage of Christians has been going on for a lot longer than just this month as you’ll see in the very first picture.  The Prophet Hussein hasn’t told you.  The news hasn’t told you.  But I ask you pointedly, has your Christian Pastor?  ▬ Donna Calvin ▬ Thursday, August 15, 2013

Warning: Some very graphic pictures follow that include Christian human beings being tortured. 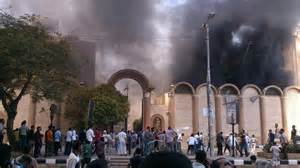 Terrorist Followers of Mursi and the Muslim Brotherhood, all wanting Sharia Law Rampage

At least 20 churches have been attacked in various cities of Egypt in retaliation to evict supporters of the Muslim Brotherhood in Cairo. No anti-Christian movement has produced a situation like this since the Middle Ages. According to an Aug. 14 Fox News report, the assailants threw firebombs at churches, causing them to burn down.

The transitional government in Egypt has declared a state of emergency throughout the country due to the riots in several cities initiated by the followers of Mursi and the Muslim Brotherhood in retaliation for the actions of the security forces and the army in Cairo dissolving the camps claiming the return to power of the ousted president.

The situation has become especially dangerous for Christians of Egypt. Violent groups have destroyed and burned several churches throughout Wednesday. Some sources speak of 20 churches burned.

It has been confirmed that Santa Teresita Church in Assiut, Upper Egypt, the monastery of St. James, and the Jesuit convent school in Meniah were all torched.

Fires have also been reported in churches in el-Arish and Ezbet Nakhl in Greater Cairo. Also, the historic churches of Abraham and the Virgin Mary in Menya burned after Mursi supporters vandalized the windows and doors in order to start the fire from within.

Various news agencies reported that attackers threw Molotov cocktails at Coptic Church in Sohag, a city with a large Christian population. The MENA news agency reported that the church had been burned. Two other churches were attacked in the proviencia of Meniah, suffering partial damage.

Rodeo Clown Gets Banned for Life for Wearing Obama Mask!
archives most recent
More from Beliefnet and our partners
previous posts