Calvin’s Questions: What do you think about all this, schools embarrassing children who are trying to do good and working for good causes? Consider this, if you will when making your comments…Are schools promoting too many causes in classes that are making students react? Should schools just focus on reading, writing and arithmetic and forget about causes? I recall being given UNESCO cans to take trick or treating when I was in school and that was over 50 years ago!  Are schools promoting causes and making students better people? But then giving them a double-minded message when they respond to objectionable teenage solutions to what schools have promoted? Or is it just society and TV commercials bringing these causes and pressuring extremely sensitive and immature minds to make decisions about subjects they are not yet equipped to handle in a proper order? If the Ten Commandments are banned in schools, then what morality should be promoted? Years ago and continuing, The National Education Association claimed that The Ten Commandments could harm children and they have since been banned from public schools. So, I ask you, is promoting breast cancer awareness, a pink day awareness at one school, going too far? Is it right to suspend a boy for growing long hair if he’s doing it to help children who have had cancer? What’s your opinion? You be the judge. (This is totally aside from this item, but just FYI, there is something you need to know about an organization mentioned in the first item below.  All pro-life organizations of faith that I know of refuse to acknowledge Susan B. Koman since it has been discovered they donate heavily to Planned Predators (there is no such thing as Planned Parenthood – predators kill, parenthood gives life).  In fact, Susan B. Koman is so prejudiced against life of the unborn, they “fired” the woman who was in charge when she said they would stop contributing to the murder of the unborn — and then immediately appointed someone who would continue to fund the murder of the unborn.  – –

See Pro-Life Breast Cancer Survivor to Komen: De-Fund Planned …
I had never before been able to support Komen’s Race For The Cure or buy any of its pink merchandise.
To validate this woman’s story, click ↓↓↓↓
www.lifenews.com/2012/02/15/pro-life-breast-cancer

And lick on the logo banner below ↓↓↓ ↓ to help an organization who refuses to help murder babies!

Are schools being overly insensitive? Unfair? Or Justified?

A Texas student was reportedly sent home from school for his boisterous outfit at an annual “Pink Day” in honor of breast cancer on Friday.  Having lost his mother to the disease last year, 17-year-old Dustin Drake went head to toe in a bright pink wig, pink glasses, a pink shirt, pink tutu, pink knee-high socks, and pink shoes with the Susan B. Komen label.

“Everything was pink,” he summarized.  “[Breast cancer awareness] close to my heart, the way I feel about it.”

But school administrators objected to the outfit, and according to CBS11, pulled Drake out of class and called his father.

“My reaction was a little of disgust toward the school district that they would have a Pink Out and then send people home that were above their standard,” Ben Drake, the boy’s father commented.

Dustin Drakes speaks to CBS11 about the significance of his outfit. (Photo: CBS11)

The day is particularly special for the teen because “Pink Day” fell just three days before his mother died last year, he said.  At the time, he wore the exact same wild outfit in an attempt to cheer her up.

“To me, it’s probably the last thing she saw,” Drake told CBS11 with emotion.  “Battling cancer is all a mind game. You have to stay strong in your head to be strong in your body.”

“Students and staff were given the option to elect to wear jeans and a pink t-shirt,” a statement read.  They added that they were aware of how the boy’s mother died, but that he wasn’t the only one punished for the garment violation, and that parents were allowed to bring approved clothing to school.

Ohio Student Suspended for Growing Out Hair to Donate

Zachary Aufderheide has run afoul of his Ohio high school’s dress code because of his desire to grow his hair long enough to donate it to Locks of Love, an organization that provides wigs to needy children who’ve lost their hair because of medical problems.

Zachary, 17, of Canton is about an inch away from the 10 inches of hair he needs to donate to the organization. Faced with an ultimatum, the Canton South High School junior decided to accept an in-school suspension rather than cut his ponytail.

The minimum length of hair needed for a hairpiece is 10 inches, according the Locks of Love website.

Zachary said he is passionate about donating hair to the organization because he was picked on as a child and now wants to help sick children who might have lost their hair avoid the feelings he experienced when he was teased.

“I was picked on so I know where they’re coming from, I know how they feel so I sort of sympathize with them because I’ve been there,” he said Monday.

Zachary’s mother, Robin, said she understood and respected the school’s dress code, but wanted officials to make an exception in her son’s case.

She said her son went to a school board meeting in September, explained what he was doing and asked them to consider allowing him to reach his goal.

She said board members came up to him after the meeting and commended his efforts, but said the board had voted to uphold the school’s dress code, without giving him an explanation.

The school’s principal told her son he had until Monday to get his hair cut, she said.

The school’s principal, Todd Osborn, has not replied to requests for comment placed by ABCNews.com as of this writing.

Robin Aufderheide said she was surprised by the board’s decision, but her son wasn’t.

“I feel pretty disappointed with their decision because, honestly, I really put a lot of heart and soul into my demonstration, like, my presentation of the idea to them, and then when they just all unanimously voted against it … it was just kind of heartbreaking to me,” he said.

According to the dress code in the Canton Local School District’s student handbook, “Hair for male students shall be neat and clean and shall not be worn covering the eyes, in a ponytail, or extending beyond the bottom of the regular shirt collar.”

Zachary isn’t sure what will happen after the two-day suspension ends, but says if he cut his hair before reaching his goal, “then, personally, that would be admitting defeat to them. It would be meaning that I would just give up on what I view as important to myself. So this is more or less like a battle of my morals and my values, really.”

After he donates his hair, he said, he’ll be happy to maintain it at regulation length.

UPDATE: 10/30/2012 – Heard on local news in Ohio – The school relented and said he could continue to grow his “locks” until after the Thanksgiving break, but he has to cut it before he comes back after Thanksgiving break.  – DCalvin

DISCLAIMER: Beliefnet puts paid advertisements on “Watchwoman on the Wall” blog site including some that would never be approved of by the King James Bible, Pastor Ernie Sanders of Doers of the Word Church, What’s Right-What’s Left Radio Ministry, the Voice of the Christian Resistance, Geauga County Right to Life and Donna Calvin.  We at www.WRWL.org do not condone, endorse, adhere to, practice or believe in many of the topics and some of what other bloggers promote or their religions at Beliefnet.  However, Mrs. Calvin has no control of what Beliefnet displays.   She blogs at Beliefnet because she is in the missionary field ministering to true believers posting articles and commentaries informing pro-life, conservative Christians of recent anti-Christian acts and hostile legislation to God’s Agenda and His Will for the world.  Hopefully, unbelievers will read these along with the salvation message of Jesus Christ as written in the Gospel of John, Chapter 3, according to the King James Bible, and be saved.  A missionary must go into the unbelievers’ territory to reach them.  Her mission is to Proclaim Warning to a Nation that has forgotten their Lord and Savior Jesus Christ, the only Truth, the Life, and the only Way to the One God the Father. (Posted 10/30/12) 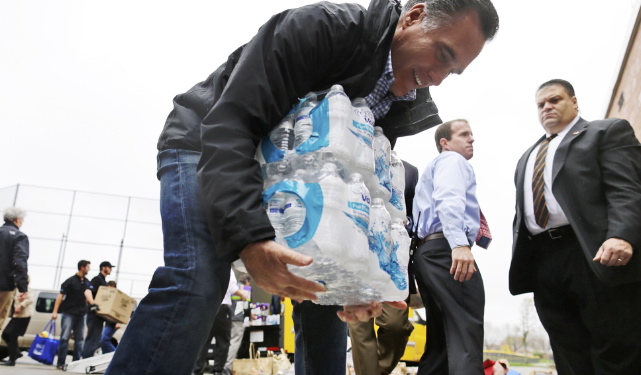