Watchwoman’s Editorial Comment: Here at Watchwoman on the Wall we do not speak in the language of illusion. The sodomites and lesbians are fornicators. God calls them an abomination. Therefore, I have changed every word where the media, even the alternative media, falls into the pitfall of allowing sodomites to form the debate by stealing the language, nor I will not tolerate it here in the article below. I have changed the word to what God calls these fornicators. SODOMITES. And there can be no marriage between two men or two women because God has already ruled that marriage is between one man and won woman. So every time they use their words, I will call it what God calls it – sodomite legalized fornication, not marriage.  (DNC=Does Nothing Clean!)  ▬Donna Calvin ▬ Monday, July 30, 2012

The Democrat party leadership has gone full retard and will be launching itself off the nearest cliff this November.

According to Politico, the DNC will include the support of sodomite legalized fornication in its platform to be unveiled at its convention in early September. The Platform Drafting Committee approved the language at a meeting in Minneapolis but it won’t be official until an August 10 meeting in Detroit. From there, it will be promoted at the DNC Convention in Charlotte, North Carolina. A source at the Minneapolis meeting said that they think the inclusion of sodomite legalized fornication into the platform is “not controversial”.

To compound the “what the hell are they thinking” question, there are also rumors that Elizabeth “Princess Wanamakabucks” Warren will be the keynote address at that convention, where she will no doubt push the “you didn’t build that” meme. Considering that Obama had to cut a commercial to try and stem the self-imposed bleeding his statement made, it’s possible that one side will be running from the other and the center of the floor will be as empty as a junior high school dance.

From a strictly moralist perspective, if they believe their stand is right they can and should adopt it regardless of the political cost. I don’t agree with them, but if they have the heart to stand up for it, good on them.

From a strictly political perspective, this platform is a death sentence for every democrat running for office outside of any district or state not firmly in democrat hands by a margin of 10% or more.

This move signals that the DNC leadership knows that the rest of the election is now almost a foregone conclusion, and it’s going to be a disaster for them. Obama has spent the last three months and most of his cash trying to define Romney and destroy his popularity and the best he has managed to do is appear to trail closely. The DNC leadership knows that within weeks Romney will unleash advertising buys highlighting Romney’s positive message and Obama’s failures that will make Obama shrivel like a snail on a salt flat. Worse for democrats, polling shows that instead of picking up seats in the Senate and House, democrats will likely lose the Senate and suffer more losses in the House. The best the DNC can hope for is to strip off the moderate disguise and lurch to the left as a beacon of socialism and hedonism to shore up their flagging base for what they see as coming tsunami of electoral failures.

Thank you, “messup”, for bringing this to my attention ▬ Donna 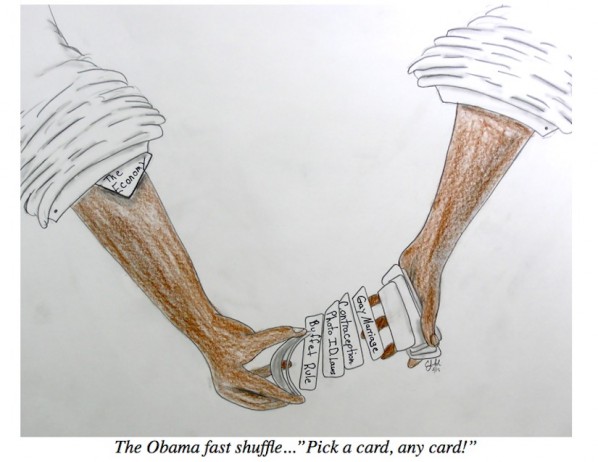 Today's Politically Incorrect Cartoon - Sunday, July 29, 2012 - Who Will Shoulder The Obamacare Burden???
archives most recent
More from Beliefnet and our partners
previous posts