READ THE WORD OF GOD FROM THE KING JAMES VERSION

[Romans 1:23-31]  And changed the glory of the uncorruptible God into an image made like to corruptible man, and to birds, and fourfooted beasts, and creeping things.  [  24]  Wherefore God also gave them up to uncleanness through the lusts of their own hearts, to dishonour their own bodies between themselves: [  25]  Who changed the truth of God into a lie, and worshipped and served the creature more than the  Creator, who is blessed for ever. Amen. [  26]  For this cause God gave them up unto vile affections: for even their women did change the natural use into that which is against nature: [  27]  And likewise also the men, leaving the natural use of the woman, burned in their lust one toward another; men with men working that which is unseemly, and receiving in themselves that recompence of their error which was meet. [  28]  And even as they did not like to retain God in their knowledge, God gave them over to a reprobate mind, to do those things which are not convenient; [  29]  Being filled with all unrighteousness, fornication, wickedness, covetousness, maliciousness; full of envy, murder, debate, deceit, malignity; whisperers, [  30]  Backbiters, haters of God, despiteful, proud, boasters, inventors of evil things, disobedient to parents, [  31]  Without understanding, covenantbreakers, without natural affection, implacable, unmerciful: [  32]  Who knowing the judgment of God, that they which commit such things are worthy of death, not only do the same, but have pleasure in them that do them.  (Emphasis added)

[John 8:44]  Ye are of your father the devil, and the lusts of your father ye will do. He was a murderer from the beginning, and abode not in the truth, because there is no truth in him. When he speaketh a lie, he speaketh of his own: for he is a liar, and the father of it. 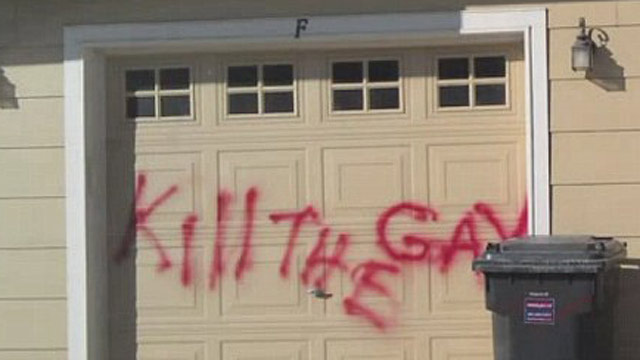 A lesbian couple who claimed they were victims of a hate crime have been arrested after police determined they staged the incidents.

On Oct. 28, Aimee Whitchurch, 37, and Christel Conklin, 29, called police and reported the words “Kill the Gay” were scrawled in red spray paint on the garage door of their Parker, Colo., home.

The next day, the couple told deputies they found a noose hanging on the handle of their front door.

The women told officers they believed the incidents were retaliation from their neighbors and homeowner’s association, who had complained the couple did not pick up after their dogs.

Due to the nature of the crimes, the Douglas County Sheriff’s Office worked in tandem with the FBI to investigate. After reviewing witness statements, authorities determined Whitchurch and Conklin had staged the incidents.

Both women are charged with criminal mischief and false reporting. Whitchurch faces an additional charge of forgery.

She told ABC’s Denver affiliate KMGH-TV police were mistaken and vowed to fight the charges.

INSPIRATIONAL!!! Personal Testimony of what Jesus Christ can do! - Steve Vaus
archives most recent
More from Beliefnet and our partners
previous posts