Ohhhh yeeeah!!!  Second show time!!  This show started with a big group performance of that My Chemical Romance song “Sing” that apparently gave my wife chill bumps.  That’s cool, it looks like this week’s contestants are a lot more diverse than last weeks.  Let’s get going!

The Dartmouth Aires – The Aires rocked some Stevie Wonder and some afros!  Totally awesome.  While the arrangement, like many college groups, lacked in subtlety, it wasn’t short on fun.  Their lead guy is really what made it for me.  What a soulful voice!  Good times!

The Pentatonix – This group of five picked that Katie Perry song about aliens.  I think they were really good but man the song was just bad.  Their great style really overcame that though, and the sound effects were especially interesting.  I liked it but I didn’t love it.

Messiah’s Men – This inspiring group came as refugees from Liberia.  They performed “People Get Ready” and it was as awesome as their outfits promised.  While the arrangement was pretty basic, they nailed it from front to back and really brought it down at the end.

Sonos – An a capella group who relies on effects pedals is a new twist, but unfortunately the group wasn’t able to use those effects here.  Would have been neat to check out!  Instead they performed “Wicked Game” and while the arrangement had potential, it was really kind of a mess for the most part.  It got a bit better towards the end, but it never quite had that full a capella sound that you hope to hear from groups at this level.

At the break it was time to send a group home, and unfortunately the judges chose Messiah’s Men.  You know, both of the first two seasons I pretty much agreed with the judges throughout.  This season, I’ve disagreed with every decision they have made.  Ah well.  At least my boys in Committed showed up to jam out for a bit.

The Collective – The Collective busted out the Adele hit “Rolling in the Deep.”  It was an interesting arrangement of the song, picking some interesting harmonies and performing them well.  As a whole though, it didn’t seem to quite come together.  It was really close though, hopefully we’ll get to see them grow a little.

Soul’d Out – This group of youngsters were really just kind of odd.  They sounded alright but the arrangement wasn’t as good as it could have been.  Still, for a bunch of high schoolers, pretty dang good!

North Shore – Every show needs a group of wily veterans, North Shore is that group.  These guys go back to the oldies with style.  While there were more intricate arrangements tonight, they were consistent and fun enough to watch.  It was nice to hear a classic doo wop group on the show.

Deltones – A college group born out of being rejected from other groups, they gave one of the more emotional performances of the opening nights.  Overall the lead vocals weren’t strong enough to carry it, while the rest of the group seemed really on.  It was okay, but it definitely didn’t blow me away.  Props to them for choosing a softer song for the first performance.

At the end of the night it was time to make the last elimination of this round.  It was the high school kids that got the boot.  All of these kids are really talented, but weren’t quite ready yet.  I would have been happy to see them go on, but would be happier to see some of them make it back on the show in the future.

All in all, tonight’s groups weren’t as strong as last week’s.  I’m sure more favorites will emerge throughout the competition, but right now the only groups that stick out are Delilah and the Pentatonix.  Can’t wait for next week! 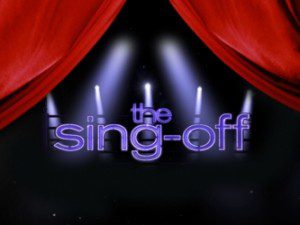 The Sing-Off Episode 1!!
archives most recent
More from Beliefnet and our partners
previous posts