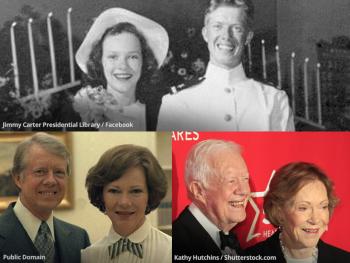 Former President Carter and former First Lady Rosalynn Carter celebrated a unique milestone on Thursday. The two celebrated 76 years of marriage, making them the longest wed presidential couple in US history. The Jimmy Carter Presidential Library shared the announcement via Twitter, saying, “Happy 76th Wedding Anniversary to our favorite couple!  They are setting a new record every day as the longest-married presidential couple!!!” The Tweet included a picture of the two on their wedding day. They surpass Former President George HW Bush and Barbara Bush, who had been married for over 73 years until Barbara’s death in 2018.

Unlike last year’s anniversary, which included guests like former President Bill Clinton and Garth Brooks, this year’s celebration was a laid-back affair in their home state of Georgia, with a special meal and President Carter’s favorite staple of ice cream. President Carter, 97, had known Rosalynn, 94, basically her whole as she was a friend of his younger sister, Ruth Carter. Romance blossomed between the two in 1945. Jimmy was back in Georgia for the summer, ready to start his final year in Annapolis. When plans with another girl fell through one night, he found Rosalynn walking with his sister and asked her out to a movie. The two shared their first kiss and Jimmy knew he’d found the girl he was going to marry. They were married in the summer of 1946 and spent the first part of their marriage as a Navy family, with Rosalynn embracing the many moves and changes that came with being a Navy wife. They returned to Georgia in 1953 after Jimmy’s father died. There Rosalynn found a new role in helping run Jimmy’s father’s peanut farm. About a decade after their return home to Georgia, Jimmy’s aspirations would become political. He won a seat in the Georgia State Senate in 1962.

Despite achieving his dream of being in the Navy, political accomplishments that would eventually lead him to be elected the 39th president of the United States of America,  and winning the Nobel Peace Prize, Carter told CSPAN in 2015, “The best thing I ever did was marrying Rosalynn. That’s the pinnacle of my life.” After 76 years and a family of 4 children and 22 grandchildren and great-grandchildren, it appears to be an event of a lasting legacy indeed.

Actress Mila Kunis sat down with “Entertainment Tonight” to discuss her new film, Luckiest Girl Alive and also talked about her husband, Ashton Kutcher’s, recent health scare. In an episode of “Running Wild with Bear Grylls” last month, Kutcher revealed that he had recently suffered from a rare form of the disease vasculitis. “[It] […]

Hailey Bieber Denies Rumors She Dated Justin Bieber While He Was With Selena Gomez: “…it was very much completely closed.”

Hailey Bieber joined the “Call Her Daddy” podcast with host Alex Cooper Wednesday. One area, in particular, Cooper and Bieber discussed were the rumors of a rivalry between Hailey and Selena Gomez, Bieber’s former on-again-off-again girlfriend. “I respect her; there’s no drama, personally,” Hailey said after stating she had in fact talked to Gomez […]