The Abbey and the Basilica 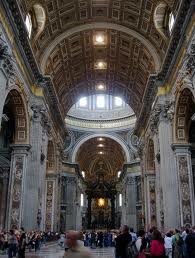 In the Great Ecclesiastical Bake-Off of 2011 between the Royal Wedding and the Papal Beatification, the historian in me can only say that it’s terrific to see Westminster Abbey and St. Peter’s Basilica elbowing each other for pride of place in the public eye. And don’t the two look fabulous!

Both events have been arranged to put some shine on a couple of pretty tarnished institutions. The fairytale of Kate and Will will presumably enable the British Monarchy to limp well into the 21st century as a living reminder of what England used to be. Of course, the fact that it took a commoner to rescue the House of Windsor from endless tawdry scandal might suggest to the Brits that it would be a lot less bother just to let the royal line live on at Madame Tussaud’s.

And speaking of endless tawdry scandal, John Paul II’s Excellent Posthumous Adventure seeks to return the papacy to the glory days of the last century, when its escutcheon read Liberator of Poland, not Shield of Pedophilia. Whether or not the last Bishop of Rome deserves his fast track to sainthood, it’s a mixed blessing to be reminded that within recent memory, he bestrode this narrow world like a colossus.