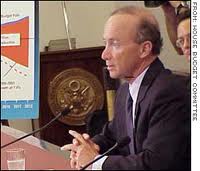 It’s possible that Indiana guv Mitch Daniels is a few inches farther away from running for the GOP presidential nomination after last night’s take-out of Osama Bin Laden, but here’s what the New York Times had from him in yesterday’s paper:

“I’m getting letters from all over the damn country, and some of them are pretty moving,” Mr. Daniels said in an interview last week at the Capitol in Indianapolis, where his friends believe he is inching closer to exploring a candidacy. He added, “It can’t help but affect you.”

If you’re a short, balding, unknown 61-year-old intellectual sort of guy (and believe me, it takes one to know one), you’ve got to be pretty overwhelmed by letters from all over urging you to run for the most powerful job in the world. So why not declare an end to your self-proclaimed truce on social issues? If it’s only Planned Parenthood that’s standing between you and the Oval Office, let’s go to war!

Let there be no doubt: No one gets to run for president on the GOP ticket without toeing the abortion line of the moment. That’s the Tea Party for you.