In case you missed this episode or you would like to watch it again, ABC has the full episode online available for your viewing.

Nine teams remain in this fifth week of Expedition Impossible, with the The Gypsies dominating the competition so far by winning the first four legs of the race. The other teams are the Fab 3, the Football Players, the Cops, No Limits, the Fishermen, the Country Boys, the California Girls, and the New York Firemen. Given the physically challenging rigors of this competition, it is no surprise that the four teams who have fallen by the wayside so far were either all-female teams or teams with elderly members.

The trek begins with the Gypsies leading off first and then the remaining eight teams departing in two groups of four according to order they finished last week. The first checkpoint is at a desert artist’s tent, which they will locate after finding a map along their route. At the artist’s tent, the teams will use henna to draw a map copied on one of their teammate’s body skin. The map will guide them to their next checkpoint. So, instead of taking a map with them, someone will be wearing the map as a large henna tattoo! Here, they must be patient to draw the map correctly and ensure that it doesn’t get smeared in the heat en route to their next destination. The only all-female team remaining, the California Girls, are the last to leave the tent.

The next trek goes 6 miles to the Atlas Mountains where they repel near a waterfall 200 feet down the side of the cliff. The trek is not too difficult and the repelling is mildly challenging as it is slippery in places. Erik (the blind guy in the No Limits team) does a remarkable job literally feeling his way down the rope along the slope. He slips and slides a bit here and there, but he’s light on his feet and keeps himself upright and poised against the slope in front of him. On the other hand, Brittany from the California Girls has a lot of trouble working her way down, putting her last place team even further behind the rest of the pack.

After the rappelling exercise, teams follow the canyon river below to the next checkpoint. It is a rather rough and sometimes wet hike through the narrow canyon channels, calling for a bit of minor rope work along the way to navigate the slippery path in the rocky stream. The terrain gives Erik of the No Limits team enough trouble that his team falls back into the middle of the pack. The Gypsies, as expected, are the first team to reach the checkpoint.

The next task to to search under the rocks along the river bed to find a fish fossil, which they will then take to an open market half a mile way and trade it in for a fish dinner. With thousands of rocks lying around, it becomes a matter of patience, perseverance and luck to find one and move on. The Gypsies are first to find a fossil rock and make their way to the open market in the village. After this, it’s time to hike to the check-in point where the first team to arrive will be treated with calls from home. The Gypsies once again win the day’s competition for a perfect record so far!

Two teams, however, make a serious error in not bringing their fossil fish rock with them to trade at the market. Oops! The Firemen and No Limits have to go back to the stream bed to retrieve a fossil. Luckily for them, the California Girls are still lagging way behind in last place and haven’t shown up at the stream bed yet. In a magnanimous gesture, the Gypsies decide to give the winner’s prize of the call from home to the No Limits team. The No Limits team members tearfully appreciate the gesture and “hug it out” with the Gypsies after the video call placed in an SUV. As expected, the California Girls are the last team into camp.

To start the next day, elimination day, teams must unlock a Moroccan puzzle box, which contains the next set of instructions. Starting out first, Gypsies are able to open the puzzle first. From there, they trek five miles over rugged ground to the next checkpoint. The Firemen, however, have trouble figuring out how to open the box and fall behind the pack. The Gypsies then take a wrong turn and realized they’re going the wrong way. They have to retrace their steps, losing their lead and allowing the Fab 3 to jump into first place for the first time this week.

The next task is to guide a key out from the bottom of a box with holes in it, which is needed to unlock the ropes for the final repelling challenge. The Fab 3, getting the lead after the Gypsies earlier navigation miscue, are the first to repel down the mountain and reach the finish line, with the Gypsies following racing not far behind on their heels in second place. But in the frantic race to the finish, John from the Gypsies twists his ankle and goes down, bringing the Gypsies to a sudden halt as the Fab 3 go on to win the race as the first team to beat the Gypsies. The Gypsies limp into second place with the Football Players following in third. The second real race is between the two teams trying to avoid finishing in last place and being eliminated, the NY Firemen and the California Girls. After a whole day of running in last place, the California Girls finally get gutsy and win the foot race to pass up and knock out the NY Firemen.

For once, it’s not a bad day for the gals. The Fab 3 team with a female team member wins the day and the only all-female team remaining survives to race another day!

All it takes is one injury to take a team permanently out of competition, so will John’s ankle injury be the Gypsies team’s downfall in the coming week? 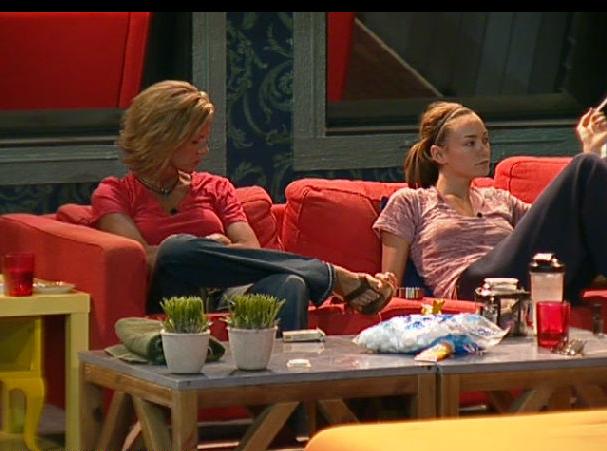