Welcome to the next episode of Big Brother, where one House Guest will be evicted and one new HoH will take over the House! We’re also due to hear the results of America’s votes tonight! Given what the vote questions about the contestants were, expect some crushed egos when those are announced.

The Chenbot tells us that “the battle lines have blurred”, an apt description for some of the minds in the household. Cassi and Shelly are on the block, with Cassi as the original intended target. Even so, Shelly has to work to keep in favor of her housemates. It brings her on the verge of tears to think that they might oust her. She says that she doesn’t like being devious and a liar, setting a bad example for her kid who might be watching.

Cassi talks with Rachel and they get into it, with Rachel telling Cassi that her “game is horrible”. It’s obvious they’ll never strike a deal, much less ever make up. Cassi tells Rachel off, which leads to Rachel going into to tears as she then talks with Jordan. “Don’t cry”, says Jordan as Shelly continues her meltdown. Jordan worries that Rachel’s emotional instability is going to be the vet’s alliance downfall as the rest of the House targets her in the future. Cassi meanwhile talks with Jeff and swears on her father and says she’s “not a dumb-ass” as Jeff doesn’t get where she’s coming from either. Cassi is having a hard time convincing her housemates why they shouldn’t evict her — in fact, she’s doing just the opposite, they end up liking her even less.

We are then treated with a a couple of hometown visits, starting with Adam’s girlfriend. She tells the story of how much Adam wanted to be on the show, losing something like 100 pounds to get in shape. “Adam is a master of the game”, she says? Oh, really? He’s lucky Dominic won the PoV or he might have been the one going home this week! Then we go to Dominic’s hometown, where his friend talks about his flirtatious relation with Daniele. And we’re only seeing just a small part of what those two are doing during the course of this budding showmance.

The eviction ceremony begins. Cassi and Shelly speak in their turns to defend themselves. The votes? The vets Rachel, Jeff, and Brandon start by voting against Cassi. To complete the avalanche, all of the rest of them (except Daniele and Porche by virtue of being Golden Key holders) follow suit in a 9-0 final vote. The Chenbot informs Shelly that she becomes the third Golden Key holder and then Cassi is seen off by her former housemates. Notably, Rachel is the only one who is openly smiling with a rather evil “gotcha!” grin.

And Julie’s brief interview with Cassi and the housemates come on to say final words to Cassi, the Rachel goes even further to publicly say to Cassi that “she is the worst game player ever“. Whoa, what an insult! Rachel is developing such a transparent evil reputation already seen by her housemates after only two weeks that she’s setting herself up for a big downfall. Karma isn’t done with her quite yet. As we’ll soon find out, the payback isn’t going to be this week.

The HoH competition is for the contestants to correctly the answer which contestant America voted for some of the 20 questions in the poll. Kalia is first out, then Jeff. Adam, Lawon, and Dominic get the next question wrong and go out. Rachel and Brandon both get the next question wrong, so they still are in it. Then Rachel is the last person standing after Jeff gets the next question wrong. Rachel wins HoH! Whoops, there are probably some housemates that now regret not putting her on the block when they had the chance now that she is again in charge with two fewer newbies in the house.

In closing, the Chenbot hints to us that there will be a celebrity visit on Sunday’s episode and shake-up in the game is coming up soon.

Isn’t it funny that, in spite of the fluctuating changes in alliances and relationships, history once again repeats itself? 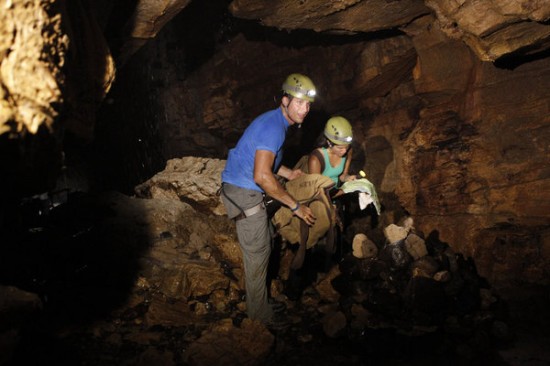 Love in the Wild Episode 4 Recap: Stay Together, Play Together
archives most recent
More from Beliefnet and our partners
previous posts